A dusting of snow – and the odd flurry – has fallen on Brighton and Hove this evening (Thursday 12 January).

One seasoned commuter said that this would almost certainly mean no trains tomorrow – not least because the train drivers belonging to Aslef – their union – would be on strike.

A number of bus services were affected this evening, particularly in the hillier suburbs. A list is included below.

There was also talk of a power cut in Portslade mid-evening.

Those who work with homeless people across the city have been trying to contact them. Anyone who is concerned about a rough sleeper should call 0300 500 0914.

Here are some of the early tweets, pictures and videos, including a rather random one (scroll to the bottom) that should raise a smile on a chilly evening.

so much snow in brighton! pic.twitter.com/gbd6cFZ5Uk 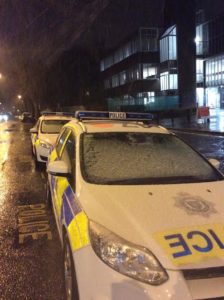 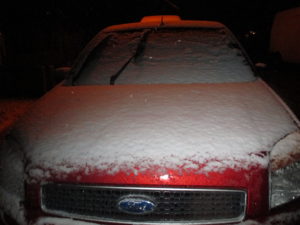 From Brighton and Hove Buses
Service 12/12A/12X – Services to and from Eastbourne are now diverted via the A26 and A27 in both directions. Seaford is still served by services that terminate in Seaford. We currently cannot serve the East Dean area.
Service 22 – Cannot currently serve Langley Crescent, Woodingdean.
Service 28/29 – Services at the moment are now terminating at Uckfield due to an accident on the A26. We cannot serve Crowborough or Tunbridge Wells.
Service 46 – Services are now back to normal route
Service 50 – Services towards Hollingdean can not currently serve the Hollingdean loop. Services are heading to Sainsbury’s on Lewes Road to turn around and head back up Hollingdean Road.

Compass said that the number 37 in Brighton was “suspended due to snow making driving conditions too dangerous on the hills”.

And finally – Channel 4 shows its sense of humour with a Jon Snow video even if it is the wrong kind of Snow.

We presume THIS is why #Snow is trending, right? pic.twitter.com/It7Yy3c56j