Three men were held during a raid on a kebab shop in Hove by immigration enforcement officials.

The raid was carried out on Nayeb, on the corner of The Drive and Church Road, Hove, on Monday evening (9 January).

It was described as an “intelligence-led operation” with three men, from 18 to 30 years old, and all from Afghanistan, being removed from the premises.

The head of the Kent and Sussex Immigration Enforcement Team Richard Lederle said that the three had entered the country illegally.

Two of the men were taken to an immigration detention centre to await removal from the country.

The third man, who had an outstanding application with the Home Office, was escorted from the premises and told that he must report regularly while his case is dealt with. 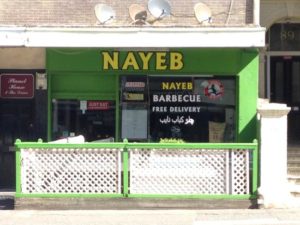 It would have to show that appropriate “right to work” document checks were carried out, such as seeing a passport or Home Office document confirming permission to work.

Mr Lederle said: “We are working hard to tackle illegal working and those who abuse the UK’s immigration system.

“Using illegal labour is not victimless crime. It defrauds the Treasury, depriving vital public services like schools and hospitals of funds, it undercuts honest businesses and it cheats legitimate job seekers of employment opportunities. It also exploits some of society’s most vulnerable people.

“We are happy to work with employers who want to play by the rules. However, those who attempt to cheat the rules can expect to be caught and to face stiff financial consequences.”

Nayeb is run by Ali Nasseri, who came to Britain from Afghanistan and who turns 28 this month. He co-owns the business with Eskandar Hajezadah, of Bloomsbury Place, Kemp Town.

Their company, Nayeb Ltd, was set up in April last year. In September the premises were given a 1 out of 5 food hygiene rating – requires major improvement.