Brighton and Hove Liberal Democrats are campaigning for a second referendum on the outcome of talks to leave the European Union – or Brexit.

The local party started campaigning on the issue at the weekend by collecting signatures on a petition.

The petition calls for Brighton and Hove’s three MPs to vote against the start of formal Brexit talks – known as triggering article 50 – unless the government agrees to a referendum on the “destination”.

The Lib Dems argue that a narrow Leave vote does not give the Prime Minister Theresa May a blank cheque to take away Britain’s membership of the single market and our rights to live, work and travel freely in Europe.

The party’s parliamentary candidate for Hove, Carrie Hynds, 29, said: “68.5 per cent of voters in Brighton and Hove voted Remain.

“We accept that the UK voted narrowly to leave the European Union but leaving the single market was not on the ballot paper and there was no detail proposed in the referendum.

“A hard Brexit would represent a real threat to the economy of Brighton and Hove and to the hard-won peace process in my home country of Northern Ireland.

“There is no mandate for this Tory government, led by an unelected Prime Minister, to implement hard Brexit. 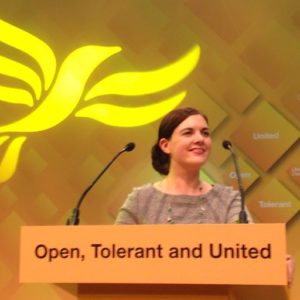 “The most democratic option is to give people a say with a clear question reflecting the actual type of Brexit on the table.”

Former BHASVIC student Emily Tester, 21, the party’s parliamentary candidate for Brighton Kemptown, said: “Those of us who are just starting out are very worried about our prospects.

“We are watching as the interconnected world we believe in is being picked apart and the opportunities to work and live in Europe that millions of Brits already benefit from are being taken away from our generation.

“The government simply isn’t listening to us. I am proud that the Liberal Democrats are standing up for the 48 per cent.”

The Lib Dems, who held their autumn conference this year in Brighton, have had a substantial revival in the city, with their membership nearly four times what it was two years ago.

“They tell us they worry about Brexit and the rise of right-wing populism here, in Europe and in America.

“They want to stand up for liberal values. Labour is increasingly pandering to the populist UKIP agenda. With the ‘Trump’ wing of the Tory party in control of the government, we need to work together with our European neighbours.

“The Lib Dems are the only party fighting to keep Britain open, tolerant and united.”