Police in Brighton investigating a report of the rape of a woman have released a second picture of a man they want to talk to. 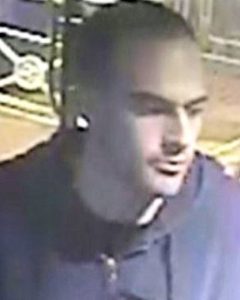 He was captured on CCTV following the rape in Middle Street, Brighton, at 4am on Wednesday 30 November.

A 19-year-old woman had met the suspect in a nightclub and then at Buddies fish and chip along the seafront. They went to an alleyway where she said he raped her.

The suspect is described as white, around 5′ 8″, aged about 24, with a thin face, bald or shaved head and clean shaven. He had prominent ears and was wearing a low round neck light coloured long sleeved blue top and blue jeans.

Detective Constable Jenny Pietersen said: “Our original appeal in December, shortly after the incident, resulted in several calls offering information. However we still need to identify and trace this man and we hope the second photo we have acquired will further jog memories.”

At the time the image was recorded, the man was accompanied by another man, believed to be a friend, who is not regarded as a suspect but who police would also like to talk to as he may have valuable information.

Anyone with information about the man shown, his friend or witnesses, should contact police by emailing 101@sussex.pnn.police.uk, quoting serial 104 of 30/11.

Details can also be submitted to the independent charity Crimestoppers anonymously on 0800 555 111. (www.crimestoppers-uk.org)

Or they can be reported online to https://sussex.police.uk/contact-us/response-to-appeal/ or by calling 101.