A road in Hove was closed for a bariatric rescue this afternoon (Saturday 28 January).

Bariatric rescues involve helping or moving obese patients, especially if they become stuck in their home.

East Sussex Fire and Rescue Service sent three fire engines to close a stretch of Davigdor Road while a woman was helped from a property in the street.

Bariatric rescues have become increasingly common in the past few years, with the fire service carrying out more than one a month on average – many of them in Brighton and Hove.

They have become a separate category in official statistics as Britain’s obesity crisis has grown.

Firefighters often have to use specialist equipment, including special slings, and have had to remove windows, walls or fittings such as bannisters. 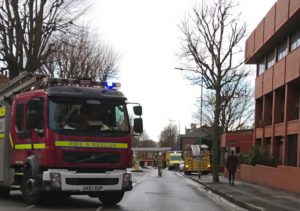 The South East Coast Ambulance Service has reported dealing with about ten bariatric patients a week over the past three years.

It has spent more than half a million pounds on specialist ambulances and equipment and given hundreds of paramedics specialist training.

Dr Kerrigan said: “The bigger and bigger they get the less confident they feel about engaging with the outside world.”