Brighton and Hove Albion have completed the signing of Glenn Murray from AFC Bournemouth on a permanent transfer, on undisclosed terms. 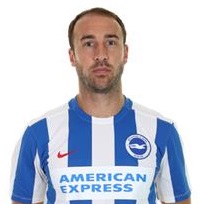 Murray has scored 15 goals in 28 appearances since his loan arrival from the Cherries this summer and has agreed a deal until June 2019.

Manager Chris Hughton said: “Glenn has made a big contribution in the first half of the season, not only in terms of his goals, but as a senior member of the squad.

“He has done exactly what we had hoped he would do when we took him on loan from Bournemouth in the summer, and has been a crucial part of our team and squad so far this season. I am delighted that he wants to commit his long-term future to the club.”

Murray, 33, began his career with his hometown club Carlisle United, with two spells either side of a stint in North America with Wilmington Hammerheads.

Subsequent spells followed with Stockport County and Rochdale before his first spell with Albion, signing for Dean Wilkins in a £300,000 move in January 2007.

He fired 56 goals in his first spell, helping Albion win the League One championship in 2011, before moving to Crystal Palace.

Murray scored 47 times for the Eagles, helping them to promotion to the Premier League in 2013, and after a brief spell on loan at Reading in 2014, made a big-money move to Bournemouth in the summer of 2015.

Despite finding opportunities limited at Dean Court, he still found the net four times from just seven starts for the Cherries, including a memorable winner at Stamford Bridge.

He joined Albion on a season loan deal in July 2016; and he has now scored 71 of his 165 career goals for the Seagulls.

Meanwhile, Brighton and Hove Albion have recalled goalkeeper Christian Walton from his loan spell at Luton Town, as a precautionary measure, following an injury to Niki Maenpaa.

Manager Chris Hughton said, “While Niki’s injury is not as bad as we first feared, he will be sidelined for a short period of time, and during his period of rehabilitation we will need goalkeeping cover for David Stockdale.

“Christian has been playing regularly at Luton Town and has really benefitted from his time there; ideally he would have continued, but he is now needed back here to ensure we have proper cover in the goalkeeping position.”

Walton has played 33 times for Luton this season, adding to his four senior appearances for Albion, and ten games played on loan during spells at Bury and Plymouth Argyle.