A Brighton yarnbomber who has previously turned her street into a woolly wonderland has now installed a crochet hat dispenser at her neighbourhood bike store. 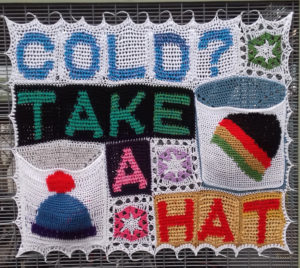 Dani Ahrens started knitting decorations to brighten up the Cobden Road bike shed last autumn, when she created a crochet tree to cover the lockup’s corner.

In winter, this was replaced by snowman, but when that went missing, Dani decided to replace it with something more neighbourly – and the hat dispenser was born.

Dani, whose previous wool-based community projects include covering cars in Southampton Street with crochet ladybirds in 2013 as part of a living streets art gallery, said: “I had been thinking about it for quite a while, this bicycle shed, is really ugly needsometing. I could turn the corner into a tree then I thought I would like to do something for each season.

“I put the snowman on in December and I thought that was done for winter, but then somebody took it down and it came back tyo me by a random passer by and I thought I had better put something else up there and I don’t really know what gave me the idea. 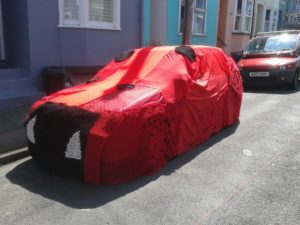 “I originally thought I would put scarves up but then I thought hats would be quicker to knit.

“They are for anyone who feels the need of a hat. I’m hoping that people are taking them to give them to somebody who does.

“They are going very quickly. I go there every day to get my bike and most days there are fewer hats there. I’m replenishing them but other people are as well. There were two there yesterday which I hadn’t seen before and they’ve both gone now.

“Ideally I would do something for spring, but I’m quite busy with knitting for my Artists’ Open House in May.” 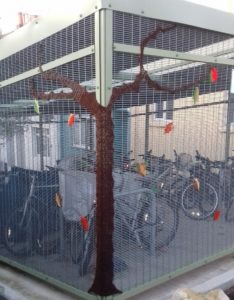 Dani’s Open House will be in Southampton Street at the bright yellow house close to the Constant Service.