Snowcat trail hits Brighton in May

First we had snowdogs – now another charity has launched its own snowcat trail to raise money for lost moggies. 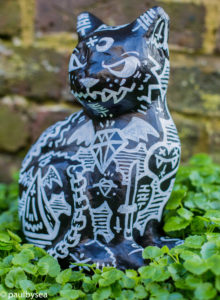 Almost 50 magical snowcats will be playing hide and seek this May for Lost Cats Brighton around Hanover – which is also soon to become home to one of the snowdogs from the Martlets Hospice trail which hit Brighton and Hove last November.

Each of the snowcats has been created with a distinct personality by a different local artist, who have all generously donated their time and talent to help raise much-needed cash for the popular cat rescue and re-homing charity.

The cat-sized Snowcats will all be visible from the street, peering out of windows in the Hanover area of Brighton. The trail will remain in place throughout May, making it an ideal outdoors activity for school children and parents during half term – and for visitors to the Open Artists Houses also taking place that month.

The Snowcats are on the lookout for potential new owners, as each one will be found a new home at an auction in June, with all the proceeds going to Lost Cats Brighton.

There are also mystery prizes to be won, setting off with a trail map, available at various local businesses, the challenge is for you to locate all of the Snowcats.

The Snowcat Trail is the idea of Lucy Clifford, who has combined two of her passions, cats and art, to help Lost Cats Brighton raise funds needed to find the charity a new home, following the death of their founder earlier this year.

She said: “Brighton’s Snowcat Trail has been made extra special by the incredible generosity of so many local artists, with different skills, styles, and techniques.

“The trail is an eclectic cat walk and a fresh air art gallery that will appeal to a wide audience: from primary school children seeking out the beautiful cats, to art connoisseurs planning to bid for a unique work of art at the auction in June.”

The snowcats include cool tattooed cats, courtesy of Black Sail Tattoos; and a tribute to 80’s pop icon Jimmy Somerville including an autograph and photograph of the singer.

Artist Katherine Griffin, known locally for her Freddie Mercury the Bowie Cat mural on the corner of Richmond and Windmill Street, has created a snowcat which pays homage to a range of classic characters, including Woodstock from Charlie Brown and Bert and Ernie from Sesame Street. 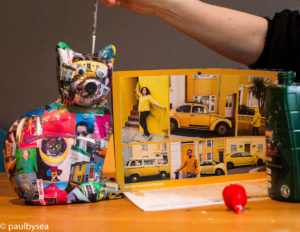 Nicky Bagilhole’s colourful snowcat has been created entirely from pictures of the Hanover area of Brighton taken by residents who played a game of spot the matching house and car – or dog, bicycle or child, which were also made into a calendar to raise money for the Amaze charity.

Nicky said: “My snowcat is in honour of Hanover, a very colourful place to live. The pictures I’ve used are all by local residents and are a celebration of our community – the people, the houses and of course the matching cars.

“The colour matching concept immediately caught the imagination of the creative people on the hill, via Hanover Community Notice Board on Facebook. I have brought their photos together to brighten up your day and raise money for charity in the form of a calendar, and now a cat!”

Brighton born and bred artist Jason McQuillen is also well known around town for his street art, recently winning a competition for his work brightening up the toilet cubicles in the Wahoo bar. Jason has produced a unique take on the ever-popular black and white cat. 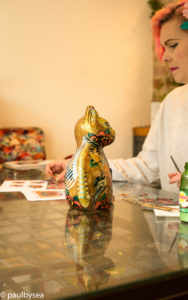 Robin Hill and her snowcat

Artist Robin Hill pasted cutouts onto her papier mache cat, which she has then preserved with varnish, a technique known as decoupage. Robin said: “I love to decoupage unusual items, so when I was offered the opportunity to decorate a snowcat I snapped it up! It’s been such fun and for a really great local cause.”

Lost Cats Brighton rescues and looks after abandoned, unwanted and homeless cats, with the ultimate aim of rehoming them. And through its Facebook page and website, the charity plays an invaluable role in the community reuniting dozens of lost cats every month with their relieved and delighted owners.

For 17 years the charity operated from founder Ron Ayres’ rented bungalow. Sadly, Ron passed away in January and now Lost Cats itself needs to find a new home.

Sue Burt, a volunteer with the charity, said: “This is such a wonderful idea and I’m really looking forward to seeing all of the Snowcats. As a volunteer at Lost Cats Brighton, I’m so grateful to Lucy and her team for organising the event, and to all of the amazing artists for making it possible. Their support is greatly appreciated as we move forward and continue the legacy left by Ron.” 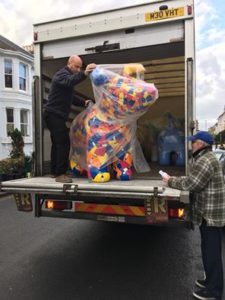 Meanwhile, the Process Pup snowdog, which was bought by residents of Hanover following a crowdfunded campaign, is to find a permanent home in the garden of the Hanover Community Garden Centre.

It’s currently sitting in the window of fundraiser organiser Ruth Farnell’s home in Queen’s Park Road, where it can be seen watching the world go by.