A guest at a Brighton hotel spoke of a chance encounter with terrorist Khalid Masood before he mowed down 20 people on Westminster Bridge and killed a policeman outside Parliament.

Mr Petersen spoke to television reporters, telling the BBC: “How the hell can we predict who wants to do these kind of things?

“There was nothing in the man’s demeanour, nothing whatsoever, that made me think you’ve got to be wary of this guy.

“And the guy was calm. There was nothing in his conduct or demeanour that would have let me get a feeling there’s something weird about this guy – and he’s just on his way to commit mass murder.”

Mr Petersen told ITV: “I stood next to an atrocious killer without knowing, without having any inkling what he was about to plan to do.

“And the shocking realisation that also comes with … that somebody can be what you would call normal … is firmly on his way to do something absolutely atrocious.” 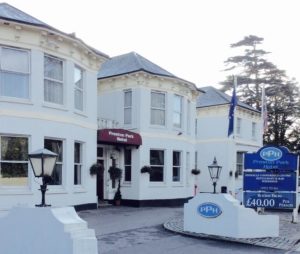 The Preston Park Hotel in Brighton

Masood checked out on Wednesday (22 March) with hotel staff saying that he was a lovely guest.

The hotel manager Sabeur Tuomi said that “he was a very friendly person” and that he checked out peacefully.

According to The Sun newspaper, as he checked out he told receptionists that he was he was going to London. He added: “It isn’t what it used to be.”

Sussex Police said that it wanted to reassure the public after with Assistant Chief Constable Laurence Taylor saying yesterday: “Our thoughts are with all those affected and who died in yesterday’s horrific attack in London and our colleagues at the Metropolitan Police who lost a brave officer.

“Our officers will do whatever we can to support our colleagues in the days and weeks that follow as the investigation unfolds.

“In light of yesterday’s event the threat level hasn’t changed. It has remained severe since 2014.

“There is no current evidence of any specific threat to community safety in Sussex and policing across the country continues to operate as usual. “We urge the public to remain alert but not alarmed – our policing tactics and security measures are constantly reviewed and we, along with our partners, are working around the clock to keep our cities as safe.

“If you see anything suspicious then let us know using the anti-terrorist hotline 0800 789321 or 999 in an emergency.

“Acts of terrorism and hate crimes are committed by a small minority of people and are not representative of the public.

“This is a time for us all to work closely together and unite against those who seek, through violence and extremism, to intimidate or cause fear.”

Masood was born as Adrian Russell Ajao in Dartford, Kent. He was later known as Adrian Elms before converting to Islam. He had a track record of violence an offending.

Police are still trying to piece together how he became a terrorist and who, if anyone, helped him before the attack on Wednesday.