i360 to remain closed for another day while tests continue

The i360 will remain closed for another day while investigations as to what caused it to get stuck for two hours on Saturday continue. 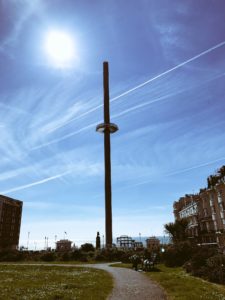 The attraction came to a halt with a jerk at about 3.30pm on Saturday, and after the guests were brought back down to ground, the ride was closed.

The attraction originally said it hoped to reopen tomorrow, but this afternoon it said that it would be closed again until at least Wednesday.

Dominic Dean, who was in the pod when it got stuck on Saturday, said: “We had gone right to the top and were starting to come down again when it had a bit of jolt and come to a stop.

“We were offered water and apple juice and the camping loo and its tent came out. There was a queue, but fortunately I didn’t need to use it.

“We’ve been offered a refund and another flight. I would go on it again but I would like to know what the issues was that caused the stoppage. Nothing that’s been said has explained what’s happened.”

An i360 spokeswoman said: “The i360 will be closed tomorrow while technicians continue investigations and checks. We are contacting customers who have pre-booked tickets and offering them the opportunity to return within three months or claim a refund.

“We would like to thank our customers for their patience and apologise for any inconvenience this causes.

“Those on the affected flight were offered a refund and complimentary tickets to return another time.

“The pod was almost full and it stopped for around two hours. Guests were cared for by our in-flight crew and offered complimentary drinks from the on-board Sky Bar until the pod was successfully returned to ground level.”

This is the fifth time the i360 has been closed since it opened last August. In September, it was grounded three times because of oversensitive motion sensors. In February, a snapped data cable closed it for two days.

Teen arrested after man slashed in face by broken bottle