A pizza chain with branches in Brighton and Hove was raided by immigration officers yesterday, with five people now facing deportation, two of whom were working in the city. 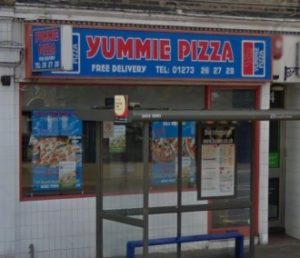 Yummie Pizza, which has takeaways in Islingword Road, Brighton, and Church Road, Hove, is now facing a fine of up to £20,000 per worker, or £100,000 in total, unless it can prove that proper checks were carried out.

Takeaways in Eastbourne and Peacehaven were raided at the same time, 4.40pm yesterday (Tuesday 4 April).

The raids follow another one at the Regency Restaurant in King’s Road, Brighton, on Monday morning in which one worker was detained and is also facing deportation. The restaurant says he is one of 45 staff and had only just joined the team.

The Yummies and Regency raids are not related.

“We are happy to work with businesses in Sussex to ensure the right pre-employment checks are carried out but those intent on operating outside the law will be found and will be punished.

“All of our operations are intelligence led and I would encourage people with detailed and specific information about illegal immigration to contact us.”

A 33-year-old Morrocan man, found at Yummie Pizza in Hove, was found to have overstayed his visa. He was arrested and detained while steps are taken to remove him from the UK.

At Yummie Pizza in Brighton, a 33-year-old Turkish man was found to be a failed asylum seeker and was arrested and detained while steps are taken to remove him from the UK.

Regency Restaurant manager Emilio Savvides said of Monday’s raid: “Out of the 45 persons that are employed here, only one person that had just recently joined us was questioned from the Regency Restaurant in relation to his immigration status.

“The restaurant have nothing to do with the flat whatsoever as they are tenanted.

“We have been here in this location for the past 30 years and we have a large loyal local following.”