Updated at 9.50am: Ten people have died, including three terrorists, in the attacks late last night (Saturday 3 June) in London Bridge and Borough Market.

And 48 people were taken to hospital after a white van was driven on to the pavement and three men started stabbing people. 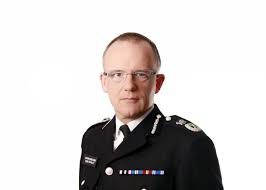 There are currently no trains between Brighton and London Bridge and none are expected to run for the next few hours. But London Bridge Station has reopened and train companies hope to resume a normal service as soon as possible.

“We are treating this as a terrorist incident and a full investigation is already under way led by the Met’s Counter Terrorism Command.

“At 10.08pm yesterday evening we began to receive reports that a vehicle had struck pedestrians on London Bridge.

“The vehicle continued to drive from London Bridge to Borough Market.

“The suspects then left the vehicle and a number of people were stabbed, including an on-duty British Transport Police officer who was responding to the incident at London Bridge.

“He received serious but not life-threatening injuries. His family has been informed.

“The suspects had been confronted and shot by the police within eight minutes of the first call.

“The suspects were wearing what looked like explosive vests but these were later established to be hoaxes. 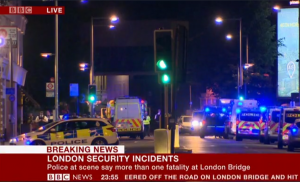 “The ongoing operation is led by the Met, working closely with British Transport Police, City of London Police, the London Ambulance Service and the London Fire Brigade.

“At this stage, we believe that six people have died in addition to the three attackers shot dead by police. And at least 20 casualties have been taken to six hospitals across London.

“I’d like to repeat our request for the public to avoid the following areas: London Bridge and Borough Market. This is to allow emergency services to deal with this incident.

“The investigation is being led by the Counter Terrorism Command and we would ask anybody who has images or film of the incident to pass those to police by uploading it at www.ukpoliceimageappeal.co.uk.

“Our thoughts are with all those involved and those responding to both incidents. Those who are concerned about a loved one can contact the Casualty Bureau on 08000 961233.

“We are reviewing and planning to strengthen our policing stance across London over the forthcoming days and there will be additional police and officers deployed across the capital.

“I would like to ask the public to remain vigilant and let us know if they see anything suspicious that causes them concern and dial 999 immediately.”

London Ambulance Service assistant director of operations Peter Rhodes said: “Our thoughts are with all of those affected by the incident at London Bridge and their friends and family.

“We took 48 patients to five hospitals across London and treated a number of others at the scene for minor injuries. Police have confirmed that sadly, six people also died at the scene.

“We were called to the incident at 10.07pm, with the first ambulance crew arriving within six minutes.

“We sent over 80 of our medics to the scene including ambulance crews, advanced paramedics, specialist response teams and an advanced trauma team from London’s Air Ambulance.

“We declared a major incident and worked closely with other members of the emergency services at the scene.

“Our priority was to assess patients and ensure that they were treated and taken to hospital as soon as possible.

“I would like to thank our staff and the other emergency services who responded.

“As we are still very busy, we would urge the public to only call us in a genuine emergency and to call 111 for urgent healthcare advice.”