‘Driveway’ homes back before planners for a fifth time

A scheme to build new homes on an old driveway and narrow parking strip in Portslade will be decided by planners in the coming week. 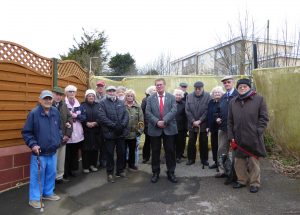 The site was once the driveway to Rowan House before a terrace known as Hillcourt Mews was built.

Mr Elliott, of Findon, near Worthing, has submitted four previous sets of plans for the site. All have been turned down.

And neighbours are angry about the latest scheme, with 18 of them, along with North Portslade councillor Peter Atkinson, formally objecting to Brighton and Hove City Council.

The scheme is due to be decided by the council’s Planning Committee at Hove Town Hall on Wednesday (12 July) and an official report recommends granting planning permission.

Councillor Atkinson said that he was surprised by this but he hopes to persuade the committee to accept neighbours’ concerns.

He said: “This situation has been going on for four years now … Any development on this very cramped site would have a serious impact on nearby residents.

“There have already been significant problems with residents’ homes in terms of damage caused by lorries and construction during the Hillcourt Mews development.

“This is having a very negative impact on the mental health of the residents who live either side of this site.

“The constant fear that the developer will just keep submitting applications with the obvious potential to significantly affect their quality of life is a psychological ‘sword of Damocles’ hovering over the mental wellbeing of these residents.”

Councillor Atkinson added: “I’m not against the use of small sites for building housing.

“I sit on the city council’s Housing Committee and our Housing Department is being ever more innovative in the use of small plots of land for residential development.

“This particular site, though, is simply not appropriate in my opinion.”

Neighbours are concerned about a loss of privacy and worried that the building work itself, being so close to existing homes, will cause damage.

Councillor Atkinson asked for the plans be “called in” – so that the decision could be made by elected councillors rather than officials, giving neighbours a chance to set out their concerns.