The Grand hotel and the Brighton Centre on Brighton seafront have been evacuated after a bomb scare this afternoon (Sunday 10 September).

And the A259 seafront road has been closed between the i360 and the Palace Pier. West Street is also closed to traffic and pedestrians.

Police cordon round the back of the Brighton Centre because of the bomb threat to the Grand Hotel @jowadsworth pic.twitter.com/h0pDgyk36w

The New Club – in King’s Road to the west of Regency Square – said that it had been ordered to close by Sussex Police although the Hilton Brighton Metropole is still open.

The force said that a 999 call came in shortly after 4.30pm and that as a result it was dealing with a “security issue”.

Bomb disposal experts have been called to the area for the second time in a few days. A scare in Peacehaven on Wednesday turned out to be an old fuel tank.

Sussex Police said: “Police have been working with management at the Grand hotel in King’s Road, Brighton. after an anonymous phone call was received at the hotel at 4.30pm, alleging that there was an explosive device there.

“Hotel management decided to evacuate the hotel, a decision supported by the police, and the hotel was swiftly and safely evacuated.

“Thorough searches and inquiries are taking place to establish as soon as possible whether or not the call is a genuine one.

“Military ordnance disposal are attending as part of the search

“Nothing untoward has been found at this time.

“In the meantime roads and car parks in the immediate vicinity have been closed as part of the precautions.

“Drivers and pedestrians are advised that there will be some inevitable delays and diversions until the incident is safely resolved.” 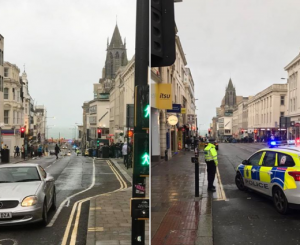 Many of those who have been evacuated – in windy and rainy conditions – are believed to have gone next door to the Hilton Brighton Metropole.

Scottish Daily Record reporter Torcuil Crichton said that the seafront was taped off.

Sussex Police advised people to avoid the area for the time being.

We’ve been told to close by the police due to what seems a serious incident at the Grand Hotel. We hope all is well. #Brighton

Traffic jams were reported on the seafront and in roads leading to and from the front.

Brighton seafront taped off by @sussex_police at Grand hotel after reports of “bomb scare”. Guests say were evacuated to metropole #TUC17