Brighton charity cyclists rack up a ‘mile in the sky’

A team of cyclists racked up a “mile in the sky” early this morning as they aim to raise tens of thousands of pounds for the mayor’s charities in Brighton and Hove. 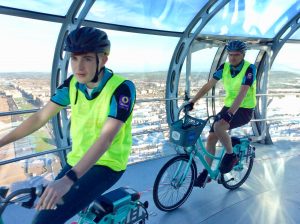 They usually peddle property but today (Thursday 3 May) they were pedalling the new blue BTN Bike Share bicycles around the i360 on Brighton seafront.

After riding the first mile of their four-day fundraiser 450ft above the prom, the 45-strong crew – from the Brighton and Hove Property Consortium – were sent on their way by the Lord Lieutenant of East Sussex Peter Field and the deputy mayor of Brighton and Hove Councillor Dee Simson.

The cyclists are off to Brussels for their four-day sponsored ride, with a stop at the European Parliament hemicycle in the Belgian capital.

They will be riding back via Bruges, the Menin Gate war memorial at Ypres – and Lille, just over the border in French Flanders. 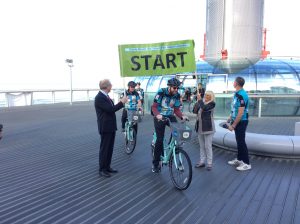 They will take part in the formal start of the Brighton Fringe tonight by video link when the deputy mayor will join them to count down to the start of the fireworks.

At the Brighton end of the live link, the mayor of Brighton and Hove Councillor Mo Marsh will be helping to get the fireworks display under way.

From Fringe to Festival, the mayor will be out on Saturday morning for the Children’s Parade.

And she will greet the Brighton to Brussels cyclists on their return to New Road, Brighton, at 5pm on Sunday (6 May).

The mayor’s charities this year are the Martlets Hospice, Albion in the Community, RISE, the Sussex Heart Charity and the Clock Tower Sanctuary.