Garry Starr, the disgruntled actor who has been kicked out of the Royal Shakespeare company due to ‘artistic differences’, sets himself a tough task: to save theatre by performing vignettes that showcase all genres of theatre all in under 60 minutes.

From the outset, Damien Warren-Smith (Former front-man for Plague of Idiots) captured the densely packed audience at The Burrow. He’s dressed at first in a ruff, black jacket and very skimpy white tights, and he’s off, performing every form of theatre under the sun in fifty minutes. These include Physical Theatre, ballet, Classical Theatre, Mask, Burlesque, Musical Theatre, Slapstick, Contemporary Dance, Butoh,Romantic Comedy, Tragedy and Clowning

Quite how this theatrical alchemy could achieve such a thing or why Garry was sacked, as his backstory as an erstwhile Shakespearian actor attests, we never find out. But what we do find out is Garry Starr is electric and elastic, commanding the room with a relaxed intensity throughout a set that is carefully crafted and perfectly executed. The piece was expertly by Cal Mc Crystal and it shows!
Damien’s ability to cajole great performances from the audience, effortlessly balancing humiliation and self-deprecation, is a delight. There aren’t many evenings where you’ll see Harold Pinter plays deconstructed and full frontal nudity ballet on the same bill but Garry Starr… performs everything. Theatre? Saved 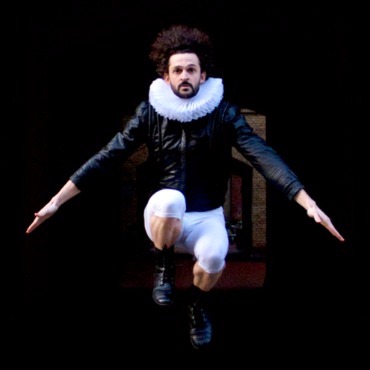