A four-storey block of classrooms is proposed to replace a temporary block at BHASVIC (Brighton, Hove and Sussex VI Form College).

Neighbours sent 60 letters of support and 18 objecting to the proposals which are due to go before Brighton and Hove City Council Planning Committee at Hove Town Hall this afternoon (Wednesday 6 June).

Loss of on-site parking spaces was the biggest issue for people opposing the plans for the Old Shoreham Road facing side of the college.

Labour councillor Jackie O’Quinn, who represents Goldsmid, complained that people living in her ward were not consulted as the college is – just – in the neighbouring Hove Park ward.

In her letter of objection she points out that her residents are the ones who will experience the impact of the development.

Parking and traffic were the key issues that she highlighted after speaking with people in the area.

She said: “The college lost all of their parking in the upper car park when the Copper building was built a short while ago and the college were issued with parking permits for approximately 28 teaching staff to make up this difference.

“No other key workers receive such a permit so this does seem rather unusual and the permits have been much abused as they don’t have to have a registration number on them.

“Local residents would not want any more of such permits to be allocated to the college.”

A new car park is proposed on part of the playing field to the west of the site.

The new block is a digital and creative media building providing more classrooms and a performance space.

In its supporting letter, HNW Architects pointed out that the college had 2,800 students and a shortage of space at four square metres per student.

According to the architects, the new building is not designed to help the college boost numbers or result in increased traffic. 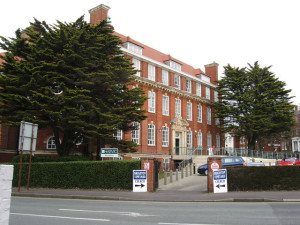 Currently 2,423 students either come by bus or train or walk to college.

Its supporting letter said: “The proposals do not look to adversely increase student or staff numbers so would have negligible impact on student, vehicle and visitor trips to the site.

“The proposals are designed to be in keeping with the existing aesthetic and character of this key location, including both the contemporary Copper Building and the locally listed main building facades.”

She said: “BHASVIC is an excellent sixth form college and very popular.
They need more space for specialist facilities.

“The recent extension facing Dyke Road is of a good design and fits well in the street scene.

“This proposed building is of a similar design so again should not detract from the street scene.”

A report to councillors recommends that they approve the plans.