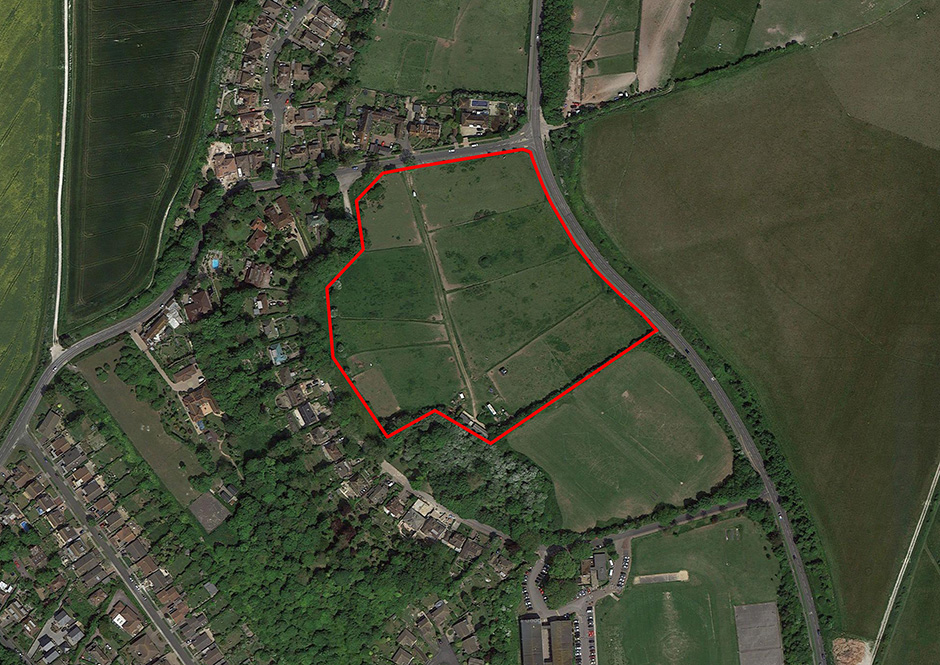 A new housing estate will be built on an Ovingdean meadow after an inspector said the need for more housing outweighed any ecological harm – opening the door to more such developments on the city’s urban fringes.

Campaigners battled for months against Lightwood Strategic’s plans for homes on the paddock south of Ovingdean Road, arguing that it would damage ecology, close the gap between Ovingdean and Rottingdean and spoil the character of the surrounding area and extra traffic would worsen air quality.

Two planning applications were turned down by the city council’s planning committee. The first for 85 homes was also dismissed on appeal, but the planning inspector said a smaller development would be acceptable.

Now a revised application, for 45 homes, has been allowed by planning inspector Lesley Coffee – after the city council dropped some of its objections on legal advice in a closed door meeting.

Chair of the planning committee Councillor Julie Cattell said: “I think this decision makes it clear that the planning inspectorate expects a certain amount of controlled development to happen on our urban fringes.

“I fully understand that feelings run high about developments on our urban fringe, and I’m sorry for any residents who feel badly affected by this.

“There is massive housing need locally and nationally. With this in mind we have identified a number of sites where appropriate development might be acceptable.

“This is one of those sites. Identifying these sites will help protect other sites where we believe development is not acceptable.

“We scored a major victory at this site in March 2016 when we successfully rejected a plan for 85 dwellings.

“At that time the Planning Inspectorate agreed with our refusal, but made it clear that in their eyes a smaller development at the site might be acceptable.

“In rejecting an application for costs against us the Planning Inspectorate has made it clear that it considers the actions we have taken in relation to this application to have been reasonable.”

Other sites identified by the council included in the draft of the second part of the city plan are:

In her report, Ms Coffey said that the council had decided to drop its objections over air quality and closing the gap between Ovingdean and Rottingdean, so she was concentrating only on ecology and its effect on the character of the local area and the setting of the South Downs National Park.

The Downs Preservation Group argued that the site was home to endangered species including the Red Star Thistle and Hornet Robberfly.

However, the developer said it would transpose thistles to areas where horses would continue to graze and collect and sow seeds – and several surveys have failed to find any significant populations of robberflies.

And the inspector said that there would be no great adverse effect on local populations of bats, badgers, slow worms, birds and lizards.

She did consider that there would be a reduction in species-rich grassland, giving “some limited harm” to ecology.

The developer argued that the council had a bad track record of delivering new homes, but the inspector said while not as much building had happened as the city plan required, the shortfall was down to poor market conditions.

However, she said that the council is unable to demonstrate there will be enough land to build these news homes on over the next five years.

But the inspector said that the city’s overall need for housing outweighed this. She said: “There is a considerable need for housing within Brighton and Hove as a whole …  this is a very significant shortfall which has important implications for the social dimension of sustainable development.

“She also noted that the city is subject to significant constraints in finding land for new development. In these circumstances, whilst the need for additional housing within Rottingdean may not be as great as elsewhere in Brighton and Hove, there remains a considerable unmet need for housing overall, and the appeal proposal would make an important contribution towards this need.”

She added: “Having regard to the limited harm to biodiversity and ecology, and the considerable benefits of additional housing within an area where the supply of housing land is constrained, I find that the benefits of the proposal would comply with the development plan considered as a whole.”