Beer and spirits were found for sale at an oriental grocers shop in Brighton which is only just applying for a drinks licence.

A Brighton and Hove City Council licensing panel heard how – after a spot check on Tuesday 16 January – trading standards officers sent a warning letter to the owner of Yun Feng Oriental Food Store in London Road, Brighton, having found spirits, beer, and lychee and rice wine on sale.

During a follow-up check on Friday 19 January, officers found alcohol still on sale and explained to the person working there that a personal licence was not enough for premises.

They carried out a third spot check on Wednesday 24 January and found cooking wine still on sale. Officers told shop workers to take it off the shelves.

These previous issues and a lack of information on the licensing application rang alarm bells for the panel today (Friday 13 July) as it was not clear if the company just wanted to sell cooking wine.

A key section of the licence application form was left blank.

The applicant gave no information about how the shop’s staff would meet the council’s “licensing objectives”.

Applicants are expected to explain how they would sell alcohol in a way that would be consistent with the prevention of crime and disorder, protecting public safety, preventing public nuisance and protecting children from harm.

The shops is in a part of Brighton and Hove designated a “special stress area” where there are concerns about crime, disorder and public nuisance.

Sussex Police licensing officer Mark Thorogood said: “The problem is the lack of information. It is not clear what they want to do, especially as they were found selling beers and spirits without a licence.

“If they said they do not want to sell beers and spirits but want to sell rice wine and things for cooking, we could look. But there is a lack of information prior to applying.”

The owner 49-year-old Guocheng Zhang, known as John, was not at the meeting. He contacted the council on Tuesday (10 July) to say that he was stuck in China because of Typhoon Maria.

Council licensing officers said that they had asked for a statement from him but received nothing. 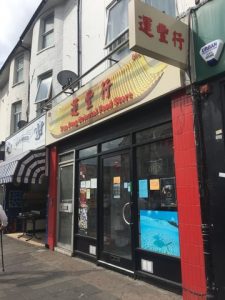 Councillor Lynda Hyde, who chaired the panel, said: “I am concerned to note the police concerns that the premises have been selling alcohol without a licence.”

She added: “Having heard the summing up, I as chairman am extremely concerned about this application.

“When asked to describe the steps they would take to meet the four licensing objectives, that form is left blank. They have not offered any form of objectives.”

After the public session at Hove Town Hall, the panel continued to discuss the application in private and will inform Mr Zhang and all interested parties of their decision by post.