Six blocks of flats up to eight storeys high have been approved for the site of the old American Express “wedding cake” building in Edward Street, Brighton.

The developer First Base was granted permission to build 168 flats as well as offices, shops and cafés on the site despite 96 letters of objection.

The scheme could host up to 2,000 jobs, councillors were told this afternoon (Wednesday 18 July), and it would include 33 affordable homes.

In addition, the developer would pay almost £1 million towards a number of other local schemes.

Eight members of Brighton and Hove City Council voted in favour of the scheme and four councillors voted against it after a two-and-a-half-hour debate at Hove Town Hall.

Derek Peacock, who lives in neighbouring White Street, spoke on behalf of objectors.

He told the council’s Planning Committee that they did not oppose development in principle but felt that something better should be offered.

Mr Peacock, whose home would be overshadowed by the development, spoke of the “unnecessary” reinstatement of Mighell Street, which would be extended to reach Edward Street, creating a wind tunnel.

His neighbour Adrian Hart spoke about confusion over the deadline for comments, with echoes of the complaints about a Hove Library scheme.

Mr Hart said that residents felt insulted and he referred to a detailed booklet, setting out objections, produced by a residents’ group.

The booklet made reference to First Base, saying that the company claimed to have attended “fairs, events, sports days and dance festivals” as well as attending a charity Sunday roast in April. 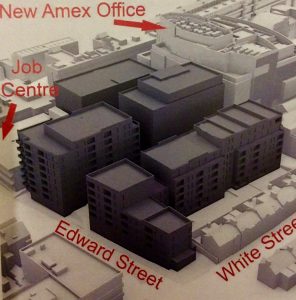 The community booklet said that neighbours were not invited to the roast, which was attended by former mayor Mo Marsh, and that people living in the area felt that they were “treated with contempt”.

Comments of support appeared on the council’s website after an event at Brighton University.

But the residents’ booklet claimed that students had been given iPads to write answer questions and their answers were used inappropriately – an allegation denied by First Base.

A total of 18 comments were later removed from the council’s planning website.

But references to supportive comments from them still appeared in a report to the Planning Committee.

During the debate Green councillor Phélim Mac Cafferty said that the poor consultation with the community swayed his vote against the scheme. 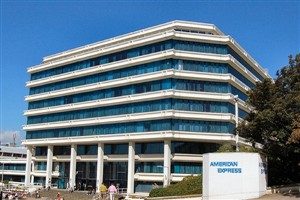 The old Amex HQ in Brighton

Speaking for the developer, Phil Wade said that First Base had carried out extensive consultation, with four consultation events and three drop ins.

He told the committee: “Any suggestion we have not consulted is simply not true.

“We have carried out extensive consultation with the council and stakeholders.”

The new building would be mainly brick with ceramic tiling and bronze anodised medal balconies. Some of the commercial buildings would have anodised bronze fascias.

the flats will be in six blocks up to eight storeys high with 54 parking spaces, 379 cycle spaces, 110 visitor cycle spaces, landscaping and recreational areas.

The scheme was described as a key potential site for businesses that have outgrown their current premises.

The amount of office space and other commercial areas could provide a base for up to 2,000 jobs. 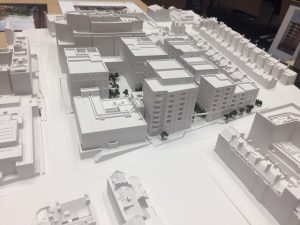 Green councillor Leo Littman asked why there was a limited amount of affordable housing as the council required 40 per cent.

This was the biggest speculative office development since City Park in Hove, now home to Legal and Heneral.

He said that the capacity for jobs was crucial, so the council had agreed to a lower level of affordable housing.

Labour councillor Nancy Platts was also concerned about the drop from 40 per cent affordable housing to 20 per cent.

She said: “I am not really convinced by the 20 per cent figure. We have a desperate need for housing in the city.”

“This just gives those who are already able to afford a property a discount.”

Conservative councillor Lynda Hyde asked whether enough parking was being provided, and said that the lack of parking at City Park, in Hove, had been a catastrophe.

Noting how widespread parking problems were, she said: “People drive in and park on the A259, in Rottingdean and Saltdean.

“The more restricted parking we have, the more unofficial park and ride areas there are.”

Independent councillor Michael Inkpin-Leissner said that the nearby Holy Trinity Church would lose the car park that it currently leases to American Express workers, resulting in a loss of 40 spaces.

Both the committee was told that the amount of parking was acceptable and should not adversely affect the area.

Councillor Inkpin-Leissner said: “There are other blocks of flats and I know how difficult the parking is.

“The church community is growing fast and there is not enough parking.”

The housing development would be car-free, councillors were told, with residents unable to apply for parking permits.

“They’ve had to suffer the new Amex building. The impact on this area is going to be huge.”

Labour councillor Julie Cattell, who chairs the Planning Committee, said: “There are up to 2,000 jobs on this site.

“Yes, I would love to have affordable housing but this is an employment site, using a brownfield site to its full capacity.”

The developer is required to make various financial contributions before Wednesday 7 November.