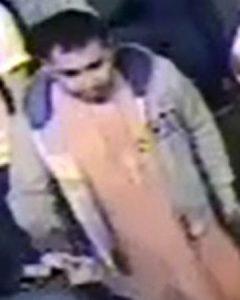 The force issued an appeal for help finding the man, who was filmed in the Black Lion pub in Brighton.

Sussex Police said: “Police are keen to trace a man who was seen committing an indecent act in a pub in Brighton.

“Shortly after midnight on (Friday) 15 June a man was seen touching his crotch area and then committing a lewd act.

“He was standing very close to some women who were on the dance floor in the Black Lion pub.

“Police are keen to trace the man in the CCTV (image) who they believe to be the suspect.

“He is described as of Arabic appearance, average height, larger build, in his twenties or thirties and wearing what appears to be a thawb, white trousers and a beige hooded top.

“Anyone who recognises him is asked to contact police online quoting 1526 of 21/06.”