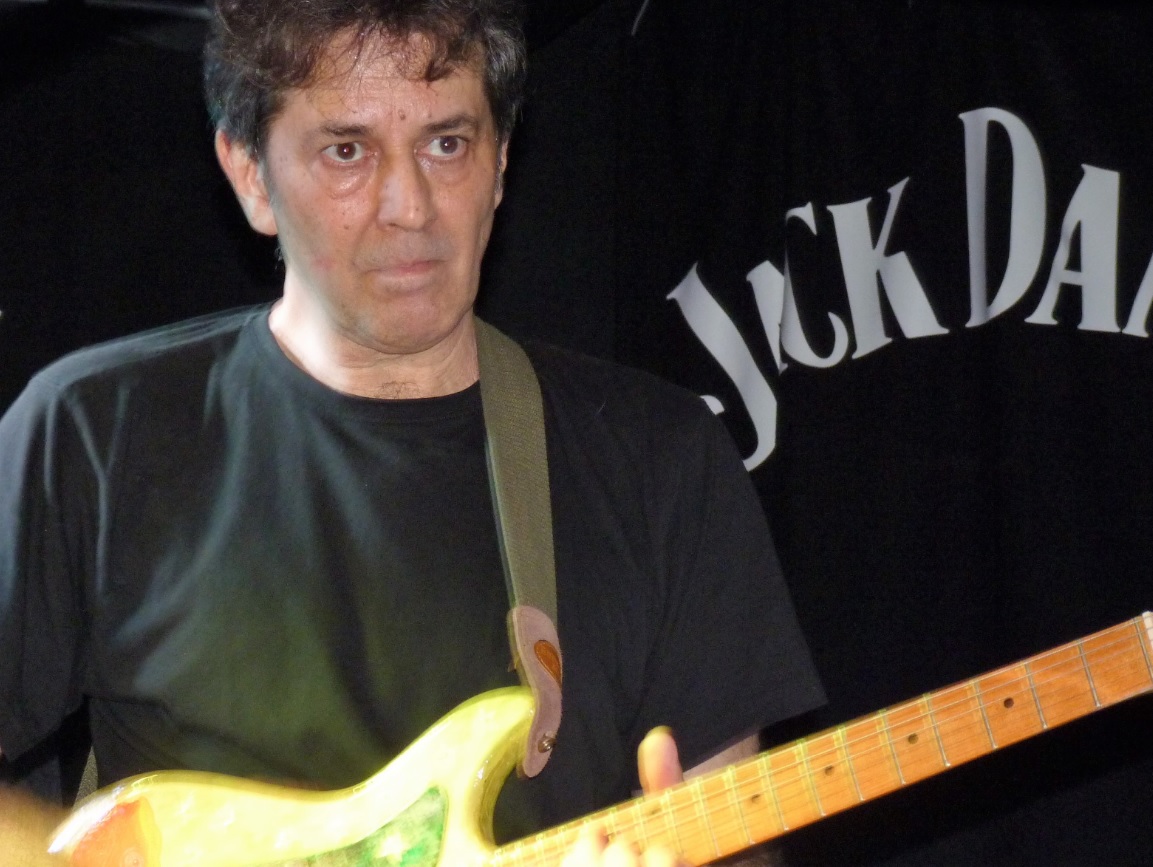 If you are a fan of live music then Brighton is the place to be. It seems as though there is a band living on every street within the city. It’s so vibrant here, that you simply can’t fail to get away from it all.

Occasionally and now ever increasingly, you get several clashes of gigs within the city. Two or more bands that you wish to see play live have selected the same day to perform their latest sets. Tonight was one of those examples, however the venues were within running distance although something had to give. I worked out the best plan of action and so I witnessed three young up and coming bands at the Green Door Store beforehand (Read the review HERE) and then literally legged it to the Hope & Ruin on Queens Road to catch the start of the sell-out 40th anniversary gig from The Monochrome Set. Sadly I had missed sets from The Bitter Springs and Pog. So in fairness, I have added some info about those acts at the foot of this article. 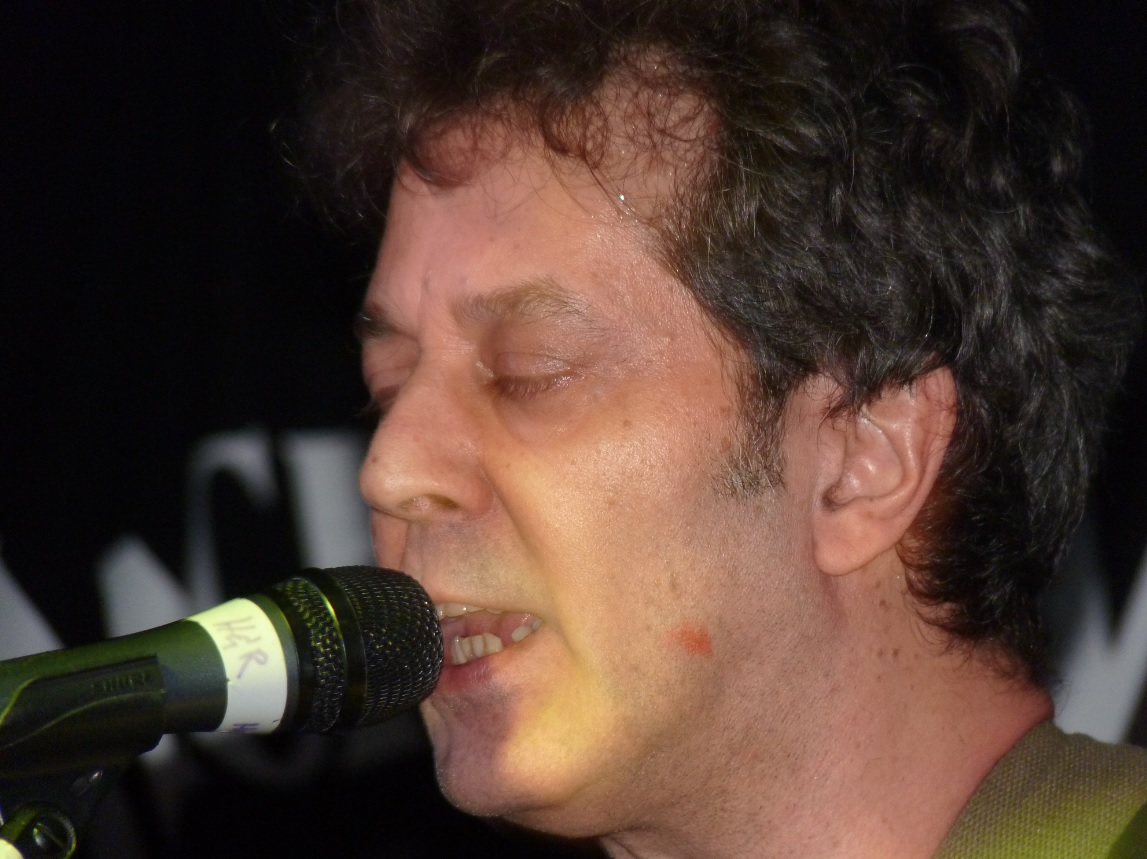 The Monochrome Set returned to Brighton as part of their year long celebration of “40 years Of Aural Pleasure”, featuring original band members Indian born Ganesh Seshadri AKA ‘Bid’ (guitar/vocals), and former Adam & The Ants member Andy Warren (bass) with John Paul Moran (keyboards) and Mike Urban, who was previously in the band in the early 90s, on drums. 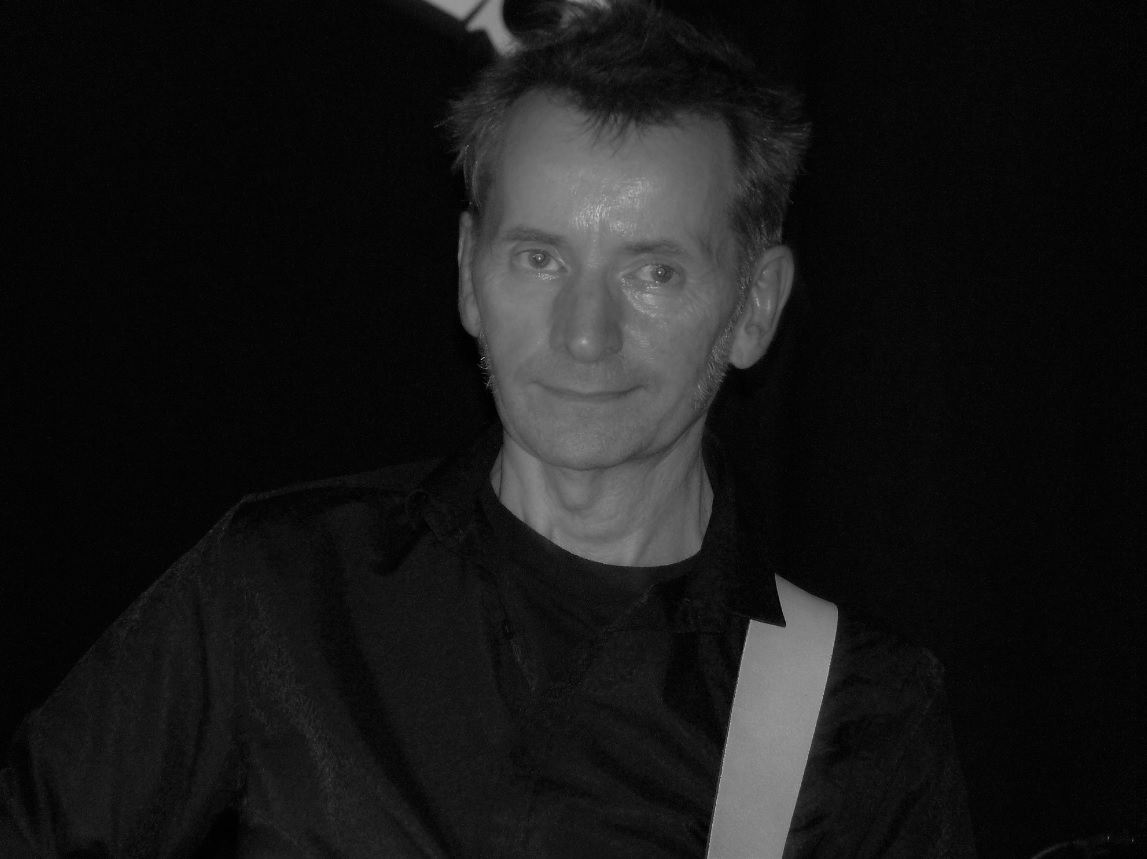 Andy Warren had featured on the earliest Adam & The Ants releases, which included debut single ‘Young Parisians’ (October 1978), follow up ‘Zerox’ (July 1979) and debut album ‘Dirk Wears White Sox’ (October 1979). There is an interesting Adam & The Ants connection as The Monochrome Set came about as a result of the remnants of a college group called The B-Sides, whose members had included Stuart Leslie Goddard, later known as Adam Ant. 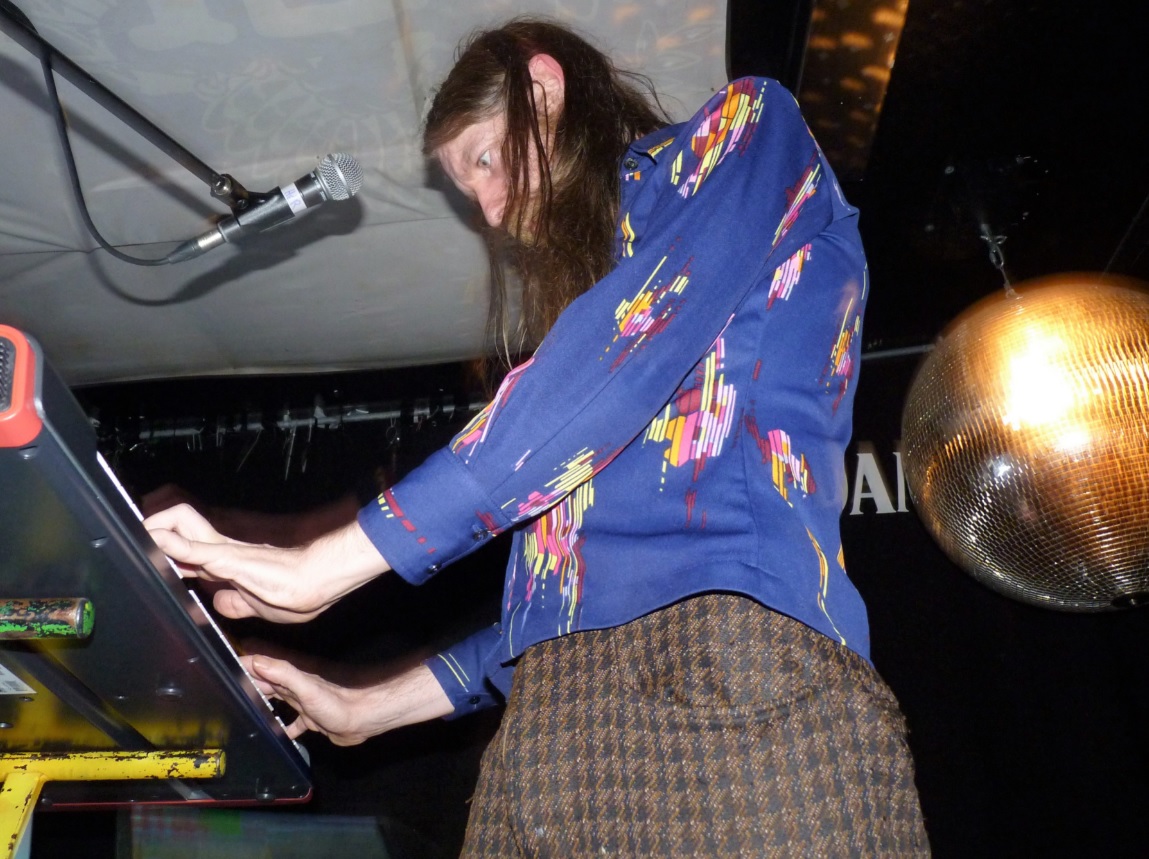 The Monochrome Set formed in Hornsey, London in 1978, and were heavily influential in the ‘post-punk’ scene that evolved after the initial scorched earth of punk. Their debut live gig was on 15th February 1978, at Westfield College in London. They then went on to record three John Peel Sessions 14.2.1979, 21.8.1979 and 15.4.80. 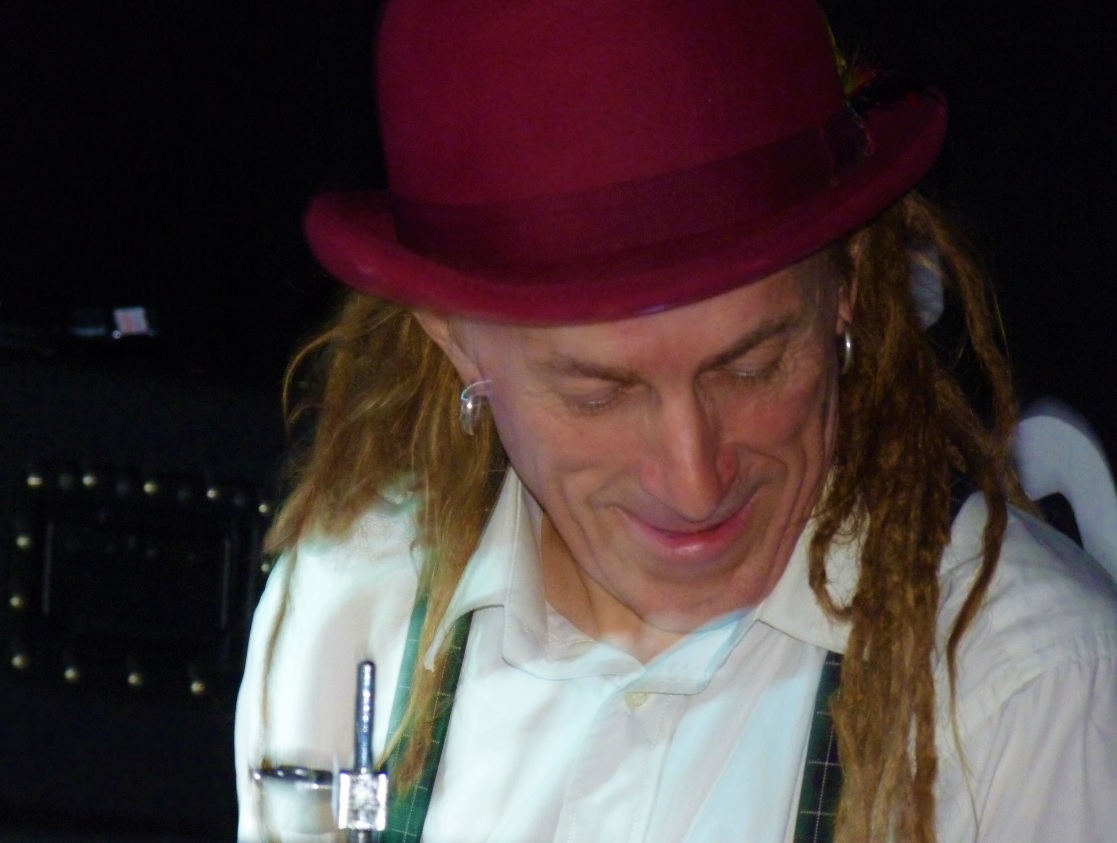 Their first album was titled ‘Strange Boutique’ and came out at the same time as their third John Peel Session in April 1980 on the Dindisc label, which was the home of Orchestral Manoeuvres In The Dark, The Revillos and Martha & The Muffins. ‘Strange Boutique’ only peaked at No.62 in the official album charts and yet here we are 40 years on and the band have sold out the Hope & Ruin. This is a sure sign of the bands lasting influence on modern music. 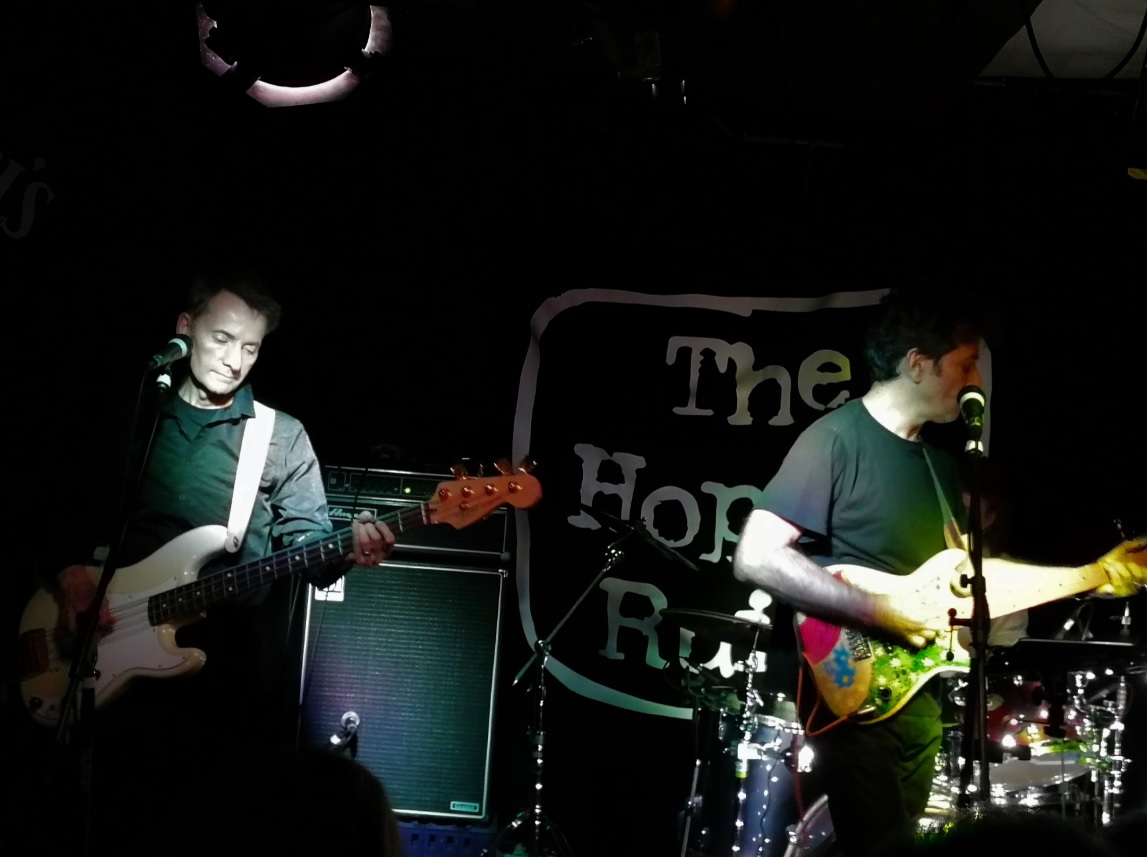 Though The Monochrome Set split in 1985, the next decade saw several reunions for both live gigs and further studio recordings, with their album release count now being well into double figures. They got it together for a 30th anniversary reunion gig in 2008 and then reconvened in 2010 and have since toured all over the UK, Europe, Japan and the USA, whilst also releasing five new, critically acclaimed, studio albums, the most recent, ‘Maisieworld’, on the German ‘Tapete’ label in February this year. A box set entitled ‘The Monochrome Set 1979–1985: Complete Recordings’, containing six albums, has also been released this year. 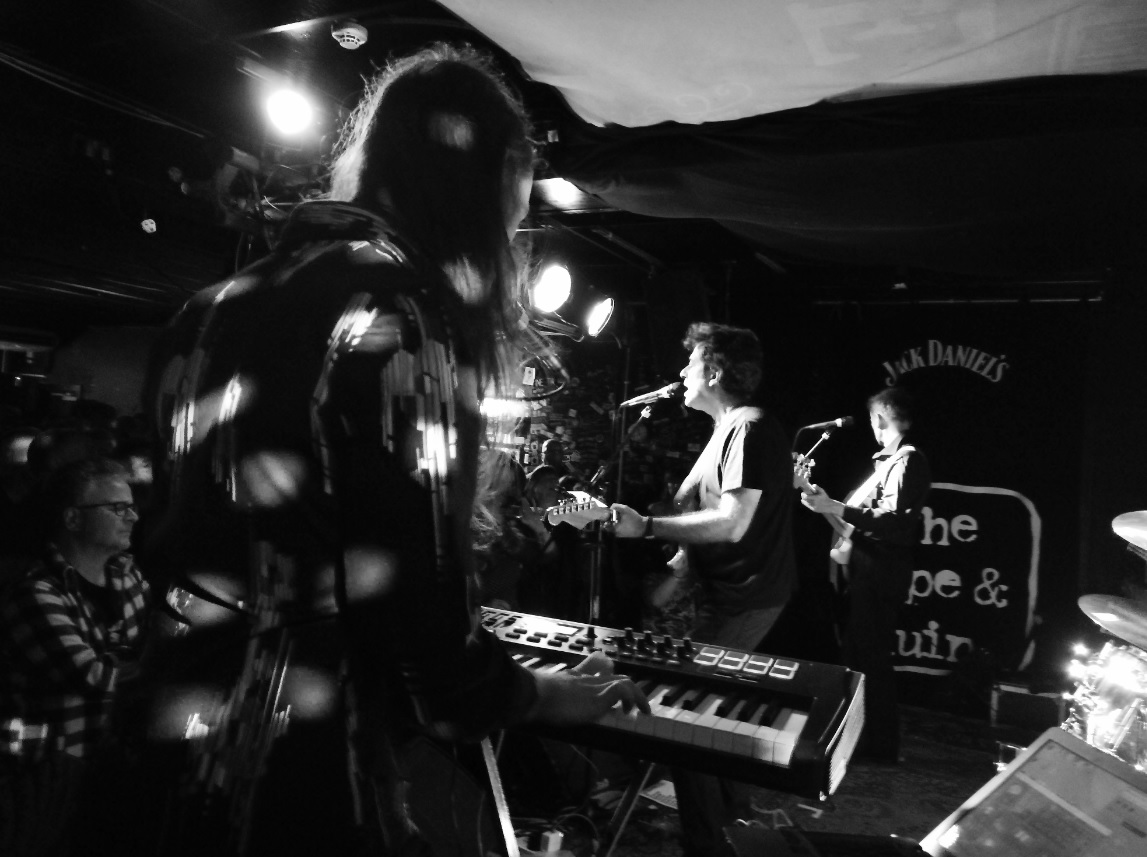 I was the last person to squeeze into the gig venue upstairs at the Hope & Ruin tonight. It was an adventure as it was rammed with mature concert goers, but thankfully I was able to secure my slot in order to obtain a few shots of the night. 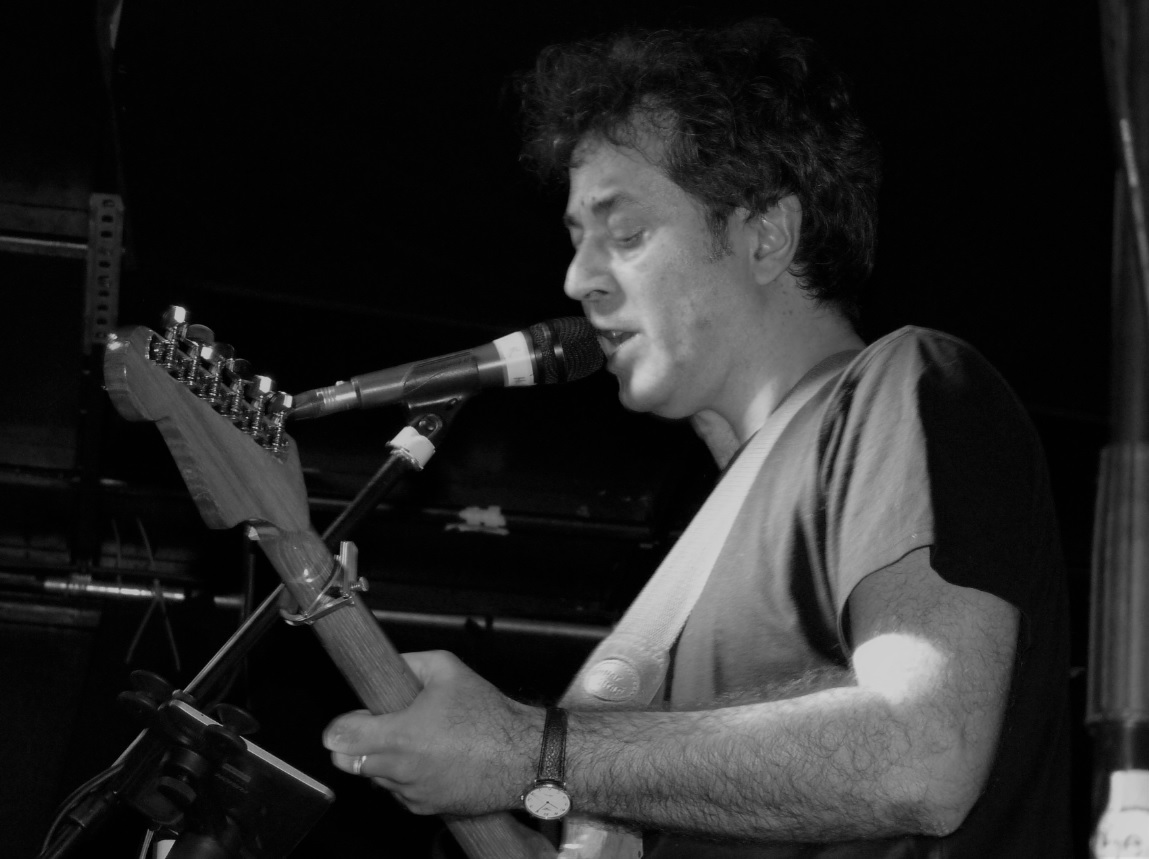 The band had planned to perform 17 tracks tonight, but literally went to the wire regarding the 11pm curfew and I think they might have even played 18, during their estimated 80 minute set. The setlist for the show can be seen below. 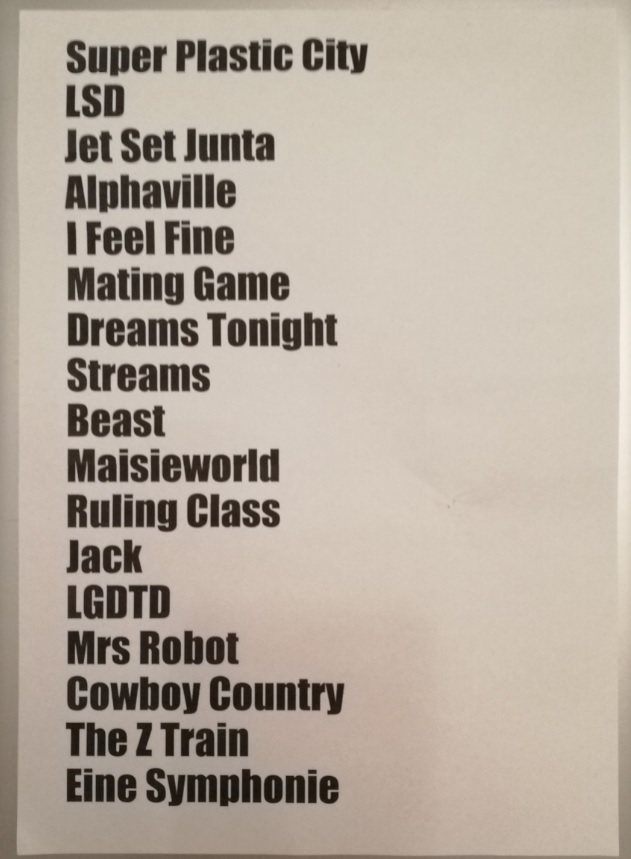 Visually the band look like real characters, with the hippy-like slender long haired, bearded keyboardist John Paul Moran limbering up with one-legged yoga positions in between some of the tracks. I certainly couldn’t have done that, so he must be rather agile. Drummer Mike Urban was sporting that Levellers look with his braces and long thin ginger dreadlocks flowing out from underneath a claret coloured bowler hat, he certainly looked the part. 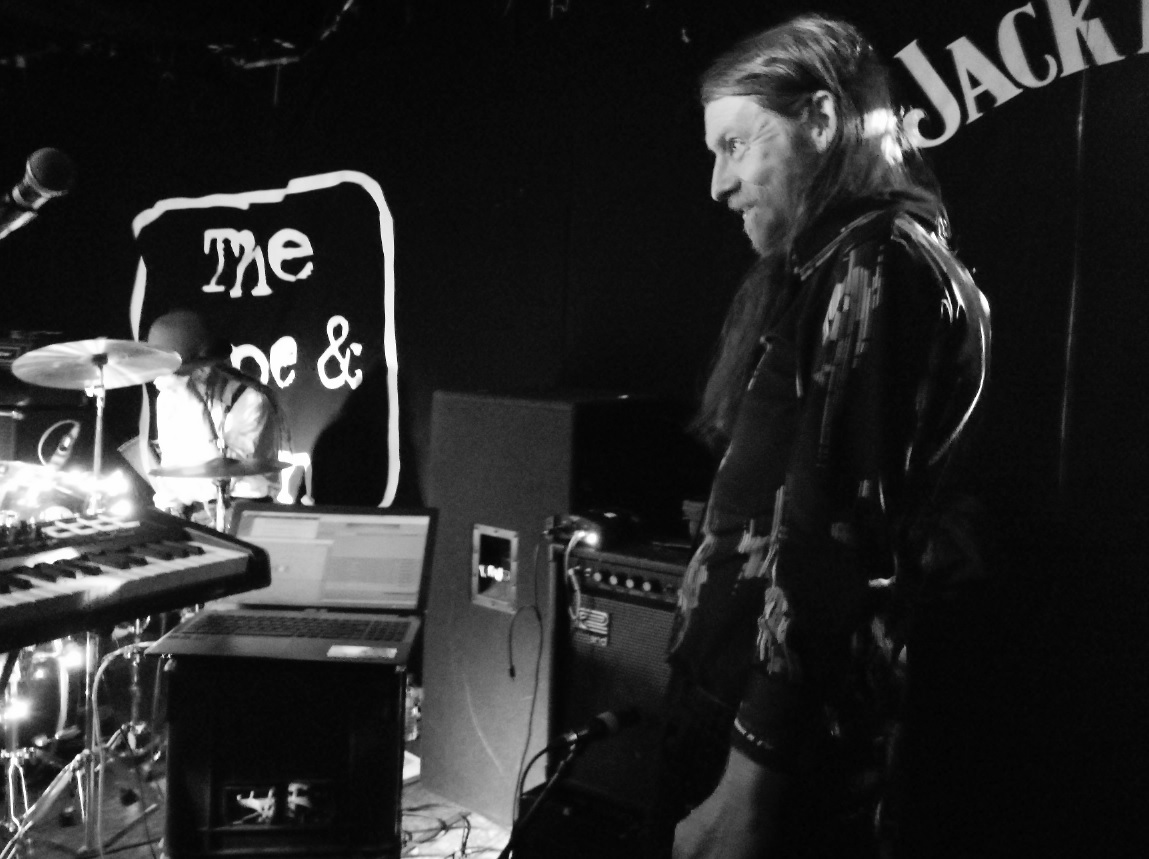 Meanwhile, former Antman, Andy Warren on bass was just getting on with it and letting amiable singer ‘Bid’ do all the talking, in between tunes and accompanied by his bottle of water and refined red wine. ‘Bid’ has a slightly distinctive warbling vocal style that sets the band apart from other contemporaries. At times, this vocal style was even wandering into Chas & Dave territory, maybe it’s a London thing? 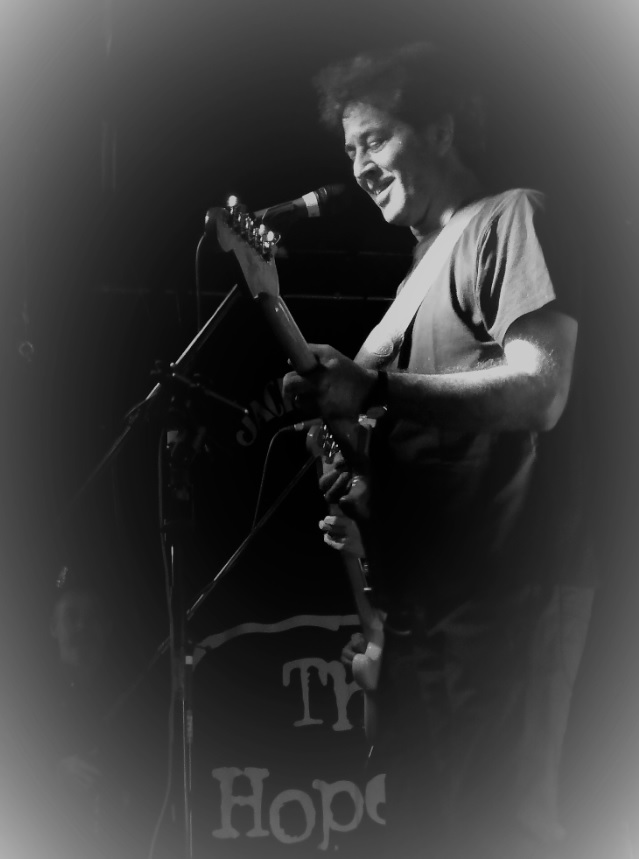 So there it was, another old John Peel fave band crossed off of my gigs list. I’m glad that I went and so it appears was everybody else. On leaving the venue, I was listening to other folk who were saying that they had also been to several other gigs recently by the band, so folk travel far and wide to see this lot!

More on The Monochrome Set HERE and HERE

Also on the bill tonight were The Bitter Springs and Pog. Info on them is found below:

The Bitter Springs (who’s current line-up are Simon Rivers on vocals and guitar, Andy Deevey on bass, Paul McGrath on drums, Vic Godard on keyboards (yes really – THE Vic Godard!), Phil Martin on violin and Nick Brown on guitar) are an English rock group from the London suburb of Teddington. The band evolved from Last Party, who had formed in 1985, with the name changing in 1996. The band have released two albums as Last Party, and six as The Bitter Springs and also played with Vic Godard as Subway Sect, on and off for nine years. Learn more HERE. 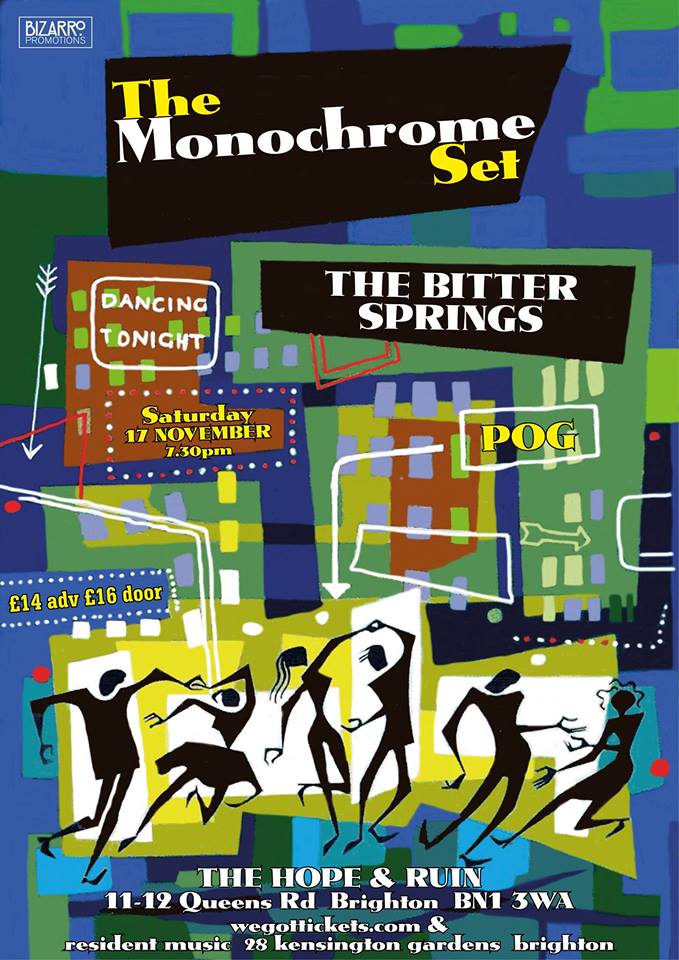 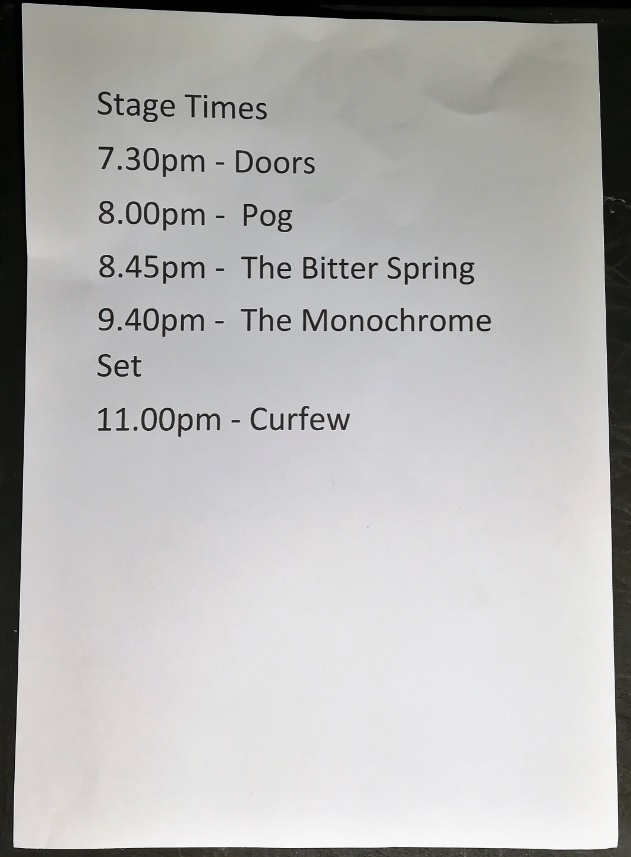