A man from Brighton who has become stranded at sea off the Italian coast has called on Foreign Secretary Jeremy Hunt to intervene. 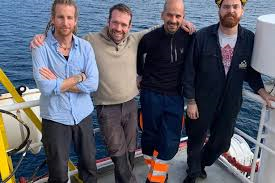 Kim Heaton-Heather, 37, head of mission on a vessel called Sea-Watch 3, three British colleagues and 47 migrants who they rescued from a storm in the Mediterranean Sea are stranded in Italian waters.

The British crew are reportedly under investigation for allegedly assisting illegal migration off the coast of Sicily.

The Sea-Watch crew rescued 47 men and boys, with the migrants’ inflatable boat losing air. They were allowed to shelter from the storms offshore from the historic Sicilian city of Syracuse.

But they said that they were not allowed to leave their boat or local waters while the investigation was under way after the Italian interior minister Matteo Salvini intervened.

The minister has refused to allow private rescue boats to enter Italian ports. He said that to do so would encourage human traffickers on the Mediterranean.

He accused the Sea-Watch captain and crew of “a crime and a clear desire to use these immigrants in a political battle”.

The crew of the humanitarian aid vessel said that they had rescued the migrants, including 15 unaccompanied children, on Sunday 19 January after they were spotted off Libya.

Sea-Watch 3 said that the vessel was not granted permission to land by the Malta authorities but last Friday the Italian coastguard said that they could shelter from a storm in its waters.

Mr Heaton-Heather said: “If he had seen people lying upside down in the water outside the ship, if he had heard people talk about torture and seeing family members killed and heard stories about all the people drowning, I don’t think any human being could turn their back on this situation.

“Jeremy Hunt and every other politician that can in some way affect this situation has a moral responsibility to give their intervention and help us.”

The situation on board had become dire, with two of the three portable toilets full up and provisions running low, the crew said.

Three United Nations agencies are reported to have urged Italy to allow the migrants off the ship.

Support has been forthcoming from some Sicilians – and the mayors of Palermo and Naples have offered their ports. But the decision rests with the national government rather than the local authorities.

The European Court of Human Rights told Italy to provide food, water and medical care to the vessel, while the Foreign Office said that it was seeking further information about the British crew and monitoring the situation.