Neighbours fear that problems with noise and anti-social behaviour will worsen if a “party house” in Brighton is converted into two standalone properties for hen weekends.

They will learn this week whether a planning application will be granted to add an extra floor to the property at 9 Hampton Street, on the corner of Spring Street.

The application, which has the backing of planning officials, also seeks permission to sub-divide the property which is in the Montpelier and Clifton Hill Conservation Area.

The Montpelier and Clifton Hill Association was among the objectors to write to Brighton and Hove City Council to oppose the planning applicaiton.

The plans are due to be discussed by the council’s Planning Committee on Wednesday (6 February).

If approved, the northern half of the building will have an extra floor so that it becomes a three-storey house with three bedrooms, facing Spring Street.

The southern half of the building, in Hampton Street, will have one bedroom and remain two storeys high.

Eight neighbours have submitted written objections to the scheme, citing the proposed height, extra traffic and the impact on the conservation area.

They are also concerned about more noise, saying that the current house was rented out to hen parties.

They said: “Two probable ‘party houses’ not one with noise and disturbance from inside and outside the house (hen party visitors smoking/chatting on street late at night) is inappropriate in residential area with primary school.”

Another objector said: “As the intention is to increase the number of ‘party’ visitors this dwelling can accommodate, it will lead to further noise, street pollution and disruption in what is a quiet residential area. Therefore I feel I must object to this planning application.” 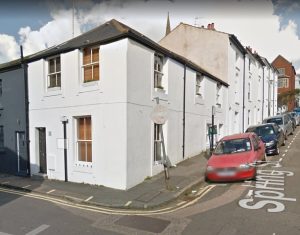 Increased traffic was also cited as a concern, with a school so close, in addition to the parking pressure from being a city centre location.

A neighbour wrote: “There is currently enormous pressure on parking (with an average eight to ten-month wait for a zone Z residents parking permit) and the creation of an additional dwelling will place further pressure on already-restricted residential amenities, including an increase in traffic.

“As we live with a primary school located in Spring Street (with the rear services exit/entrance in Hampton Street) an additional dwelling will invariably mean additional traffic.”

The Montpelier and Clifton Hill Association was concerned about conserving the view.

The association said: “The proposed additional storey, although reduced in size by these amended plans, would still compromise views of the grade II (listed) stone spire of St Mary Magdalen Church in Upper North Street when viewed from the southern end of Spring Street.

“The integrity of the existing Georgian roof, with its 30 degree pitch, would be damaged and the proportions of the original building dramatically changed.”

However, developer Lara White said the properties would not be kept as party houses. She said: “To set the record straight. There was never any intention to create two hen party houses in securing planning for this development.

“We desperately would like to move away from renting this property as a group house (or applying and renting HMO ) as this is not our business model.

“We have developed quite a few properties in Brighton all very high end and exceeding the ceiling price for the streets they are in.

“In our plans we are taking a ‘problem house’ (whoever owns it ) and providing the street with two luxury developments which would enhance and set a new but sympathetic standard to the street.”

The Planning Committee is due to meet at Hove Town Hall on Wednesday (6 February). The meeting, which starts at 2pm, is open to the public.