Whitehawk gets a Community Fridge 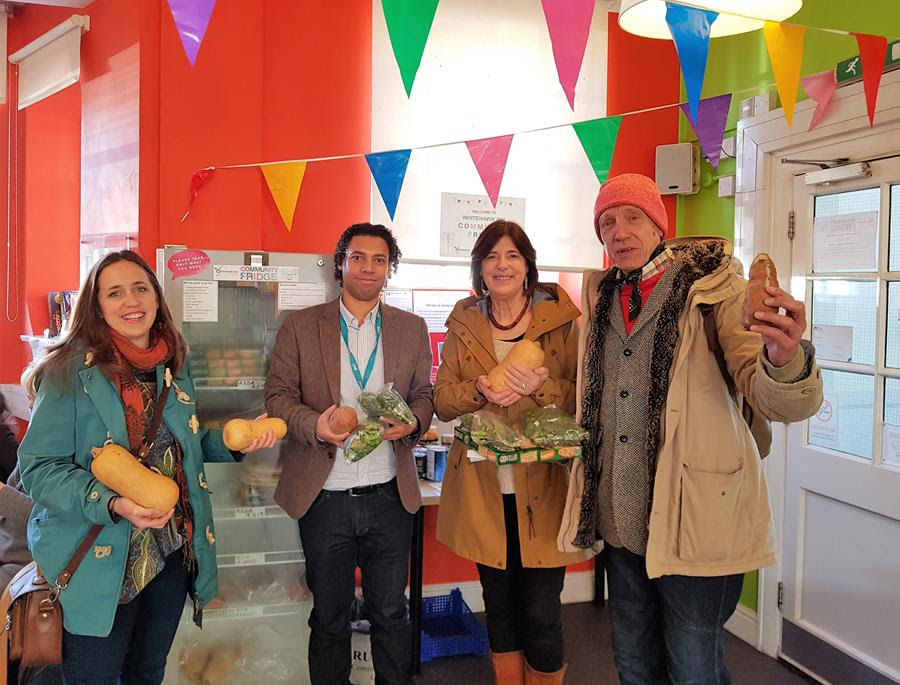 Above, from left to right, Helen Starr-Keddle of BHFP, Mirco Cordeiro of BHT, Brighton and Hove Deputy Leader of the Council and Chair of the Environment, Transport & Sustainability Committee Councillor Gill Mitchell, andNicolas de Conde
Picture by Sabrina Carter.

A fridge full of surplus food donated by local businesses free to anyone who can stop it going to waste has been installed in Whitehawk.

The fridge, the city’s second Community Fridge, can be found at the Whitehawk Inn in Whitehawk Road and it’s hoped it will be as much of a success as the first one at the Phoenix Community Centre in Phoenix Place, which has seen 1,000kg of food donated to it in nine months.

The fridges are the work of the Brighton and Hove Food Partnershiop. The partnership’s development officer Helen Starr-Keddle said: “Whitehawk Inn was chosen to be the second location for a Community Fridge because it has a great community network and it is positioned near to surrounding shops and businesses who might have surplus food.

“It is also one of the most deprived neighbourhoods in the city. Ideally, we would like to see Community Fridges in all areas in Brighton and Hove where there is an identified need.

“We are very excited to launch this second Community Fridge in Brighton. Food poverty and food waste are both huge problems and it is fantastic to see a positive solution to both issues. The first Community Fridge is going exceptionally well.”

Mirco Cordeiro, coordinator of the Community Fridge scheme at Brighton Housing Trust, which runs Whitehawk Inn, said: “Whitehawk Inn serves one of the most deprived communities in the country.

“The contrast with other areas in Brighton and Hove emphasises the need for a dual approach, one which will attempt to reduce food waste – a national problem that also affects our city – while also addressing food poverty. We are developing partnerships to ensure regular donations of surplus food.”

The Whitehawk fridge was launched on Tuesday 19 February, thanks to funding from Sainsbury’s Waste Less Save More campaign. Both fridges have been generously donated by Liebherr.

The new Whitehawk Inn Community Fridge is open Monday to Thursday 9am to 4pm and Friday 11am to 1pm. It can accept sealed packaged foods, cheeses, fresh fruit, fresh vegetables, table sauces, pastry, unopened milk and yoghurt, unopened fruit juices and salads, and eggs if they are in date.

Anyone can pick up food from the Whitehawk Inn or Phoenix Community Centre fridges for free. They are not policed and their operation is based on trust. People though are asked to be considerate and only take what they need.

Since opening, the Phoenix Community Centre fridge has received a further £800 of funding from Hyde Charitable Trust to help deliver more donations from FareShare, the UK’s largest charity fighting hunger and food waste, to it. Supermarket chain Aldi has also joined the growing list of those donating surplus food to the fridge.

In Brighton and Hove, 17 food banks distribute 358 parcels each week, yet 30,000 tonnes of food a year is wasted by businesses and households.