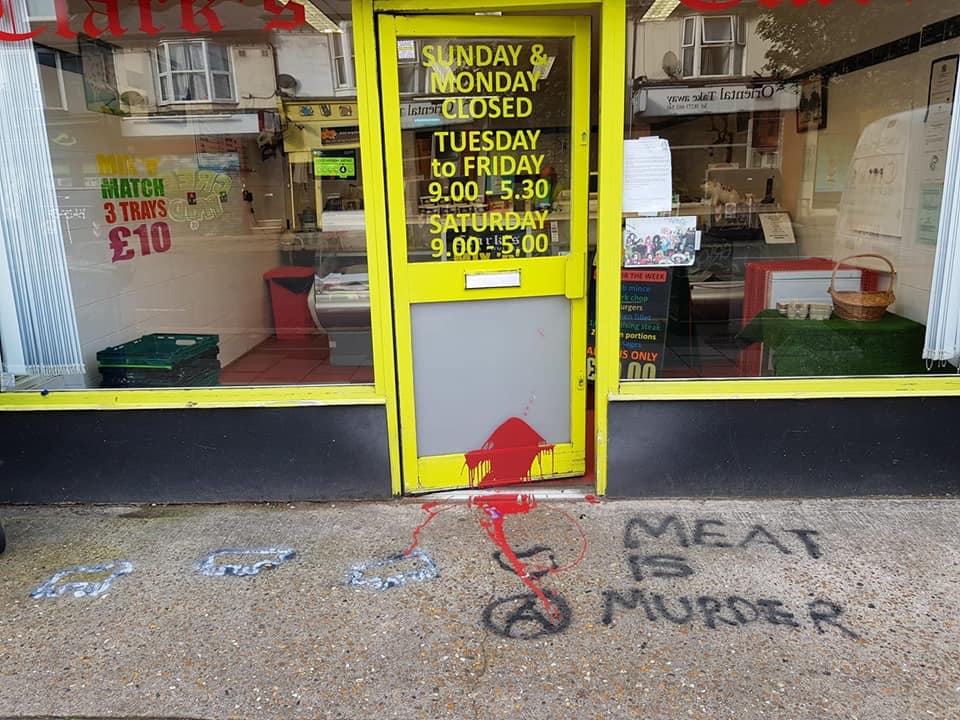 An independent Brighton butcher has been targeted by vegan vandals who threw red paint at his shop front and sprayed meat is murder on the pavement.

Paul Clark of Clarks’s Meat and Poultry on Lewes Road discovered the damage when he opened up at 6.30am today.

But the butcher has been overwhelmed with support from customers – including a homeless organisation he donates meat to which has urged its supporters to show their solidarity by buying a banger.

Mr Clark said: “They’re idiots aren’t they? I’m a small business, why do it to someone like me?

“If someone does this kind of thing, it means they’ve lost the argument. It’s just vandalism.

“I’ve managed to get the paint off myself with a lot of scrubbing, and I borrowed some anti graffiti cleaner from the funeral directors next door.

“It was being scrubbed off by the time people were turning up. A few parents on the school run saw it.

“I have had a huge response from customers and friends and people on the homeless network, all of support which is nice.”

Jim Deans, of Sussex Homeless Support, said: “I am fuming. Paul Clark  goes out of his way to help us. He constantly provides us with meat so we are able to feed the growing homeless numbers in the city.

“I see Paul virtually every day in his old van running round the city scraping a living which he just about manages.

“He clears his wardrobe out to give us clothing to put on the backs of Brighton’s rough sleepers.

“He visits our offices and buses regularly and never asks for any reward for what he does.

“To see this been done to little shop on Lewes Road is outrageous. All this group have done is create anger against them and possibly every happy law abiding vegan in society.

“Please drop into his shop and buy a few sausages – you can take them or leave them for us but please support him.

“This morning I was at Paul’s shop offering him support while giving him a chunk of the charities money to supply sausages for Sunday’s street kitchen.

“I hope today true vegans go into his shop say sorry for the vandal’s damage and buy us a few sausages.”

A police spokesman said: “Police are investigating the criminal damage of a butcher’s shop in Lewes Road, Brighton.

“Red paint was found to have been thrown over the front of the shop at 6.30am on Thursday (June 13) and black paint daubed on the ground.

“Anyone with information about the incident or who may have seen anything suspicious in the area overnight is asked to report online or call 101 quoting serial 256 of 13/06.”