Bin rounds are to be changed in the coming year after a rise in the number of missed rubbish collections.

The rate of missed rubbish and recycling collections jumped last year compared with the year before, according to a report to councillors.

A series of reviews and proposals for change at Brighton and Hove City Council’s rubbish, recycling and street cleaning division Cityclean come as the threat of a strike remains.

Almost nine out of ten Brighton and Hove binmen voted for strike action in June after a breakdown in relations between their union, the GMB, and the council’s senior leadership team.

The performance report – to the council’s Policy, Resources and Growth Committee – said: “There has been a significant increase in the number of missed collections.

“This includes difficulty in retaining and recruiting drivers, access issues to certain areas of the city due to increased density of parking in some areas where there are no controlled parking zones, fleet which is too large to access some streets (and) lack of management and operative capacity.

“In addition to this there has been a change to the way that data on missed collections is captured, having made it easier for residents to report when collections are missed. This provides a more accurate reflection of the service.

“Results show a continuing improvement following a spike in missed collections figures earlier in the year.

“The results for recycling are worse than refuse because missed refuse is prioritised over recycling due to the greater environmental risks of uncollected refuse.

“Plus, recycling trucks are larger than refuse trucks, meaning they suffer more from narrow access.

“The City Environment Modernisation Programme is developing a sustainable future for the service in the context of reducing council budgets, increases in customer demand and an expanding service offer.” 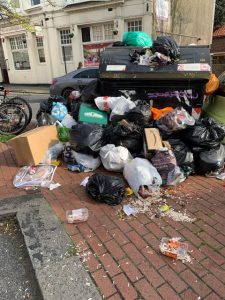 The amount reached 30.4 per cent from April to June last year – and the council hopes that the introduction of more wheelie bins will help the total towards the current 37.7 per cent target.

The proportion of streets inspected which were found to have widespread or heavy levels of litter was 3.2 per cent last year.

This was within the 4 per cent target set by the council and an improvement on 2017-18.

The performance report is due to be presented to the council’s Policy, Resources and Growth Committee on Thursday (11 July) at Hove Town Hall. The meeting is scheduled to start at 4pm and should be open to the public.