The heavens open as Doves fly into Brighton 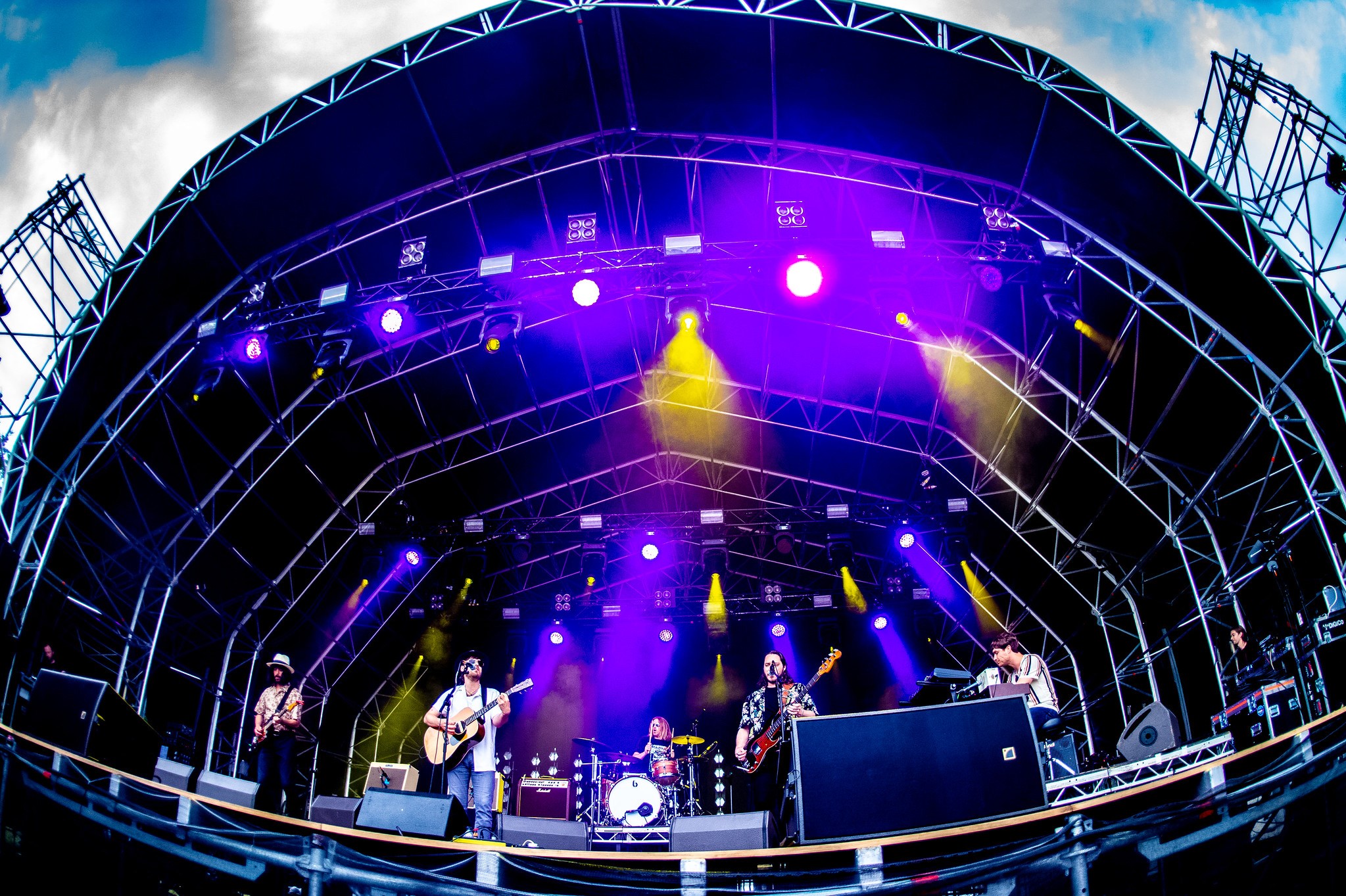 My first thought on arriving at Brighton’s lovely Racecourse, was with regards to ‘Brighton Rock’, the film (the original one, with Dickie Attenborough in it). I wonder what Graham Green would have thought, knowing that ‘Brighton’ would actually ‘Rock’ here tonight. I’m betting that Spicer, would have ‘gone all milky’ (watch the film!).
…And so, under leaden skies I took my place at the crowd barrier looking up at the stage. 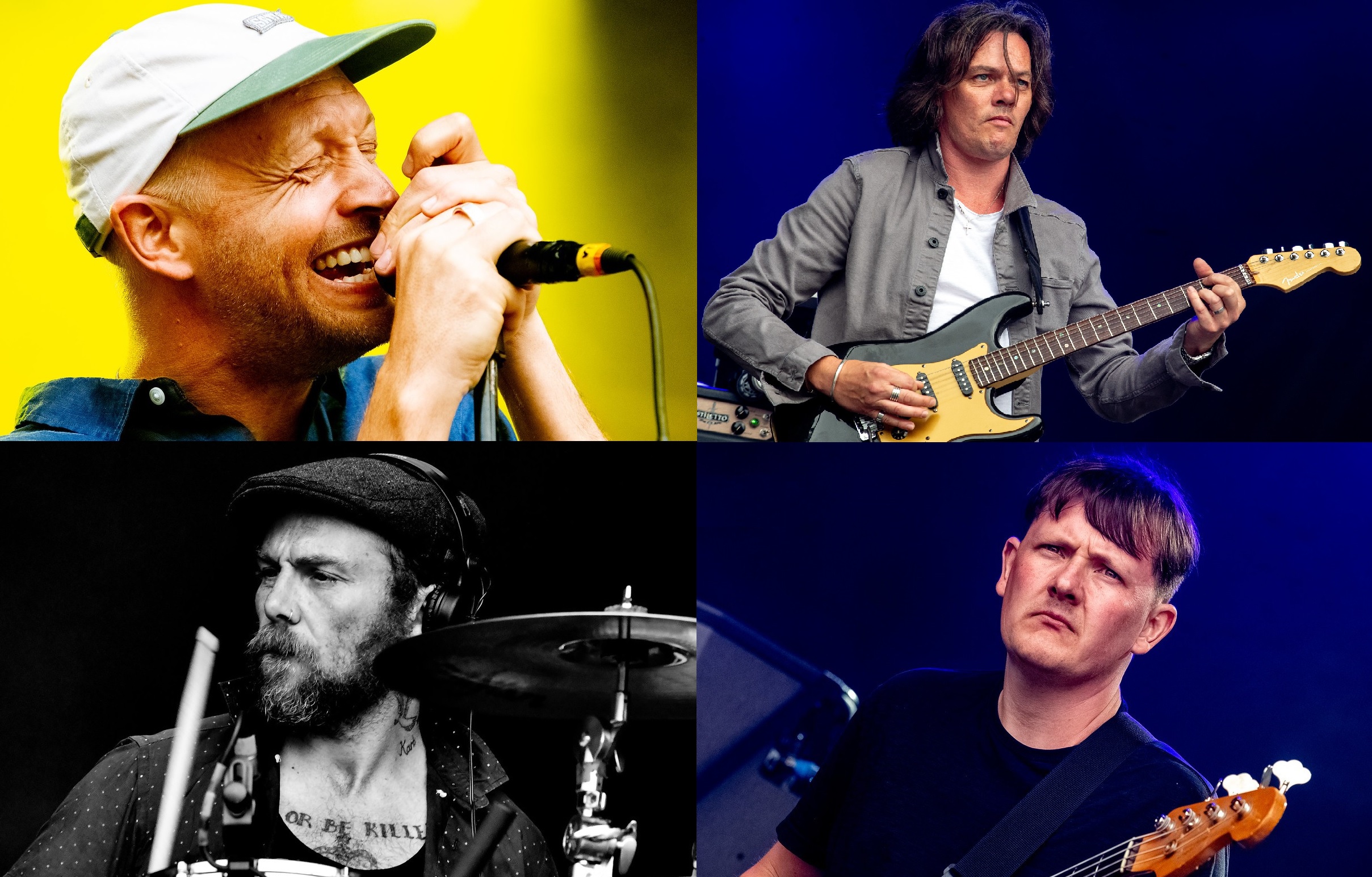 First up tonight are Birmingham’s very own The Twang. With their 6th studio album ‘If Confronted Just Go Mad’ set for release in November of this year, it’s great to see this band still making great tunes.

Formed in 2004, the bands unique style of indie rock really stands the test of time, and their new tunes prove that they still have something to say to the world! Lead singer Phil is a really natural frontman, a proper rock star, and if the rest of the band appeared a tad nervous, Phil had a solution – Vodka and Coke! In fact towards the end of the set he commented about ‘Masking fragility with potato vodka!’. It certainly seemed to do the trick, although the last song had to be started 3 times as Phil couldn’t remember the first words – luckily a helpful fan reminded him!

More info on The Twang can be found HERE. 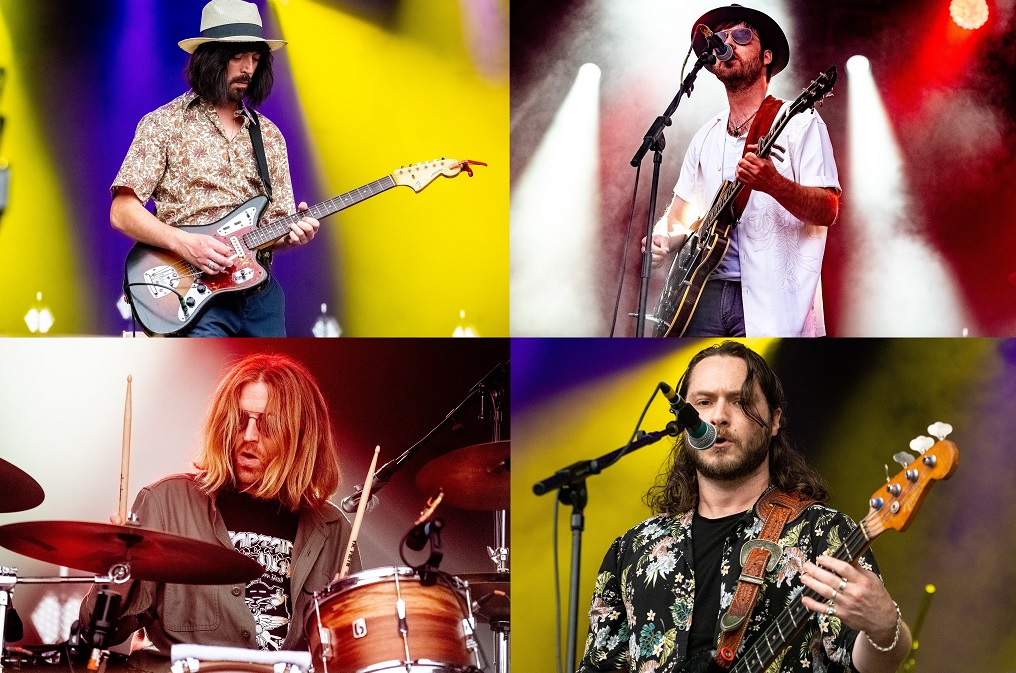 Next up on stage were The Coral who formed back in 1996 and finally released their debut self-titled album in 2002. Since then, they have released a further eight albums, with the latest offering being ‘Move Through The Dawn’ which came out last year.

I’m ashamed to say that I have never seen these Merseysiders perform live before. They don’t disappoint! Playing their blend of Indie-rock/Psychedelic/country folk creates a very interesting set. I could even hear shades of The Eagles in there somewhere, perhaps it was the harmonies? Anyway, my fave tune of theirs tonight was the epic live version of ‘Goodbye’, a huge roller-coaster of psychedelic sound – including an extract of Pink Floyds ‘set the controls for the heart of the sun’. Brilliant!!

More info on The Coral can be found HERE. 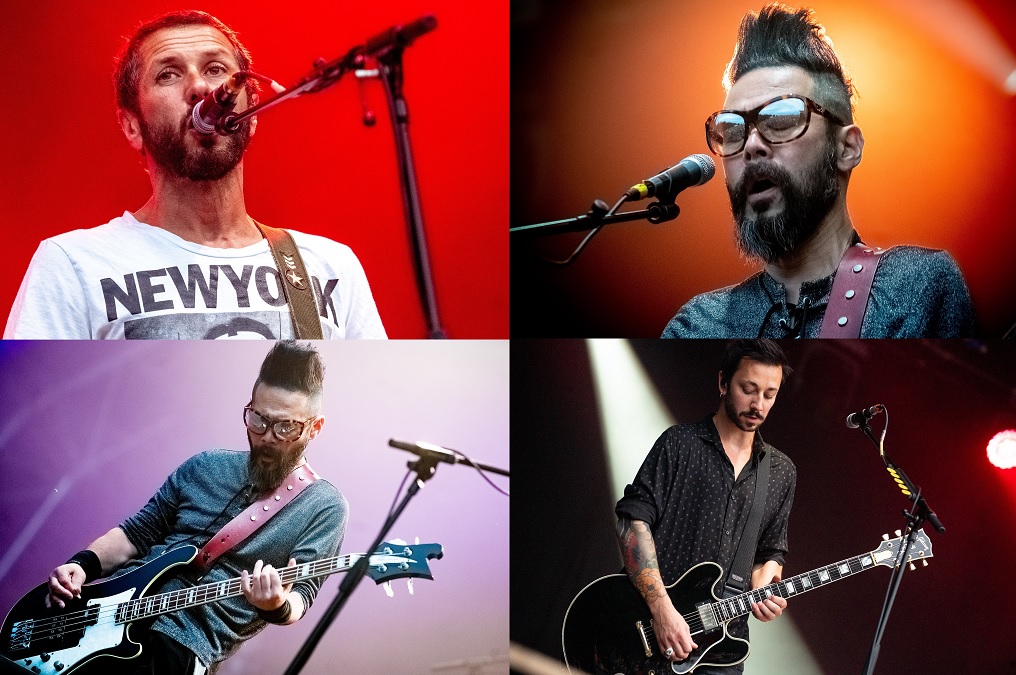 So, still dry, but under ever greying skies, the eagerly awaited Feeder bound on stage! Feeder, who? you say – C’mon – who doesn’t know the amazing ‘Buck Rogers’ single from 2001 – go on, listen to it HERE.

10 studio albums and counting, with their latest dozen track instalment entitled ‘Tallulah’ due to drop on 9th August. ‘Tallulah’ will be available on a range of formats: Standard CD; Deluxe CD bound in a book-pack; LP on Heavyweight White Vinyl; a Limited Deluxe Picture Disc LP and a Pink and White Cassettes versions. This week saw the guys bring ‘Daily Habit’ from the forthcoming album to the world – watch the new video HERE.

The band are certainly in the midst of a resurgence, having scored consecutive Top 10 albums with 2016’s ‘All Bright Electric’ and the 2017 ‘Best Of’. This is the first time I have seen these Welsh rockers live! They very quickly whipped the audience into a dancing mood, and to be honest the dancing didn’t stop until the band left the stage!

More info on Feeder can be found HERE.

And then, the moment we have all been waiting for! 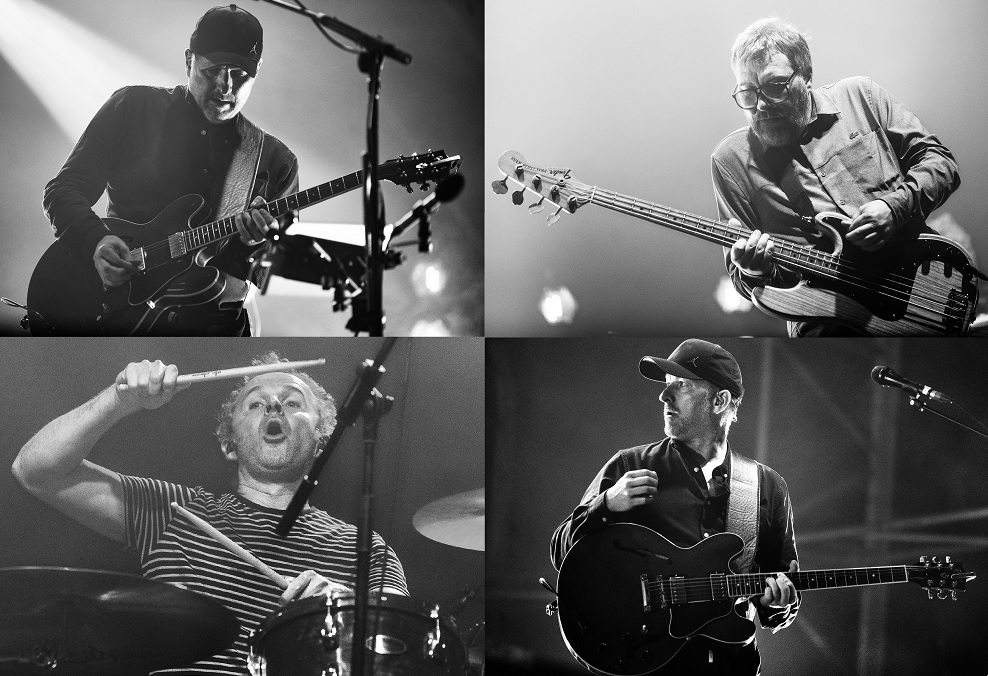 As Doves take the stage, I’m thinking of how to describe them already. I could do it in one word – Amazing!. I could do it in two words – unbelievably talented. I could go on, but watching the chaps take their places above me, there is something more about them. You can feel the expectancy in the air, something very emotional. These guys are loved. I can almost hear what people are thinking. Where have you been all this time? We’ve missed you!

Actually, the band has been on hiatus since 2010. In that year, Jimi Goodwin spoke to The Daily Record: “It’s nice just to have a bit of breathing space… We just wanted to get off that whole album-tour-album-tour treadmill. None of us are ready to face going into the studio for another two years. This is wiping the slate clean, we have nothing else in the vaults now. That is it. Whatever we do from now on will be a new start.”

…anyway, back to the gig. It’s an explosive set, covering their career to date. Every song has the crowd singing – and Jimi (who seems to be suffering with his throat a bit – some spray helps), looks genuinely touched by the support. He seems really humbled by the crowd joining in with songs from over 10 years ago, like he can’t believe they still remember the words!

Halfway through the set and guess what? Yeah that’s right – the heavens open. And it rains. It pours. But are the crowd deterred? No, they sing, shout and dance even harder!

The anthemic ‘Kingdom of Rust’ has Jimi joining in on drums to create an almost Brazilian carnival sound. For anyone seeing the band for the first time, it could probably be a confusing musical experience, with rhythms deviating between Trip-Hop, dance and purely anthemic rock.

An amazing experience to have seen this cult band, at such a unique venue. I shall never forget it.

Did you attend this concert or know anybody that did? Then check out our photo album of the fans HERE. 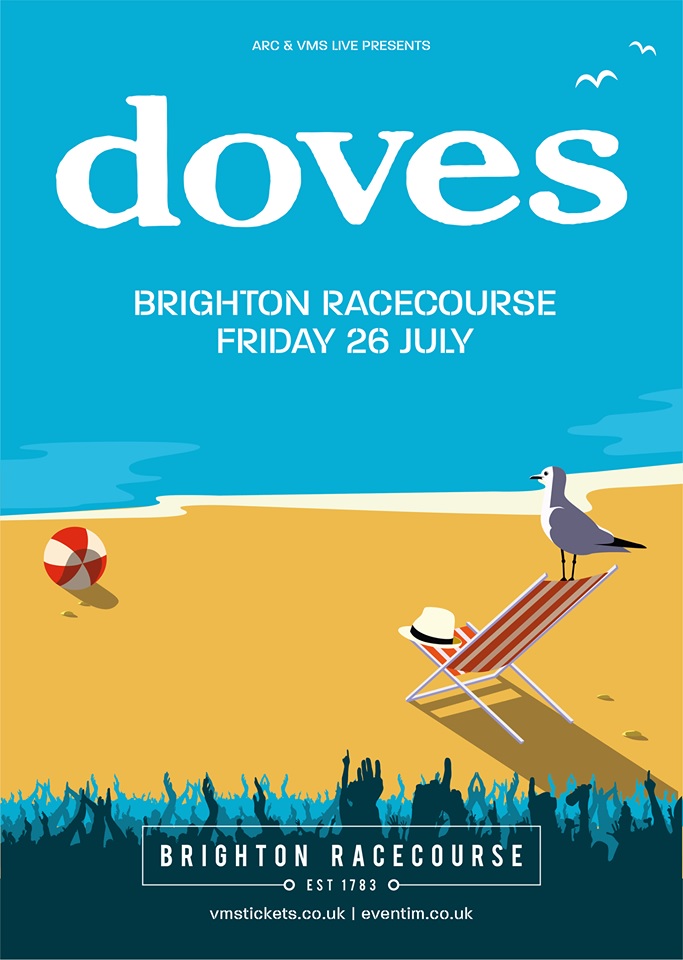 Albion stick four past Stockdale – impressive away win for Potter

Why it’s vital to block a bad Boris Brexit