Children who depend on free school meals are going without food now that the summer holidays have started, according to a union rep.

Unite Community regional secretary Clara Astill spoke out during a protest about universal credit – a new way of making one payment for six existing benefits.

As she and colleagues collected signatures at the Clock Tower in Brighton, for a petition against the combined benefits payment, she said that the new system was “fundamentally dysfunctional”.

She said: “Universal credit was created during Tory austerity to save money by cutting benefits to families and disabled people.

“Claimants suffer the most. They go through hell – unbearable waiting times – when they’ve got no money whatsoever.

“During the school holidays people are meant to be enjoying themselves but for people on universal credit it can be absolute hell.

“They’re struggling to feed their families. Children dependent on free school meals are going without food.

“Universal credit leaves people in destitution as they have to borrow money to buy food.”

Councillor Amanda Grimshaw went along to support the campaign. She represents Moulsecoomb and Bevendean ward – one of the poorest in Brighton and Hove. She also speaks for the Labour administration on equalities.

The single mother of four said that she had struggled to feed her family and had relied on food banks.

She said: “I’ve counted up I’ve gone through, when you add the children together, 70 humiliating school holidays.

“I call them humiliating because it’s the time when you can’t ignore as a parent what their other cohorts have.

“Your child is not going on a nice holiday, not going to the theme parks. You can’t even afford the £9 day out to Beachy Head or Eastbourne.

“What you’re forced to do is stay in your garden or the local park, and I’m saying this from life experience, and when you’ve got your children home all day, they’re hungry all day. 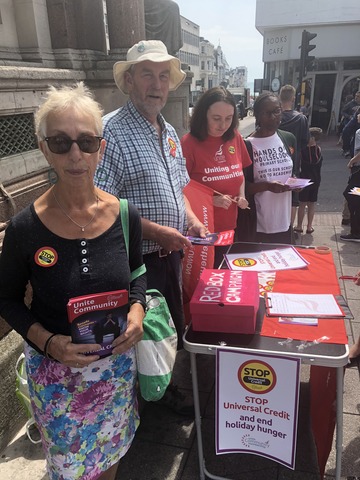 “It’s like a double humiliation. Every parent wants their child to have the best. During the school holiday you’re forced to face the reality that your children are not at the same level as their peers and it’s humiliating.”

She did not think people in the street were aware of poor children as they’re stuck at home and “invisible”. They are not going to the cinema or the shops in town.

Councillor Nikkie Brennan also went along to the protest. The Labour councillor represents East Brighton, a ward where people are poorer than average. Life expectancy is significantly lower than in wealthier wards in Hove on the number 1 bus route that serves both parts of the city.

She said that her brother was a head teacher in London and had told her that his pupils return to school after the summer holidays looking pale because they did not have the money to get out.

She added: “The cheapest food is the most fattening food. People moan at the parents for feeding their kids the wrong things but that’s all they can access.

“As good as food banks are, they can only supply processed food. 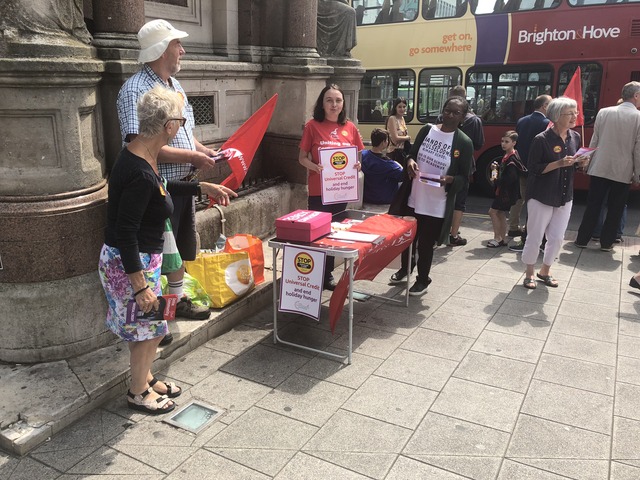 “These are working parents who are in this poverty. We need a safety net for decency and dignity.

“I know 30 per cent of my residents are living in poverty – 40 per cent when you add the housing costs – compared with Hove where it’s 26 per cent.

“You can get on a bus in Hove to Whitehawk and lose 10 years of your life.”

The Clock Tower protest was organised by Unite Community Brighton and Hove Group who want to “stop universal credit” and fight for families suffering with “holiday hunger”.

In May, Brighton and Hove City Council figures indicated that the amount of rent arrears for tenants claiming universal credit had trebled in a year from £160,000 owed by 498 tenants to £470,000 owed by 1,005 tenants.

At the end of March this money accounted for 42 per cent of all rent owed to the council, up from 23 per cent a year earlier.