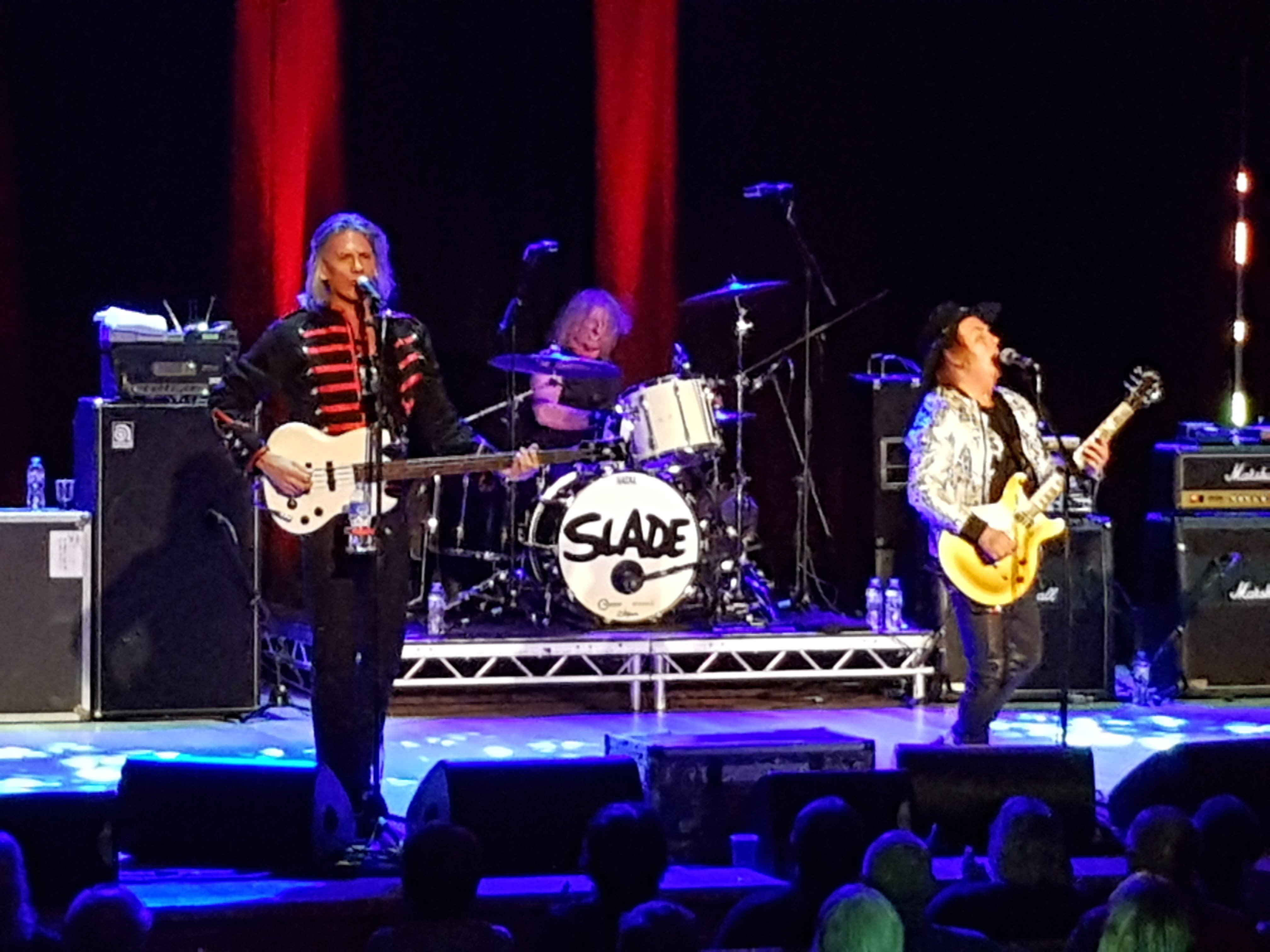 Seems as though Christmas has come early this year as Slade are heading back on the road again with their festive tour this November and December. They have announced a dozen gigs right across the country and rock on up in Sussex on Thursday 5th December, when they will be playing live at the White Rock Theatre in Hastings. Grab your tour tickets HERE. Hastings concert tickets can also be purchased HERE.

Slade are without a doubt one of the most exciting bands to come out of Great Britain in the past 50 years. With their unique blend of perfect pop rock’n’roll, outrageous flamboyance and pure fun, and no less than 23 Top-20 singles of which 6 were No-1 smash hits …plus 6 smash albums, Slade have become a firm favourite in the hearts of pop fans all over the world.

Slade first hit the road in 1966, touring throughout Great Britain and Europe and becoming a regular concert attraction. Joining forces with the former Animals bass guitarist and Jimi Hendrix Experience manager, Chas Chandler, Slade achieved their first chart hit in May 1971 with the Bobby Marchan song ‘Get Down And Get With It’ then, released in October of the same year ‘Coz I Luv You’ was the band’s first No-1 and a huge hit across Europe.

At the beginning of the eighties, Slade were invited to appear at the Reading Rock Festival, a massive annual event which attracted over 100,000 people. They literally stole the show, giving some of the worlds biggest rock bands a serious run for their money whilst kindling new interest from a whole new audience. As a result, the band signed a new record deal and unleashed the anthem ‘We’ll Bring The House Down’, which reached the Top-10 in the UK in January 1981. Slade were back!

Not content to rest on their Glam laurels, Slade began forging a new path through the hugely influential British heavy rock scene. A second successful appearance at Castle Donnington in 1981, before a crowd of over 200,000 people, consolidated the bands position and paved the way for the single ‘Lock Up Your Daughters’, and the album ‘Til Deaf Do Us Part’.

The early nineties saw the bands ‘Radio Wall Of Sound’ hit the UK Top-30 and thereby give Slade a solid 30 year chart run!

In 1991, due to the continual demand from around the world, founder Slade members Dave Hill and Don Powell decided to return to touring by playing a few select dates in Europe prior to embarking on what turned out to be a very successful two month tour of Australia.

Slade have continued to tour the world. They are firm favourites on the lucrative German festival scene and undertake an annual UK ‘Merry Christmas Everybody’ tour in December. They also have a huge following of fans and regularly play concert dates in Russia, Poland, Belgium, Holland, Sweden, Denmark, Norway, Finland, France and the Czech Republic.

Joining John on Lead Vocals and Keys is Russell Keefe, having played in many original bands in his early years and recording albums for Polygram & United Artists, Russell has toured with The Pretty Little Things and Les McKeown’s Bay City Rollers.

Slade today is still one of the most exciting bands on the road, and their stage performance is a dynamic, powerful and exhilarating roller-coaster ride of pure unadulterated rock’n’roll.

A date for your diary, Slade are back for Christmaaaas! 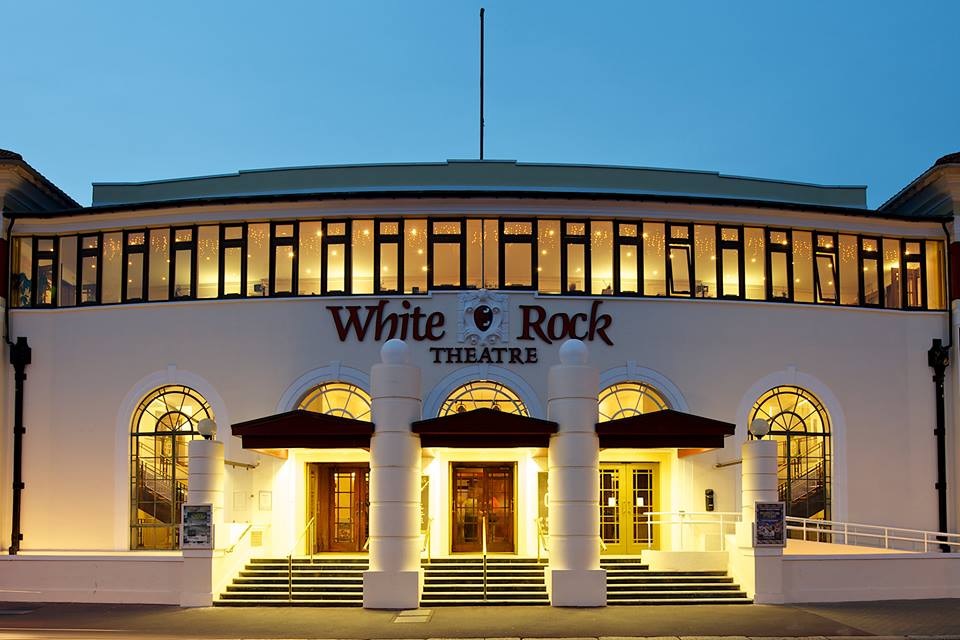 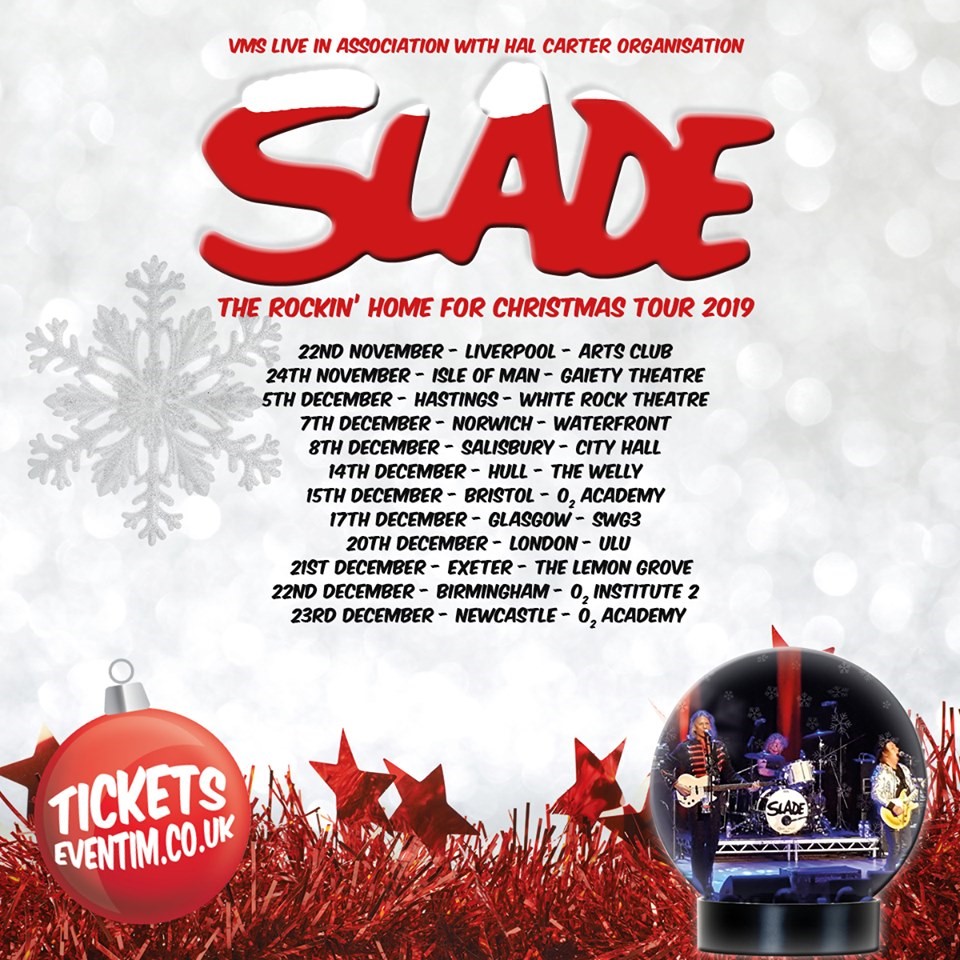