A vegan food and drink shop has been given permisson to sell vegan beers, wines and spirits.

Captain Pig, in Church Street, Brighton, was granted a licence to sell alcohol by a Brighton and Hove City Council licensing panel.

Neighbours told the panel that they were concerned about the increasing number of alcohol-related businesses in the North Laine area.

However, setting the vegan restriction was designed to prevent the shop being converted into a standard off-licence.

Owners Rob White and Claire Sedgewick suggested the council add the dietary restriction and committed to keeping alcohol in a locked cabinet in a bid to get the licence.

Mr White said: “If we move on then this licence restricts any future owners.

“We don’t want to upset the local residents. We only want to sell vegan products anyway.”

Members of the North Laine Community Association are concerned at the increasing number of licensed premises in the area.

The group’s licensing co-ordinator Sandy Crowhurst told the panel – at Hove Town Hall on Friday 16 August – the North Laine area had changed since the licensing laws were relaxed in 2005 to allow longer opening hours.

Since then, the number of licensed businesses had gone up from 20 to 76 in an area measuring just 600 square metres.

The shop is in the city’s cumulative impact zone, where no new off-licences are permitted unless exceptional circumstances are given.

This is to limit increasing alcohol-related anti-social behaviour in the area which includes the St Peter’s and North Laine electoral ward.

In its decision, the panel, made up of Labour councillors Jackie O’Quinn and Theresa Fowler, along with Conservative Dee Simson, said they felt the shop’s daytime opening hours and specialist offering, made it exceptional.

Their response said: “We considered that a number of factors combined to make this application exceptional, including the vegan only offer; the limited range of alcohol to be offered; the applicants’ ready acceptance of restrictive conditions; the alcohol storage arrangements; limited day time trading hours and the size of the premises. 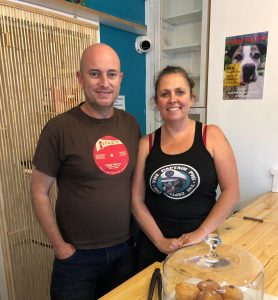 Additional restrictions on the new licence are

a) All alcohol for sale must be stored in the “locked display cabinet for alcohol” as marked on the application plan submitted and shown as Appendix B of the report. Products in the cabinet must not be chilled.

b) Only vegan alcohol products may be sold.

c) Only beer, wine and cider may be sold from the premises.