Consultants have been given a two-year contract worth almost £500,000 to save about £300,000 from the home to school transport service for Brighton and Hove’s most vulnerable children.

The revelation has drawn criticism from Conservative leader Steve Bell who said: “Money is effectively being taken from those schools and those children to line the pocket of consultants.”

Councillor Bell has also been unhappy at the way that the consultants’ approach has been linked to safety concerns for children with special educational needs and disabilities (SEND).

Children have been seen banging their heads against the windows of their vehicles as they sit in queues of traffic outside special schools at the start of the school day.

Others have missed school altogether because of what one parent said was the worst chaos that he had seen in his 11 years as a governor.

Councillor Bell spoke out after it was revealed that Brighton and Hove City Council had agreed to pay up to £499,000 to Edge Public Solutions, from Macclesfield, Cheshire.

“The sum referred to in the register of tenders is the maximum contract value over two years.

“The actual payments are dependent on performance under the contract, including delivering savings.

“Edge was contracted, working alongside the council, to manage and deliver the transformation of the service, this includes a small team of staff, creating a dynamic purchasing system (to modernise the route allocation process) and project managing the service.”

Edge describes itself as a “local government transportation consultant and management experts”, offering “innovative demand management solutions”, with an “innovative “risk/reward” delivery model” which it said was “100 per cent self-funding”.

But the Tory leader said: “Children and their families are suffering as a result of the council’s approach to this crucial service.

“The Labour administration say their chaotic changes will save £290,000 from the council’s budget over two years.”

The council said: “The net saving for the council in the first two years is in the region of £300,000.

“However, this is an ongoing programme that will deliver more savings over a longer timescale than the two-year involvement of Edge.

“The aim of the change is for the service to cost less to run in year three and onwards when the service transformation has been embedded.”

Councillor Bell criticised changes under the new contracts which prevented driver and escorts from being able to take children into school as they did previously.

Instead teachers and teaching assistants are having to carry out this role – one of the factors leading to dangerous queues of traffic at the two special schools and one which is costing valuable lesson time.

He said: “The two special schools worst hit by these changes estimate the new arrangements will cost them about £840,000 – money better spent on teaching and caring for hundreds of our most vulnerable children.

“What has upset many parents – beyond the unsettling chaos – is that money is effectively being taken from those schools and those children to line the pocket of consultants.” 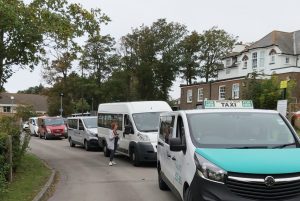 The council said: “There are 480 pupils in total needing home to school transport. Not all children need help going into the school.

“We are working with schools to fully understand the amount of time being taken to escort children into school from the vehicles transporting pupils.

“The situation varies from school to school and each pupil. It usually takes no more than a few minutes to escort a pupil into school if they need support.

“Following concerns raised by the special schools, we have agreed that last year’s arrangements will continue this term.

“This means pupils can be escorted inside by drivers and assistants, not school staff, where this is needed.

“The figure of £840,000 has been linked to the suggested time needed to help pupils from vehicles to the school buildings by school staff. This figure does not match the information we’ve been given.

“Also, the situation is being resolved now so will not be ongoing for two years.” 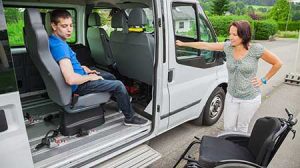 Councillor Bell also said: “We have also been unhappy about the undemocratic way the council handled the procurement process.

“It was railroaded through behind the scenes and children and families are now paying a high price for that negligence.”

He added: “Any contract which the council awards over £500,000 must be approved by elected councillors. Then the details can be properly scrutinised and key decisions take place in public.

“It may be no surprise that this contract is worth £499,000 over two years so all the decisions could be made behind closed doors by the Labour administration.

“It allowed no public scrutiny about how taxpayers’ money would be spent – or the potential damage this could inflict on our most vulnerable children.”

And Councillor Bell said: “We have been frustrated at every turn when we have tried to speak up for children without a voice as their families try to find out how this would affect them and their education.

“We have submitted letters and spoken out at two council committees. There was a public apology at one committee and agreement that officers would ask colleagues from another council to look into what went wrong.

“But when we asked for a genuinely independent investigation overseen by elected councillors, this was refused by the Green and Labour coalition running the council.”

One parent said: “The next move from Edge and (the council) will be to revise the transport policy, ie, fewer families will qualify, and then slide in a charging system for post-16 transport.

“That’s what they’ve done elsewhere and proudly boast about the £500,000 savings.”

Edge cited its work in Enfield, in London, on its website, saying: “After only one year we have delivered and signed off savings of £860,000 which has (sic) been realised from a number of initiatives.

“Adult social care transport routes have been reduced from 25 to 16 with an annualised saving of nearly £500,000.

“We achieved this by working to find alternative travel options for clients (regular client numbers reduced from 325 to 265) as well as utilising innovative software to reroute journeys.

“We have worked with services and other partners to manage this demand through more robust challenge of entitlement and driving independent travel opportunities.”

The effects in Brighton and Hove have included parents withdrawing children from the home to school transport service and looking to bill the council for alternative transport.

And routes have been drawn up that have meant that children with conflicting needs are sharing a vehicle.

At least one child has been assaulted by another, with one parent understood to be consulting specialist solicitors, possibly with a view to bringing legal action against the council.

Councillor Bell said that he and his party were taking on Labour and the Greens to speak up for children who had no voice of their own.