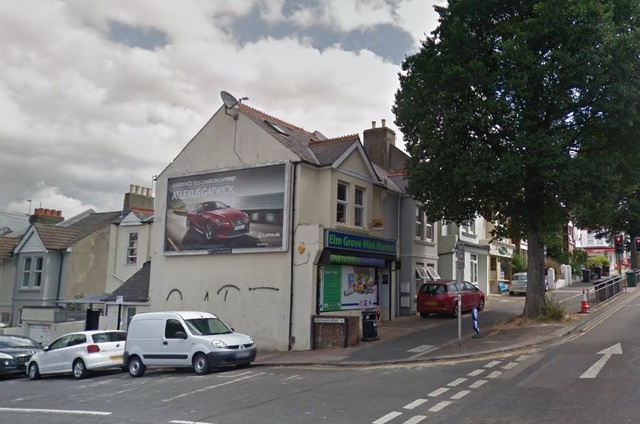 An illuminated billboard which residents feared would turn a residential street into Las Vegas has been refused.

More than forty people objected to the plans to replace a standard billboard on the side of a shop on the corner of Elm Grove and Bernard Road with an electronic one.

All three of the ward’s Green councillors also objected, asking for it to go before the planning committee if recommended for approval.

But in the end, planning officers rejected the application from Clear Channel under delegated powers.

In his report, planning officer Jack Summers said there was no record of the non-illuminated board ever having been given approval.

He said “No express advertisement consent has been found authorising the existing non-illuminated billboard, though Google Street View images evidence that it has been in place in excess of ten years and it is considered that it benefits from deemed consent … Its continued presence and the lack of any enforcement action to date must be given some weight in the planning balance.

“However it should also be noted that the deemed consent of the existing billboard could be removed through the issuance of a discontinuance notice if the local planning authority considers that substantial harm to amenity is caused by its display.”

He said an application for an illuminated board at the site was refused consent in 1996 and a subsequent appeal dismissed, partly because of the impact on the residential area.

He added: “Although the site is not within a conservation area, the local area does have a firmly established traditional character and the introduction of a modern illuminated billboard would cause harm to the visual amenity of the area.”

However, it was not accepted that the board would be a distraction to motorists because the images displayed would be static.

Objections on the basis that the board would have a negative impact on public safety, the environment, property value and the dangers of it being hacked were all deemed irrelevant to the planning process.