Moon Duo send parishioners on a trip in ‘The Ark’ 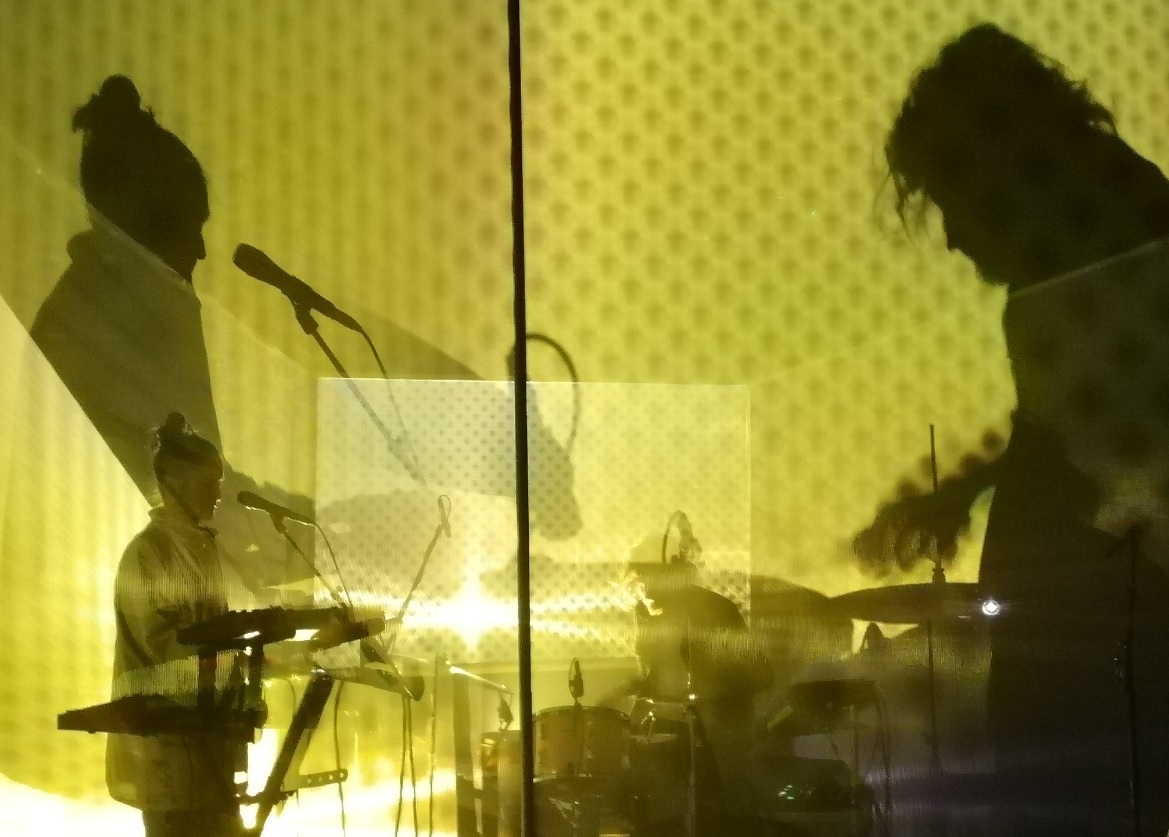 Tonight’s Moon Duo concert in Brighton was one that will be remembered for several decades to come! Quite a bold opening statement you think eh? Well, if you were there then you will absolutely totally get it, if not, then where the hell were you?

“So why was this evening THAT amazing, and who are Moon Duo anyway?” I hear you ask. Well, I will endeavour to explain then. 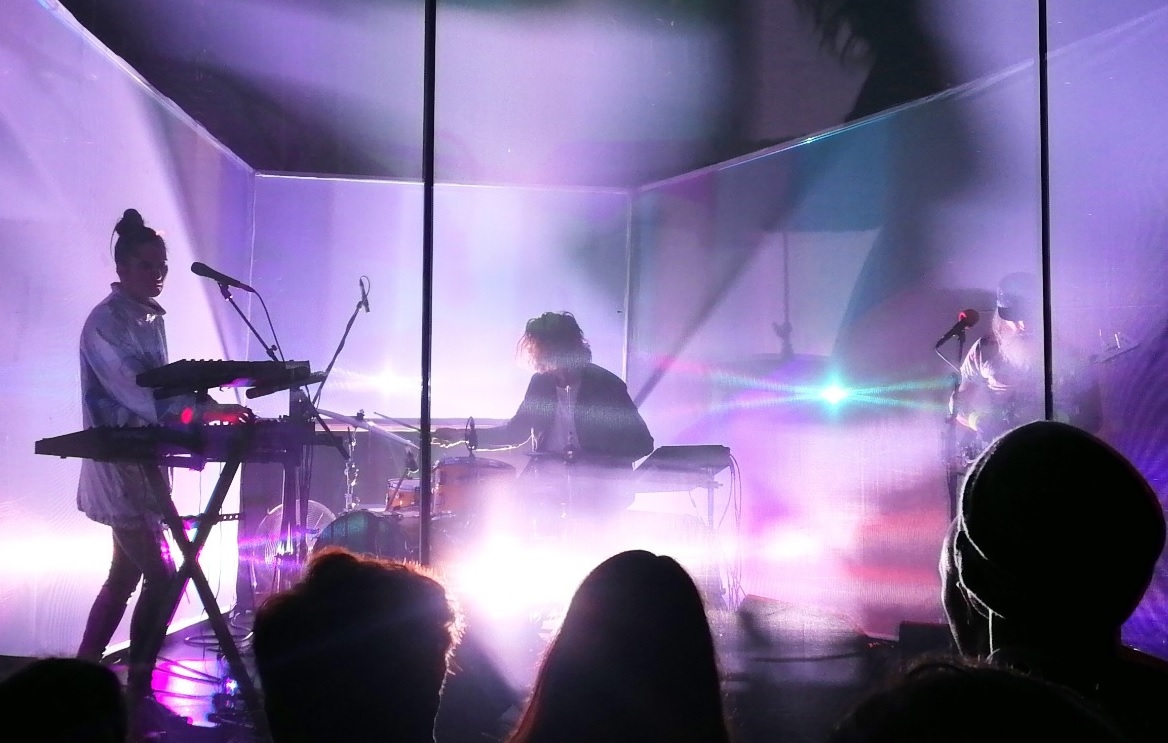 Moon Duo are an American psychedelic space rock outfit. The band is essentially the couple of Ripley Johnson (who is also a member of Wooden Shjips) on guitar and vocals and Sanae Yamada on keyboards and vocals. For live and studio work they recruit John Jeffrey on drums, therefore tonight they were indeed a trio.

They have been releasing records for a decade now and they record their albums where they are based at the time, such as in Portland (Oregon’s largest city) and San Francisco, but crucially their albums are mixed in Berlin. To me this is an important point, as it seems to sum up their psychedelic drone rock sound like that of ‘Ghost Rider’ by Suicide and with that of earlier Germanic sounding classics such as ‘Autobahn’ by Kraftwerk. In that I mean the music takes you off on a journey of musical repetition just like a tribal chant. 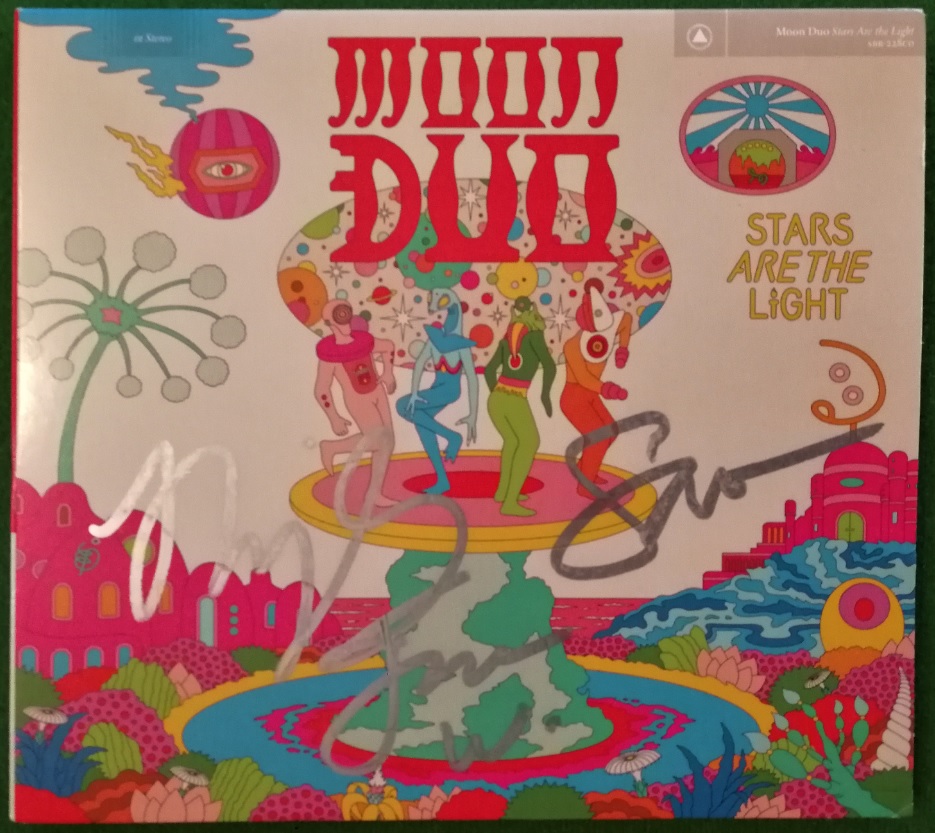 My signed CD of ‘Stars Are The Light’

However their brand new album ‘Stars Are The Light’ (which was released on September 27th via Sacred Bones- order it HERE) was in fact not mixed in Berlin, but at Sonic Boom’s New Atlantis Studio base in Sintra, Portugal. Sonic Boom being aka Peter Kember, is arguably best known as the co-founder of Spacemen 3. Thus the new platter sounds like no other previous Moon Duo release. The band are fully aware of this ‘new direction’ and Sanae Yamada commented: “We have changed, the nature of our collaboration has changed, the world has changed, and we wanted the new music to reflect that.”

Taking disco as its groove-oriented departure point, ‘Stars Are the Light’ shimmers with elements of ’70s funk and ’90s rave. Johnson’s signature guitar sound is at its most languid and refined, while Yamada’s synths and oneiric vocals are foregrounded to create a spacious percussiveness that invites the body to move with its mesmeric rhythms.

On embracing disco as an inspiration, Yamada says, “It’s something we hadn’t referenced in our music before, but its core concepts really align with what we were circling around as we made the album. Disco is dance music, first and foremost, and we were digging our way into the idea of this endless dance of bodies in nature. We were also very inspired by the space and community of a disco – a space of free self-expression through dance, fashion, and mode of being; where everyone was welcome, diversity was celebrated, and identity could be fluid; where the life force that animates each of us differently could flower.”

So with all of that said, with a new sound comes a new live set and a new way of presenting themselves. Moon Duo were last in Brighton on 6th April 2017, where they performed a terrific set at The Haunt (which is now now as CHALK). I was there and reported “With the combined swirling sounds of synths, guitar and drums and a tremendous strobe light show – it was enough to make anyone’s eyes water and head buzz. I haven’t seen such a trippy light show for nearly three years, with the previous one being The Horrors concert on Worthing Pier. Tonight it sure played havoc in trying to get a decent photo or two”.

This evening, Moon Duo had certainly thought ‘outside the box’ regarding how to present themselves, and thus performing inside a trapezoid shaped fine mesh structure was the order of the day. Not only that, but they were certainly not going to just rock on up to your usual Brighton concert venue, they were appearing in Brighton’s magnificent neo-gothic St Bartholomew’s Church in a way never seen before! That’s the enormous red brick building located behind London Road, which is apparently said to have been constructed to the same dimensions as Noah’s Ark. The church is a Grade I-listed building, meaning that it is a building of outstanding or national architectural or historic interest. Read more about it HERE.

So last time at The Haunt we could barely see Moon Duo because of the excessive use of smoke machines, whereas this time around however, they would often be totally immersed within a shower of colourful images and graphics being projected into the trapezoid from directly behind and from the sides. This was an inspired move and the blitz of varying graphics certainly blew everyone’s mind. It was the closest you can get to ‘a trip’ in a church that’s possible!

This was the last of seven UK dates and was most definitely the way to see off the UK leg of the tour. Sanae informed me after their set, that they had performed at some great locations on the tour “but nothing like this.” 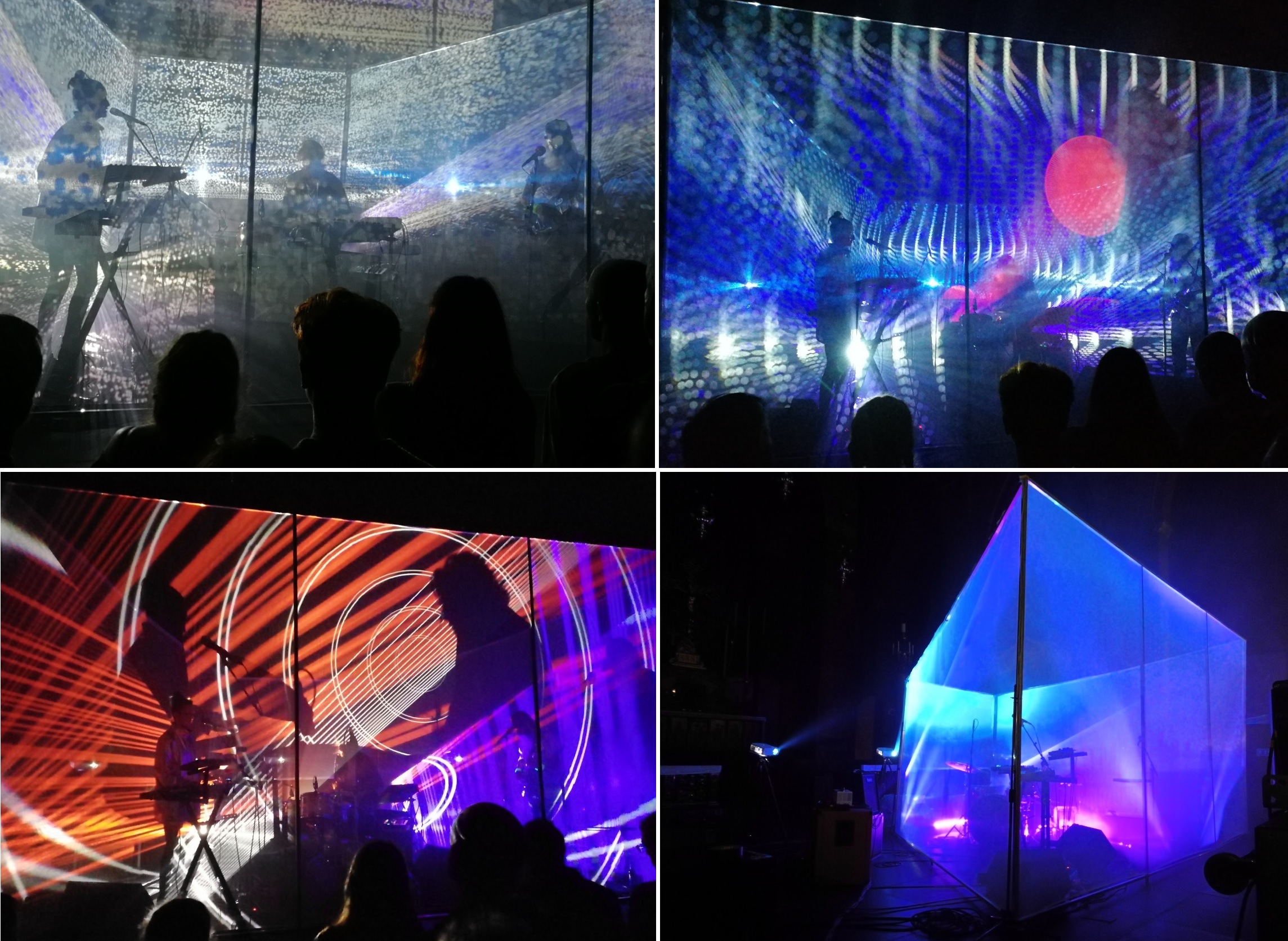 Tonight, their set lasted 1 hour 26 minutes in total and due to the nature of the setup, there was no support band. We didn’t need one. We just stood there in awe, indeed no pews or benches tonight, and we looked mainly up …all the way up.

Prior to the performance, I was a tad worried that due to the vastness of the space and the height of the structure, that the sound we be lost in the eaves and that it would be cold. Thankfully I was wrong on both counts. You would really expect that a structure that is 52m (170ft) long, 18m (59ft) wide and the roof is 44m (144ft) high, would have been a hindrance, especially as the absence of side-aisles and chancel further enhances the experience of height, but this was certainly not the case. It is reckoned that St Barts is the tallest of any parish church in the British Isles.

This was my first music concert within these hallowed walls and I will always remember it! I have been regularly going to gigs in Brighton since 1978 and I can’t believe that this is the first time I have been here. I surely hope that this venue will secure itself more on the promoters radar!

Tonight they let the music do the talking, there was no idle banter in between tracks or discussions about what the meaning of each song is or how wonderful Brighton is, they simply professionally got on with it. They kicked off at 8:15pm on the dot and our ‘trip’ in the Ark finished at 9:42pm. It was a totally immersive experience and the punters who were a varied cross-section of society, each enjoyed the dozen tunes in their own way, either by standing and staring motionless, or letting their hair down as though they were at Woodstock. The music was hypnotic to say the least, especially with the motorik drumming and in between each track the keyboards made cricket/jungle sounds.

They played a handful of tracks from the new 2019 ‘Stars And The Light’ album, plus one track from 2018, which was their cover of Alan Vega’s 1980 album opener ‘Jukebox Babe’ (Vega having been 50% of Suicide). They performed four tracks from the previous 2017 ‘Occult Architecture’ albums, just one from 2015’s ‘Shadow Of The Sun’ and just one cut from 2012’s ‘Circles’ album. This set was vastly different from the previous one that I had witnessed at The Haunt and still did not include the Sigue Sigue Sputnik style ‘Cross-Town Fade’ or ‘Wilding’, which are my fave tracks. Last time around they completed their set with a cover of ‘No Fun’ by The Stooges, which was also legendary covered by The Sex Pistols. That was the standout track of the night. This time around, I don’t actually think that I could pick one. My eyes were so engaged, that at times my ears almost took second place. So I guess that I preferred the music from their 2017 show more than tonight’s, but the whole spectacle of tonight’s show totally blew the previous one out of the water! Let hope that they return very soon.

More info on Moon Duo can be located here moonduo.org 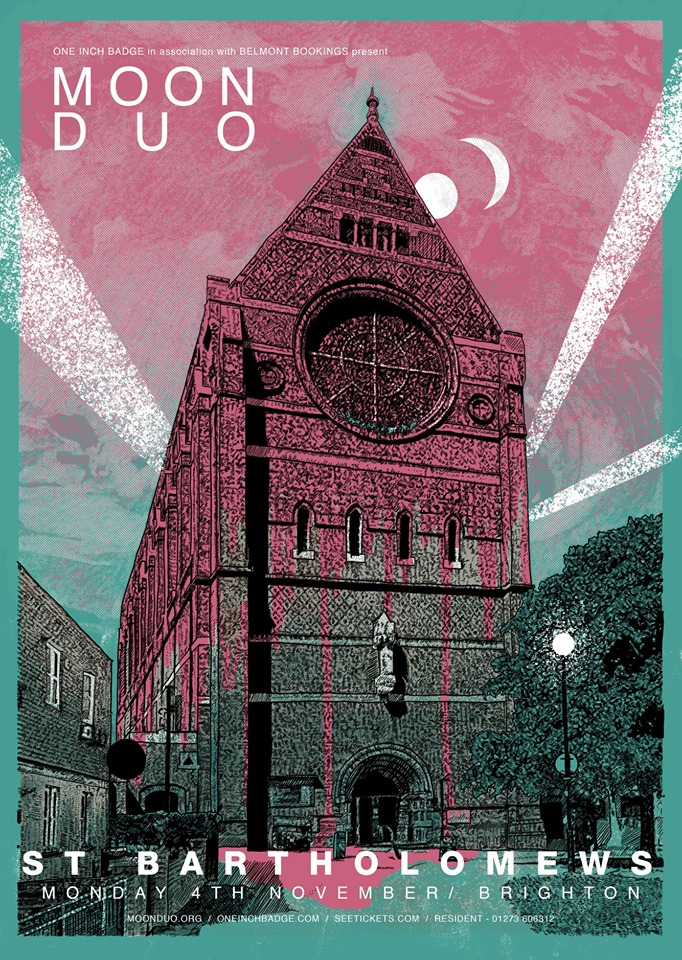 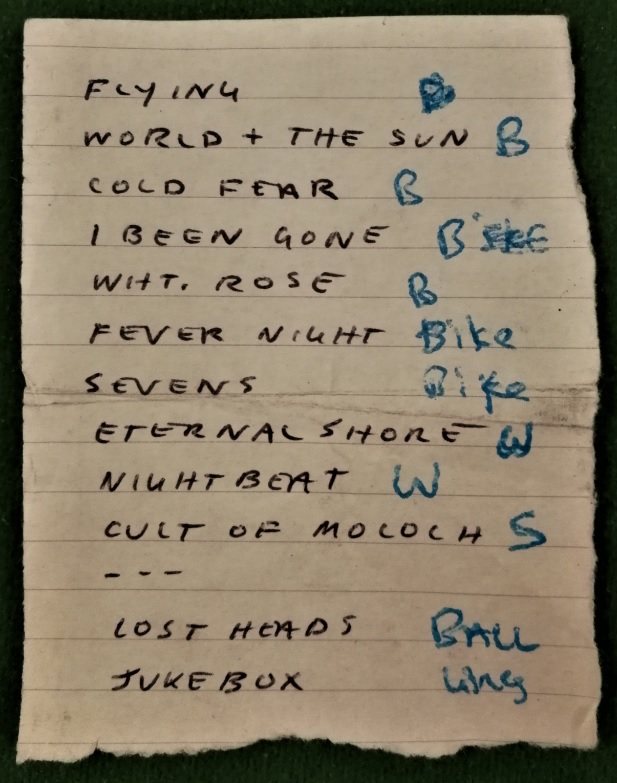 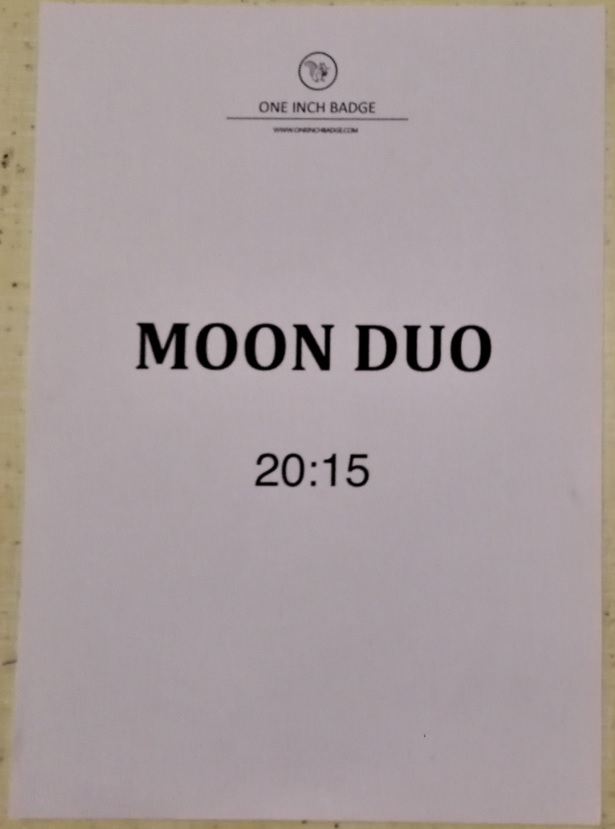