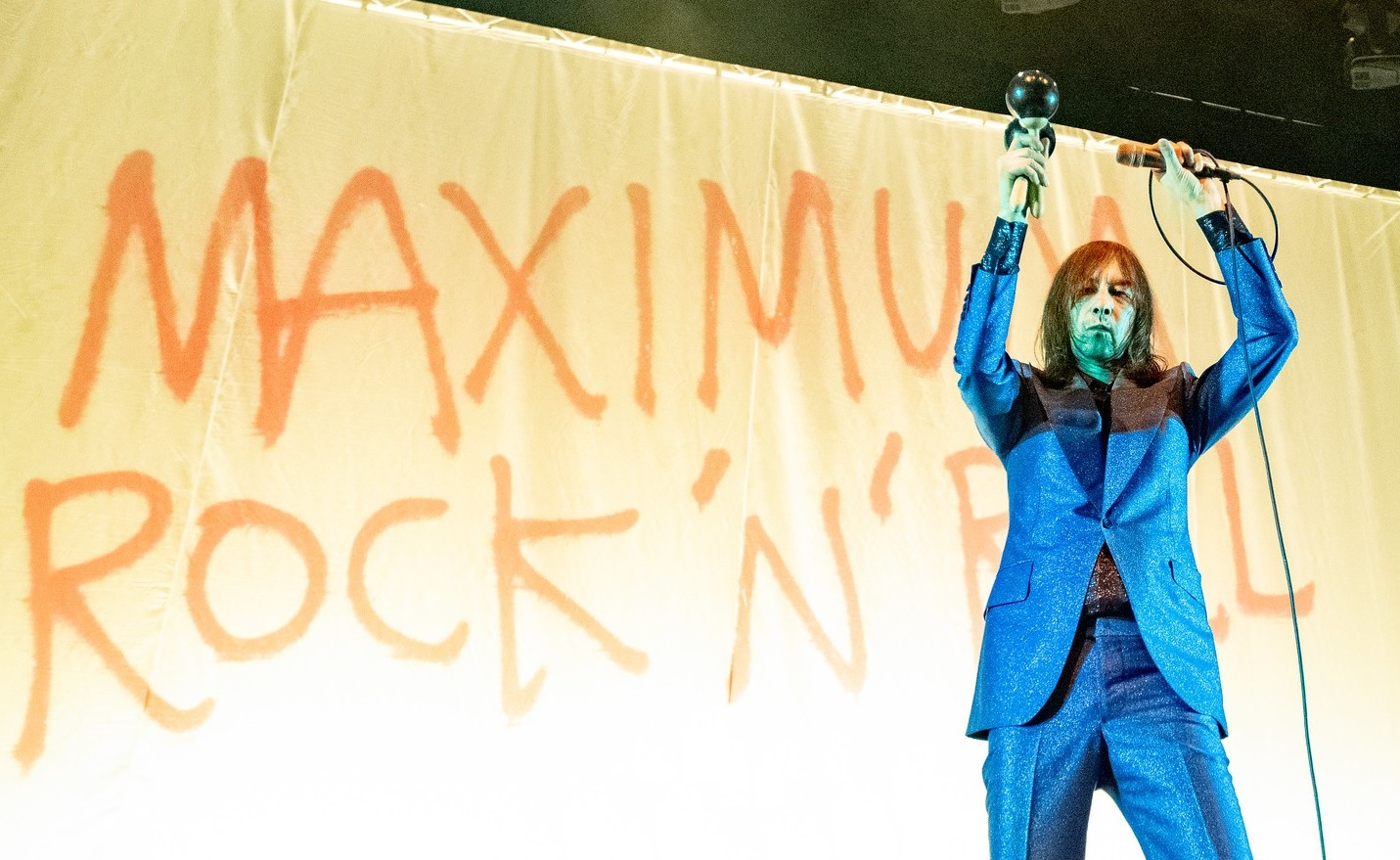 It’s quite amazing really to think that the former kings of distortion, The Jesus And Mary Chain, almost certainly wouldn’t have made it if it wasn’t for the actions of the frontman of Primal Scream.

Back in 1984, Glaswegian Bobby Gillespie did the simple act of handing a demo tape of ‘tunes’ by East Kilbride brothers Jim and William Reid to fellow Scot Alan McGee, who decided to put a gig together for the fellow countrymen in June of that year. The Reid’s turned up and were soundchecking before the concert and McGee was so blown away, he signed them there and then to his new Creation Records label that had been formed the previous year. McGee became their manager and they released the debut 7” ‘Upside Down’ for The Jesus And Mary Chain. Shortly afterwards Gillespie was recruited as their drummer, despite the fact that he had actually formed Primal Scream two years earlier.

Thankfully for us punters here this evening at Brighton Dome Concert Hall, Gillespie had decided to persevere with Primal Scream and not stay with ‘the Mary Chain’, otherwise we would not be celebrating the 37 year career spanning set from Gillespie and his pals.

Tonight is date 3 of 17 on the ‘Maximum Rock ‘N’ Roll’ tour, which is named after Primal Scream’s latest ‘singles collection’ ‘Maximum Rock ‘N’ Roll (The Singles Volume 1 & 2)’ which was released in May. If you want to start somewhere with the band, then arguably this release is the ideal starting point – check out the formats HERE.

It was pretty certain that those gathered here tonight were going to be able to hear some mighty fine material and for those that were lucky enough to attend their pre-tour warm-up set at The Haunt (now CHALK) back on 20th May, then tonight would offer you an additional three more tracks, with the set running to 18 tracks instead of 15.

The first thing that I suspect everyone noticed upon entering the hall is the giant backdrop with the new album’s title on it, ‘Maximum Rock ‘N’ Roll’. This reminded me of the similar style for Ramones ‘Rock ‘n’ Roll High School’, film and album – a good omen me thinks!

The lights went down three minutes early and The Clash’s ‘London Calling’ was bellowed out through the speakers! Another good omen! 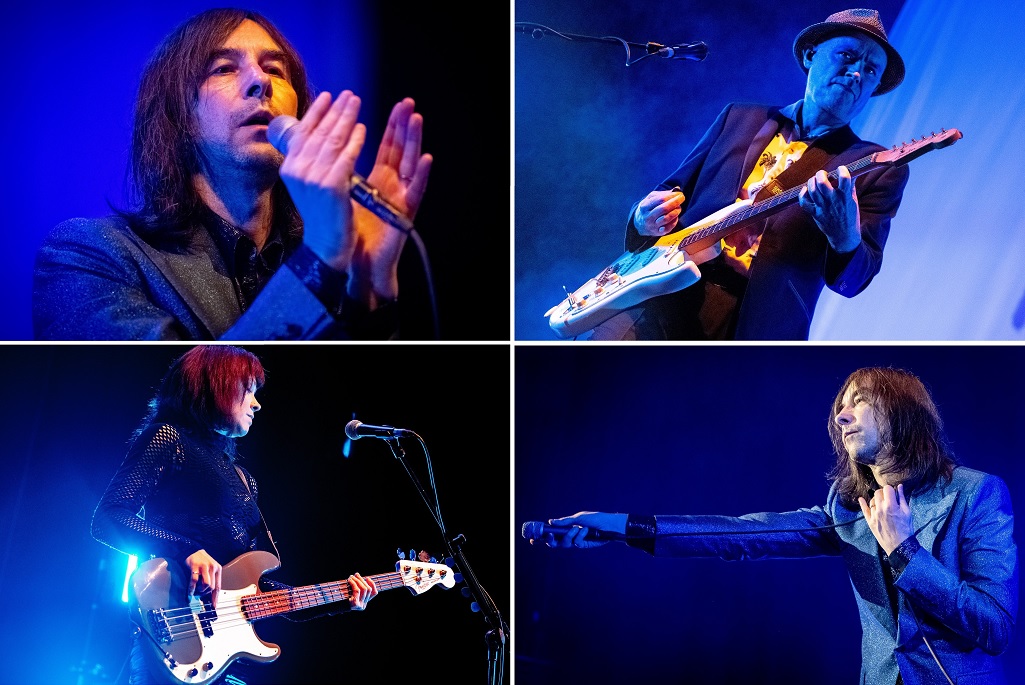 The quintet stroll on stage to a rapturous welcome and the bird tweet style keys get under way, it can only be the funky ‘Don’t Fight It, Feel It’ from the first of their seven in a row Top 10 albums, the hugely popular ‘Screamadelica’ from 1991. Live this sounds like the Rolling Stones having a go at funk, rather than a supplement to the ‘Madchester scene’.

This is swiftly followed by the monster that is ‘Swastika Eyes’, the first of a trio of tracks found on their 2000 ‘Exterminator (XTRMNTR)’ album. Many people in The Dome tonight certainly won’t agree with this, but for me this was by far the best track of the evening. It’s a bangin’ tune that mixes up all of the wonderful components of acts such as Sumner and Marr’s ‘Electronic’, with Sheep On Drugs and not surprisingly The Chemical Brothers who remixed the track. The sound was crisp and loud and those gathered seriously bopped! It was worth coming here tonight to just hear this played live! So everything else for me is now a bonus.

Keeping the ‘having it large’ theme going, they continued with electronic dance corker ‘Miss Lucifer’, which seriously needs to be double in its length. ‘Can’t Go Back’ was up next, which highlighted the spectacular musicianship on offer for us tonight. ‘Accelerator’ assured our move across into The Rolling Stones meets The Jesus And Mary Chain territory, with its “Come On, Come On” lyrical earworm.

‘Kill All Hippies’ followed and Gillespie assured us that they actually love hippies and he introduced keyboardist Martin Duffy to us. He’s been in the band for 30 years now, so many already know him, one would think.

‘(I’m Gonna) Cry Myself Blind’ was next and brought the mood right down. Strangely it reminded me of Kings Of Leon’s ‘Use Somebody’, and could easily be a Rod Stewart or Rolling Stones hit from the 1970’s. Whilst we were chillin’, they continued with the similar ‘I’m Losing More Than I’ll Ever Have’. I get the idea of mixing up their musical styles in one gig to keep all the fans happy, but I felt that these two were the weakest in the set. Thankfully I was rescued by the catchy 92 seconds of jangly guitar work of ‘Velocity Girl’, blinked and you would have missed it.

The set seriously picked up with the catchy “Lalalalalalalala” of ‘Dolls (Sweet Rock And Roll)’, which certainly needs to be checked out by avid fans of ‘Ziggy Stardust’ era Bowie, Lou Reed, Mott The Hoople or Tom Petty at a push. Can’t believe it wasn’t written in 1972! Great song!

‘Burning Wheel’ from 1997’s ‘Vanishing Point’ album, was like a throwback to those heady trippy days of Madchester and previous hippiedom with added Blur thrown in. “If you could see what I can see; Feel what I feel; When my head is on fire…”

2016’s ‘100% Or Nothing’ was surprisingly a whole decade younger and any other track performed tonight. Sounding a tad like later New Order it was a prequel to the crowds highlight section. It was here in proceedings before playing ‘Loaded’ that Gillespie informed the crowd that Primal Scream had relocated to Brighton during those heady acid house days.

Interestingly enough, it was said to be the aforementioned Alan McGee that got Gillespie and gang into the ‘acid house’ scene, whilst they were living here. Gillespie said that in town during 1988,89 and 90, they used to love jumping from one Brighton club to another, as they were (and still are) close to each other. I’m pleased that he flagged up the Zap Club here, as I can recall seeing many decent gigs played there including The Shamen, Utah Saints, Portion Control and The Flowerpot Men. 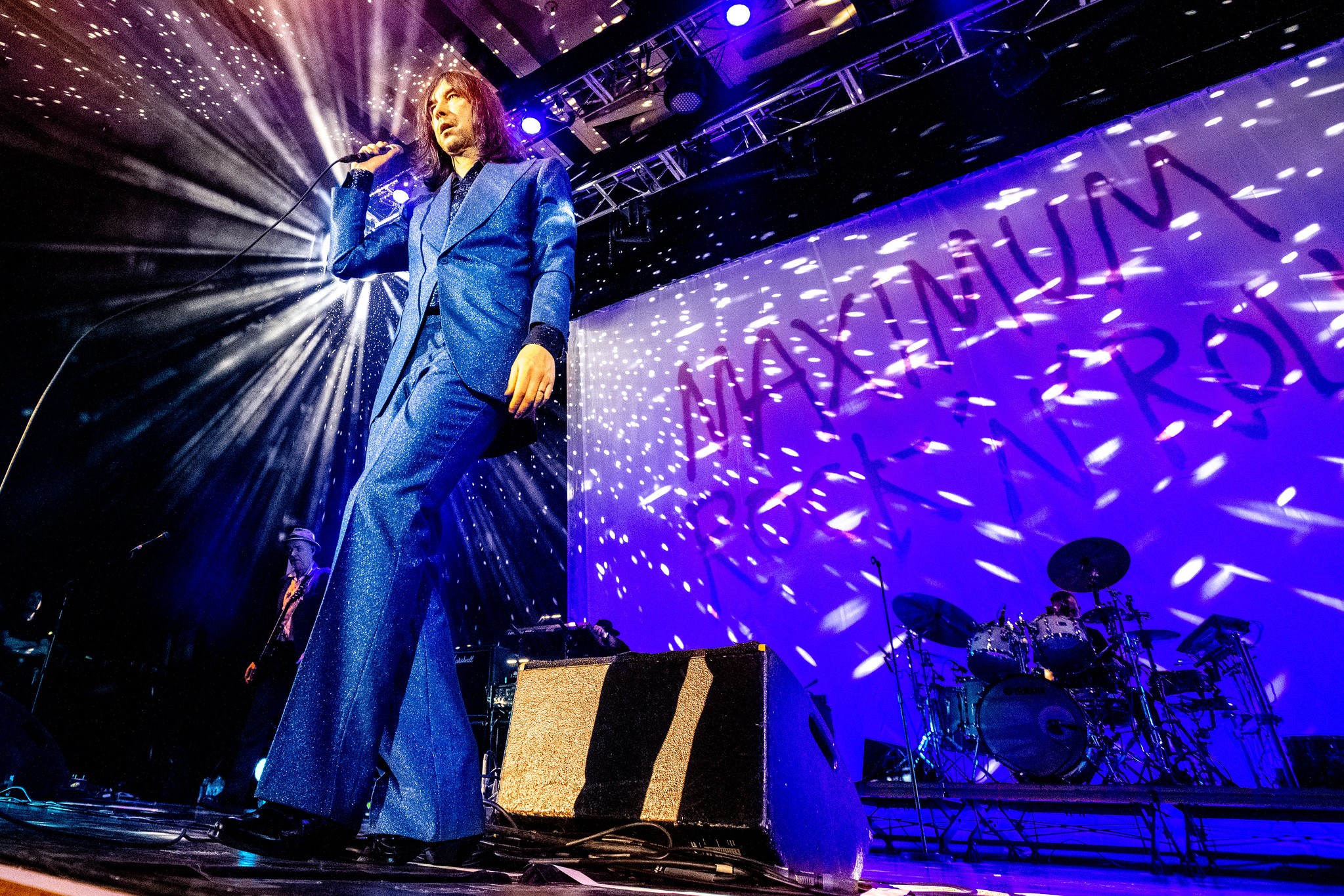 Anyway, Gillespie went on to inform us that it was in Brighton that they met Andrew Weatherall which was a game changer for the band. ‘Loaded’ was the single that changed everything for Primal Scream. It started as a simple request from band member Andrew Innes to Andrew Weatherall for a remix of the song ‘I’m Losing More Than I’ll Ever Have’ off the group’s second (and self-titled) album. Weatherall did one, slightly hesitant remix of it, and was then told by Innes to get radical with the rearrangement (real wording HERE). Weatherall tossed the original Bobby Gillespie vocal and reworked the song completely, adding a looped beat he sampled from an Italian bootleg 12″ remix of Edie Brickell & The New Bohemians’ song ‘What I Am’ (which itself used a lifted beat from Soul II Soul.) The pro-hedonism sample that introduces the song is of Peter Fonda dialogue from the 1960’s motorcycle counterculture film ‘The Wild Angels’. The sample serves as a statement of intent not only for the song, but also the then-forthcoming album ‘Screamadelica’, and, essentially, the entire Ecstasy era. The success of the resulting rock/electronic hybrid went to No.16 in the UK charts and set the template not only for Primal Scream’s future career, but for an uncountable number of indie bands from that moment on. ‘Loaded’ and the groundbreaking album ‘Screamadelica’ were substantially instrumental for revitalising independent rock and dance for a new decade.

It is therefore not surprising that the loudest cheer of the night was after ‘Loaded’ had finished. It was very nearly deafening!!! We were putty in their hands, so time for another ‘Screamadelica’ masterpiece ‘Movin’ On Up’, which certainly cemented the party atmosphere, with virtually everyone up in the balcony up on their feet and dancing. ‘Country Girl’ was the pre three track encore track, which was lead by the epic ‘Screamadelica’ anthem of ‘Come Together’, which Gillespie had actually written in a rehearsal room in ‘The Laines’. Another feather in Brighton’s creativity cap.

They saw us off with two tracks from 1994’s ‘Give Out But Don’t Give Up’ album, namely ‘Jailbird’ and ‘Rocks’. Come on then, for those of you that were there, who was singing “Get yer rocks off, get yer rocks off, honey: Shake ’em, now-now, get ’em off downtown” on their way home then?

My colleague Martin honestly rated it as one of his favourite gigs of the whole year and he’s been to scores of them with me! Praise indeed.

For all things Primal Scream, check out their official website – www.primalscream.net 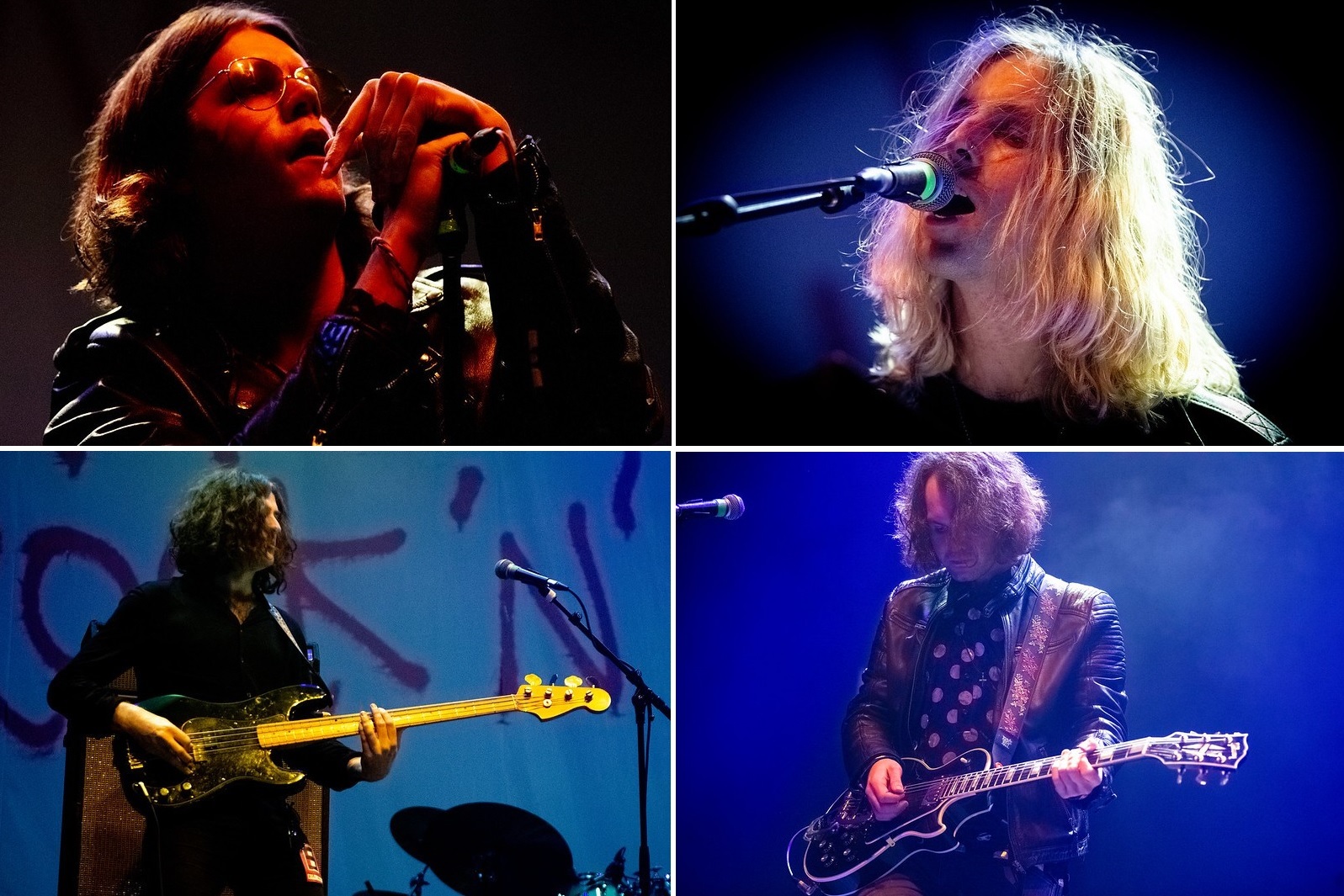 A big shout out tonight must also go to Bristol based quintet Holy Youth Movement, who performed an absorbing handful of tunes during the sadly brief 25 minute set. Shame on those of you that were several deep at the bars, during their performance, you missed a good solid set.

Sadly there were only a fraction of the audience watching these guys perform. Did this put them off from going for it? Nah! The more songs they played, the better they got. There was the usual vocalist, guitar, bass and drums going on, but they had added synths, which worked an absolute treat. It gave them that extra dimension and tune four ‘Tranquilizer’, was powerful and reminded me of The Horrors meets The Cult, and the synths were adding that vintage Dr Who theme meets Hawkwind element. Their final number, the enchantingly titled ‘You Thought I Was Dead But Baby I’m Just Getting Started’ could arguably be seen as a rocky version of Blondie’s ‘Call Me’. At 8:25pm they were done! Missed them? A guy called Dan Leigh didn’t. He’s posted “Went to see Primal Scream and these guys were supporting and they’re amazing!”. So keep an eye out for ‘HYM’. I reckon they are THE ideal band to play The Great Escape 2020…hint! Hint! Lads! 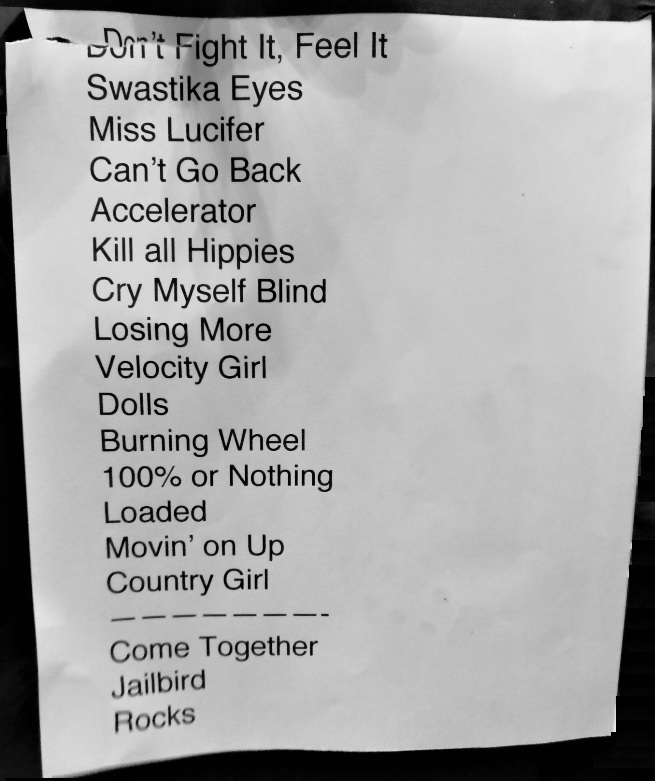 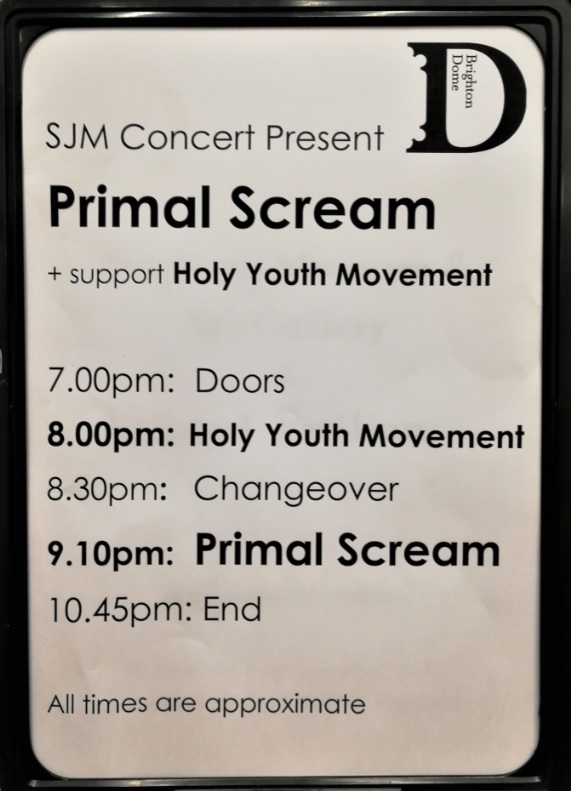 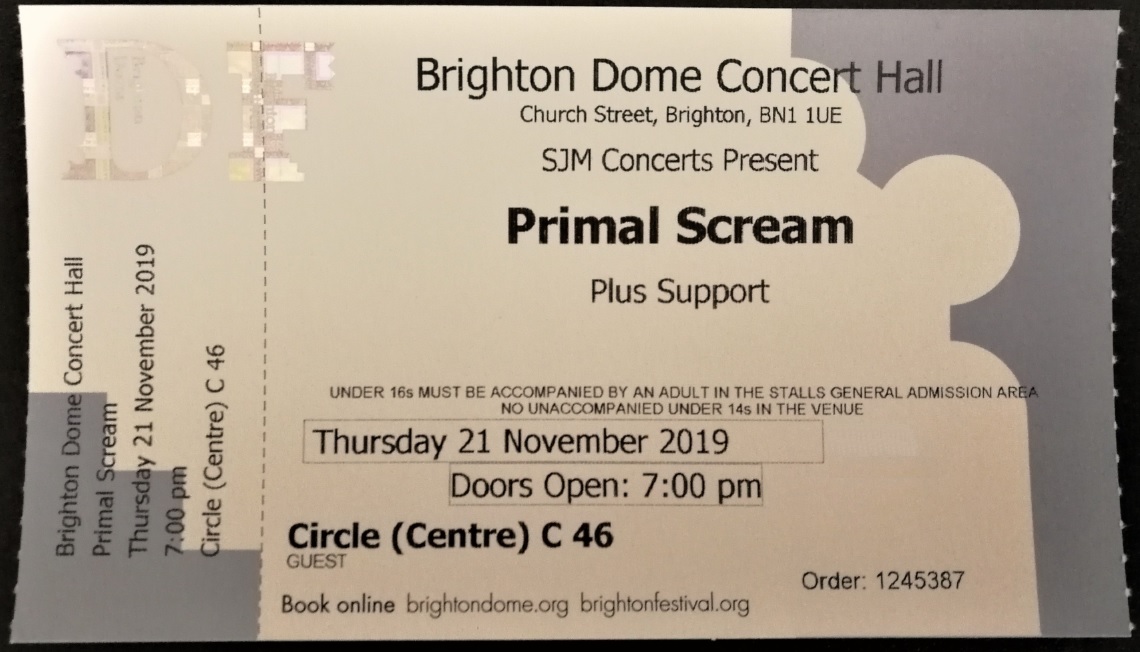 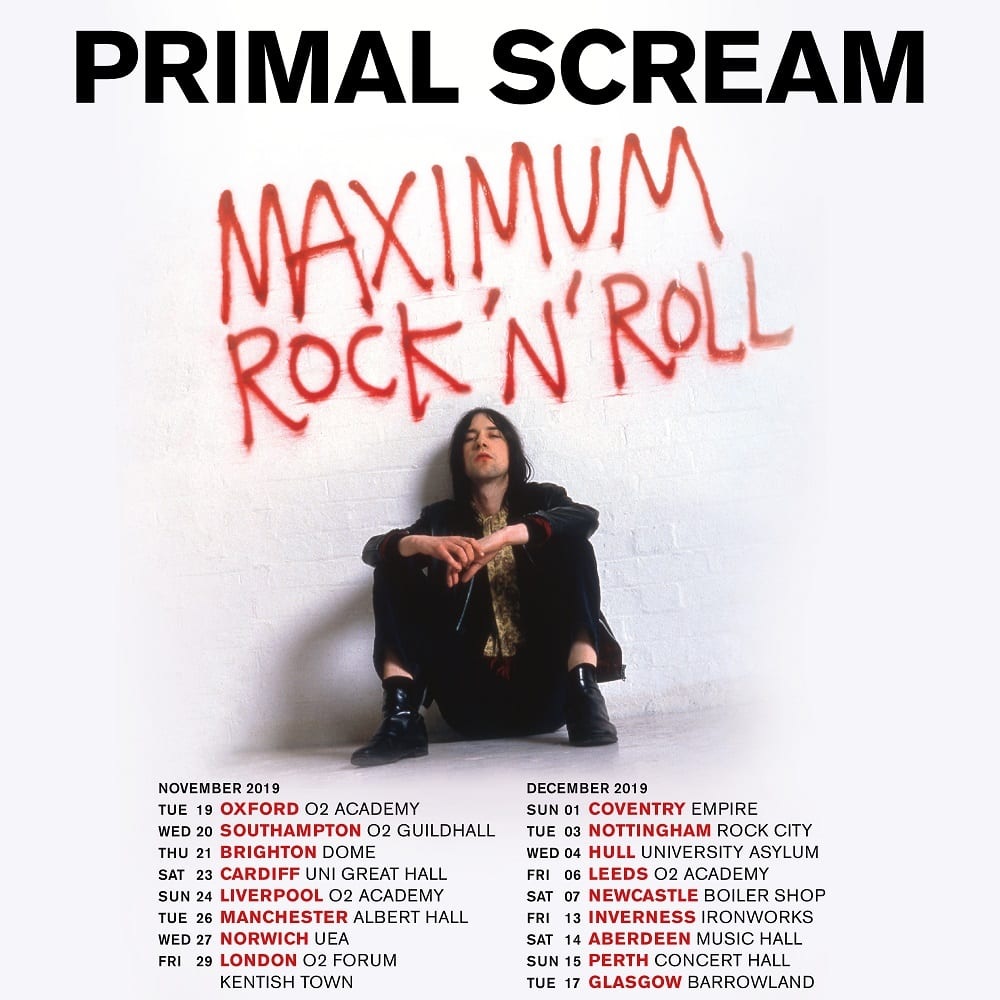