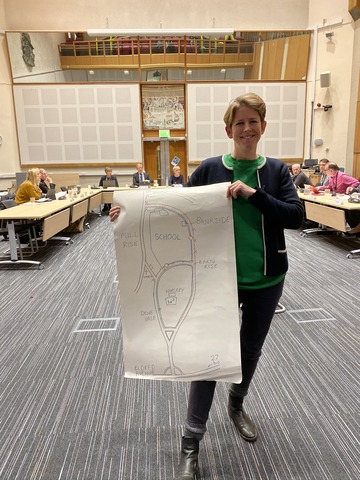 Parents fearing for their children’s safety have asked for a ban on cars outside their school.

Mum Sarah Kingdom spoke on behalf of parents at Westdene Primary School in Bankside, Brighton, who want to see timed “School Street” closures as pioneered by Hackney Council in London.

In Hackney, streets around a school temporarily become pedestrian and cycles only at set times in the morning and afternoon.

Vehicles are not permitted to enter the street between these times unless they have been granted an exemption, such as for residents and blue badge holders.

Mrs Kingdom’s deputation on behalf of Westdene School parents went before Brighton and Hove City Council’s Environment, Transport and Sustainability Committee on Tuesday 26 November, calling for closures was well received by councillors from all parties.

The school is encircled by Dene Vale, Mill Rise and Bankside, which are only wide enough for one car to pass.

Mrs Kingdom described parents dropping children off at school straight out of their car, blocking the road and doors swinging out onto the pavement filled with children.

She said there had been many near misses, as children were nearly hit by cars.

Mrs Kingdom said: “There is a lot of illegal parking, a lot of cars on pavements, people blocking double yellows and so on.

“There is a lot of stress also caused by this as well as danger.

“Operation Crackdown we report to dutifully, encouragement of walking to school, it just doesn’t work.”

Parents would also like drivers dropping children to school to use the park and ride at Withdean Stadium just down the road.

Earlier this year a successful trial was carried out outside St Luke’s School in Queen’s Park Rise.

Councillor Pissaridou said: “Careful community engagement would be necessary and support from headteachers, governors, pupils, parents, councillors and residents would need to be considered.

“Some of the good work undertaken and underway includes updating travel plans and road safety interventions with the Sussex Safer Roads partnership.”

Withdean Green councillor Steve Davis told the committee there are 800 children at Westdene and 4,000 children making their way to school in in their ward every day.

He said: “As local ward councillors we have met with every head teacher in our ward representing all those schools and they are all jumping up and down at the idea of implementing such a successful and effective and most importantly affordable scheme.”

He said: “The way the delivery drivers, the parents on the school run behave is absolutely shocking.

“The yellow zig zags are merely decoration and seen as a parking space. There are people reversing down one-way streets in 4x4s.

“The catchment area for the school I believe is 1.2 miles. It is absolutely extraordinary.”

Councillor Lloyd said asking people to walk or cycle does not work but shutting off the streets would work and needed to be done now.

During further debate about safer routes to school he pointed out encouraging cycling and walking does not solve the problem of cars dominating the roads making them dangerous for pedestrians.

Conservative councillor Vanessa Brown called for a change in policy for new pedestrian crossings as she has asked for three in her Hove Park Ward on the routes to multiple schools.

Councillor Brown said: “I keep being told I cannot have them because there’s not been enough serious accidents.

“But the traffic situation has got far worse recently. I do not want to wait for a child to be hurt. We should be more proactive than reactive.”

A report into safer streets around schools is going to the committee next year.