A property developer told planners that he wanted to build a shared house in Brighton for young professionals not students.

Project manager Simon Lovering said that the owner had no intention of making the proposed five-bedroom house at Fiveways a student let.

And at Brighton Town Hall, the site’s owner, Jack Ravan, of Whylands Avenue, Worthing, was granted permission to build the shared house on an empty plot in Hythe Road, Brighton.

They were responding to concerns raised by neighbours that the HMO (house in multiple occupation) would be filled with students.

And Brighton and Hove City Council’s Planning Committee was told that permission had already been granted for a family home on the site – an option preferred by neighbours.

Mr Lovering said: “We can assure the council that this is aimed very much at the young professional.

“It has a value of £600,000. They want to take care of it themselves and have no intention of making it a student let.”

She said: “This is a very small plot. It is barely the width of two cars.

“I question the change of use, before the building has been built, when permission was given for a family home.”

Three other properties out of 75 within a 50-metre radius of the plot were already classed as HMOs.

The Planning Committee was told that this was well within the council’s limit of 10 per cent limit.

Conservative councillor Carol Theobald said that she was unhappy with the application, adding: “In my personal view it is very unusual to have 40 people object to an application.

“I would prefer to see it as a family home as it seems to me there is not much privacy.” 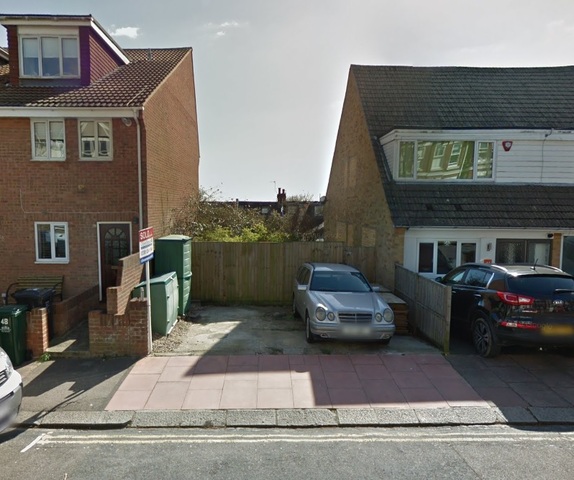 The vacant plot in Hythe Road, off Fiveways, in Brighton

Green councillor Leo Littman said: “There is not a great deal wrong with it. I would prefer a family home but it’s not my choice.

“There is an extremely small amount of shared space for five people.”

Labour councillor Daniel Yates said that the plan was of a “higher quality” than some of the shared homes that had been approved in other parts of Brighton.

The Planning Committee granted permission for the proposal but said that it would have to be “car-free”. Future occupants would not be able to apply for a parking permit in the area.