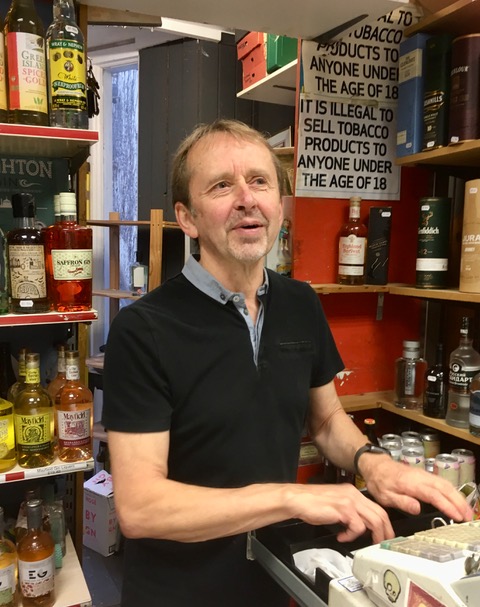 Steve Foster and his wife Sarah ran Trafalgar Wines in Trafalgar Street for 36 years until they closed the business in October and moved to Patcham. They have many happy memories but Steve also recalls times which were difficult, even dangerous, demanding a cool head and all his powers of persuasion, as Kathy Spencer reports.

Over the many years Steve Foster was owner of North Laine off-licence Trafalgar Wines, he experienced some dramatic incidents including two knife hold-ups and one gun hold-up in the 1990s.

“I remember a masked man pointing the gun at me, I ducked and he hit me on the head with it and I had to be treated in hospital. I knew who it was – I had banned him the day before. There was no CCTV in those days.

“There was a time when it was a bit like the Wild West round here, partly linked to the former garden with a bench just over the road on the corner of Whitecross Street.” The small garden used to be tended by North Laine Community Association members but became a magnet for dealers and street drinkers.

“I used to say the North Laine garden went up and 25 winos sat down – and then didn’t move for five years. It got very rough. I would try to ban them but if they didn’t go to me they would just go to the (former) Unwins off-licence down the road.” These were the days before newsagents and supermarkets widely sold alcohol as they do now. 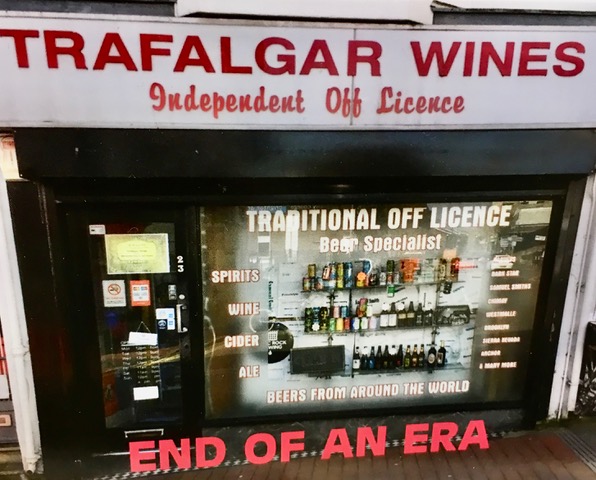 It is fair to say that Steve and wife Sarah, running a town centre off-licence just down from the station, had to deal with their fair share of troubled customers from drunks to beggars and people with mental health problems.

Steve, who over the years coped with everyone using his trademark kindness and tact, admits: “Yes it was a bit care in the community at times. There were one or two customers who were trouble, but the thing is not to treat them with aggression and I’m not an aggressive man. It was fine as long as they were not causing any trouble.

“You learn with experience and I would just find a way to talk to them and gently guide them out of the shop. Most of my customers have been nice people and many of my regulars have been coming for years and I regard them as friends.”

The closure of “Steve’s”, as its many loyal customers knew it, marks the end of an era during which the shop became a centre of the community. It has always supported NLCA with advertising in the Runner and regularly donated prizes for social and fundraising events,

Steve, 63, who ran the business with his wife Sarah – raising two sons amid the long hours and few holidays – started out as a newly-married man in his twenties with a six-month-old baby.

The couple originally hailed from Cannock, near Wolverhampton, and Steve has never lost his laconic West Midlands accent.

He began his career as a civil servant but moved to Brighton when his parents set up home here. He decided to run a gift shop in St James’s Street, then sold it on and was considering moving to Blackpool when Trafalgar Wines came up for sale.

The Fosters lived in the two bedroom maisonette above the shop raising sons Mark and Ben, now 36 and 34. Sarah, meanwhile, combined helping out in the family business with working at St Bartholomew’s primary school
as a bursar.

What changes has he noticed over the years in North Laine? “Well it’s become more gentrified… As far as the business is concerned, the craft beer revolution certainly made a difference to us, we became quite a specialist for it and we’ve met a lot of nice people who got their craft beer specially from us.

“I even won a Best Bottle Shop in East Sussex award so I was quite proud of that – and I got into organic and New World wines. When I first opened, the market was more for Blue Nun and Liebfraumilch.”

Customers might also remember the pets who had the run of the shop over the years – such as ginger tomcat Percy who prompted a customer complaint to the council over his habit of sitting on top of beer cans. Then there was Maine Coon cat Alice, Max the Westie dog and, more recently, ginger and white cat Whisky and their Jack Russell, Daisy.

Steve says what he will miss most about the shop is his friendly regulars. “I’ve always felt very much part of North Laine and the community,” he adds.

But he’s looking forward to not having to work long hours and maybe taking a few holidays – something he’s not been able to do for the last eight years, explaining “I’ve done my time.”

Steve will also be missed by his customers who flooded Trafalgar Wines’ Facebook site with tributes. After it closed a farewell party was hosted in the Fosters’ honour by Mark Erickson and Sara Bragg of Tidy Street.

This article first appeared in the North Laine Runner