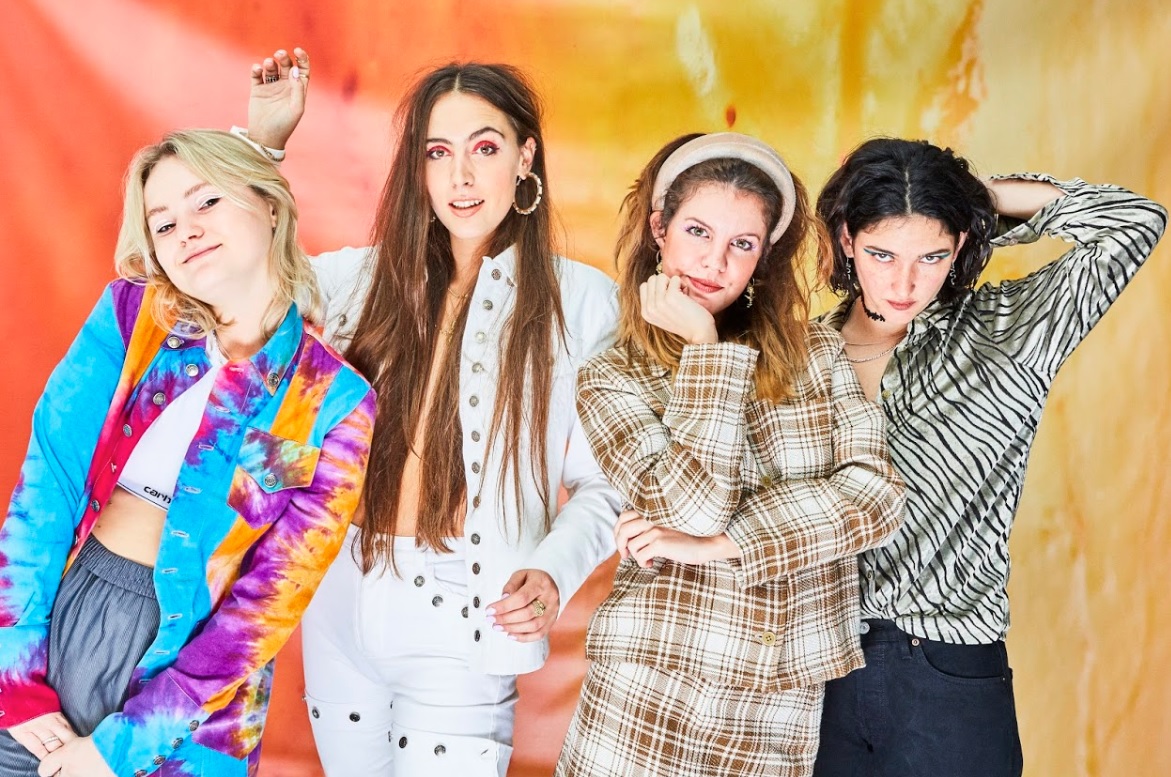 Hinds are coming to Brighton! (pic Andrea Savall) (click on pic to enlarge!)

Madrid 4-piece Hinds got together back in 2011 as a bedroom duo called Deers, which consisted of cheeky Carlotta Cosials (vocals, guitar) and sassy Ana Perrote (vocals, guitar). Before long they had recruited Ade Martin (bass, backing vocals) and Dutch born Amber Grimbergen (drums).

I picked up on them in 2014 when they had released just 4 songs on Bandcamp (‘Bamboo’, ‘Trippy Gum’, ‘Castigadas en el Granero’ and ‘Between Cans’) and I really loved what they were doing. However, confusion set in as Deers had to change their name due to another artist of the same name and so being girls, they opted for the female deer moniker of Hinds and have never looked back. I don’t think that there is any point in comparing these ladies to any other artists as to me they are unique and loadsa fun!

Hinds first played live in Brighton on 23rd January 2015 at The Joker situated immediately opposite Brighton Fire Station. They returned on 25th February 2016, when they took Patterns by storm and then blew the house off the Concorde 2 on 20th April 2018 – read our review HERE. 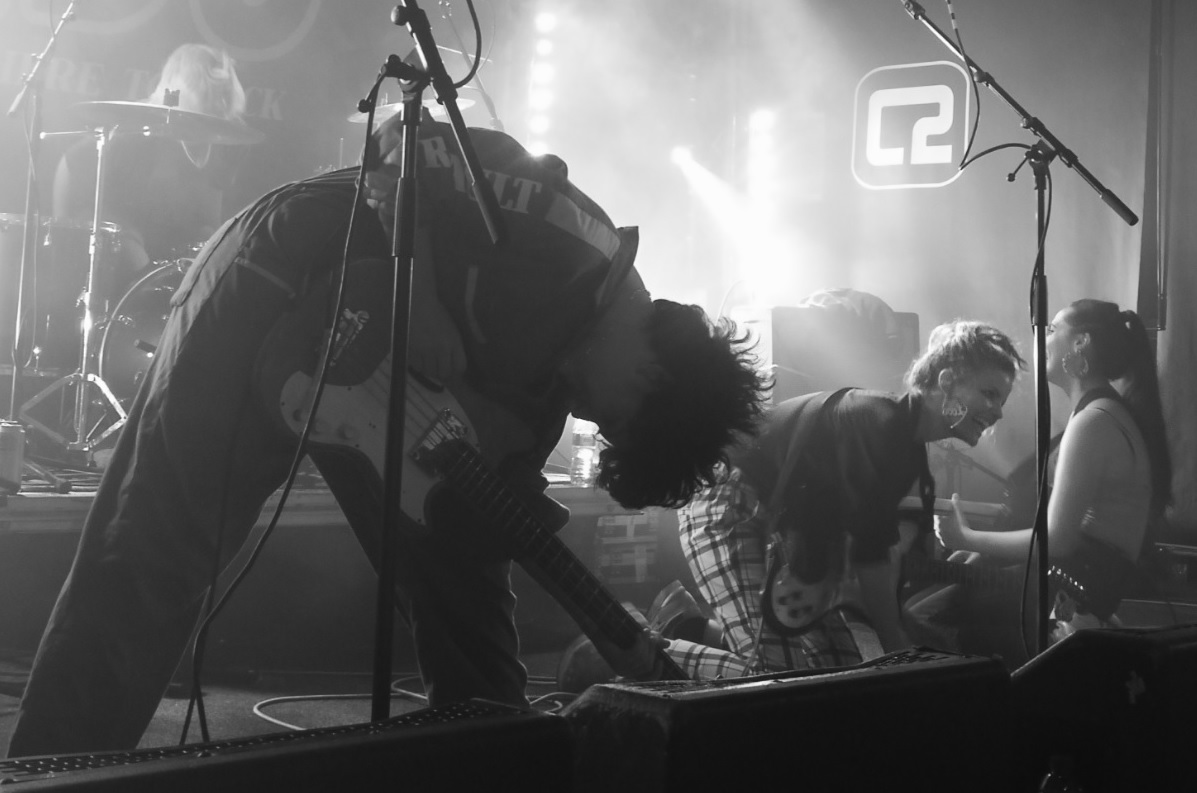 Hinds at the Concorde 2, Brighton 2018 (pic Nick Linazasoro) (click on pic to enlarge!)

They are now set to make a welcome return, when they will be performing on Monday 13th April 2020 at CHALK, in support of their forthcoming hugely anticipated third album. As a teaser they have released ‘Riding Solo’, a raucously energising first bite from their forthcoming platter. Produced by Jenn Decilveo (Bat for Lashes, Anne-Marie) in New York, the new track stays true to Hinds’ brazen attitude, but spins it off into a bold, brave new direction for the band, complete with gloriously distorted vocals and ridiculously infectious choruses with delicious echoes of ‘Paper Planes’.

This tantalising first track points to a thrillingly diverse third album, but at heart, the band
remain true to themselves, writing deeply personal lyrics about their trials and tribulations that somehow manage to sound universal as well.

“Feeling lonely is one of the most common human feelings, right ? Well, being a musician doesn’t really help. Your whole life is constantly moving and the only thing that remains is yourself. And dealing with yourself, oh gosh, we all know how boring and angering that can be. ‘Riding Solo’ is about this. About us. Perpetually on the move, being everywhere and nowhere at the same time. Surrounded by strangers most time of the day, being 9 hours time difference from our people and what we call home, living and dying por y para la música”

Watch the beautifully choreographed, desert-shot video directed by Keane Shaw HERE, which oozes style and bravado in equal measure. You can also buy/stream/listen to the track HERE.

With two acclaimed albums behind them, ‘Leave Me Alone’ and ‘I Don’t Run’ racking up
50 million streams worldwide, Hinds have gained global recognition for their emotional
openness and unapologetically anarchic ways with their honest, fun, charming music
always at the forefront. Hinds love to party, playing as hard as they work and never fail to bring all that energy on stage which has led them to play over 500+ shows all over the world including slots at Glastonbury, Primavera Sound, Pitchfork Paris and Fuji Rock Festival. 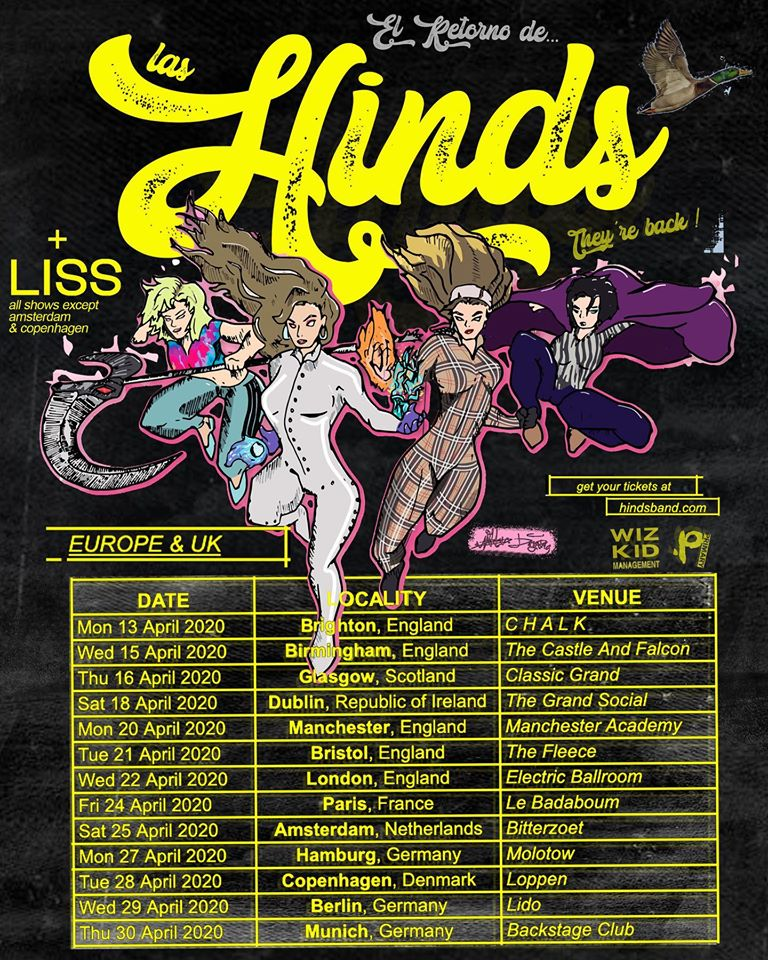