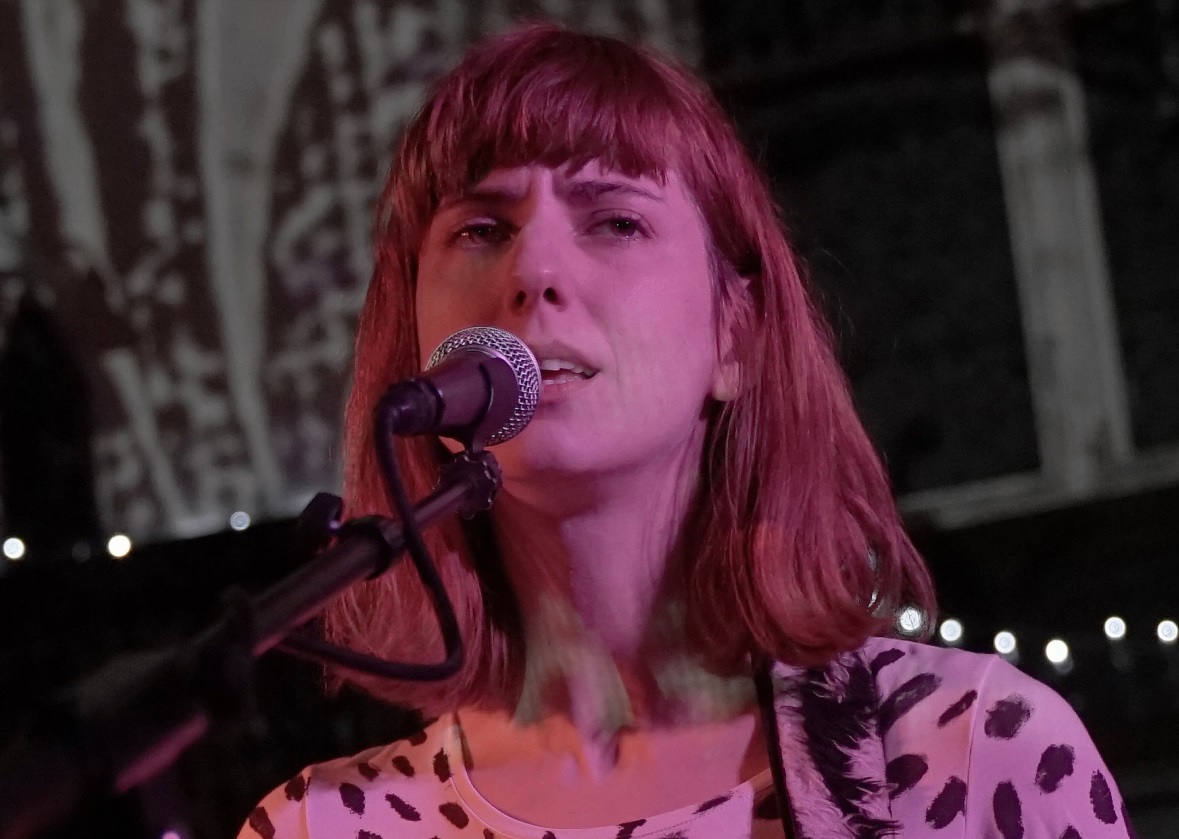 This evening, the dearly beloved were gathered in a packed congregation within the hidden Westgate Chapel, which is located relatively close to Lewes Castle at the top of the High Street.

The Grade II* listed chapel was constructed in 1583 and converted 1698, and then altered and restored in the 19th century, so clearly we were in a fine building for the opening night of the two day Lewes Psychedelic Festival, which is organised by the Brighton based Melting Vinyl promoters each year.

This evening is a taster event for around 70 lucky souls, prior to the main push tomorrow down nearby Lewes Railway Station at the All Saints Centre, where the sold out crowd will be witnessing sets from TVAM, Japanese Television, Pye Corner Audio, Oh Mama, and Holy Magick. 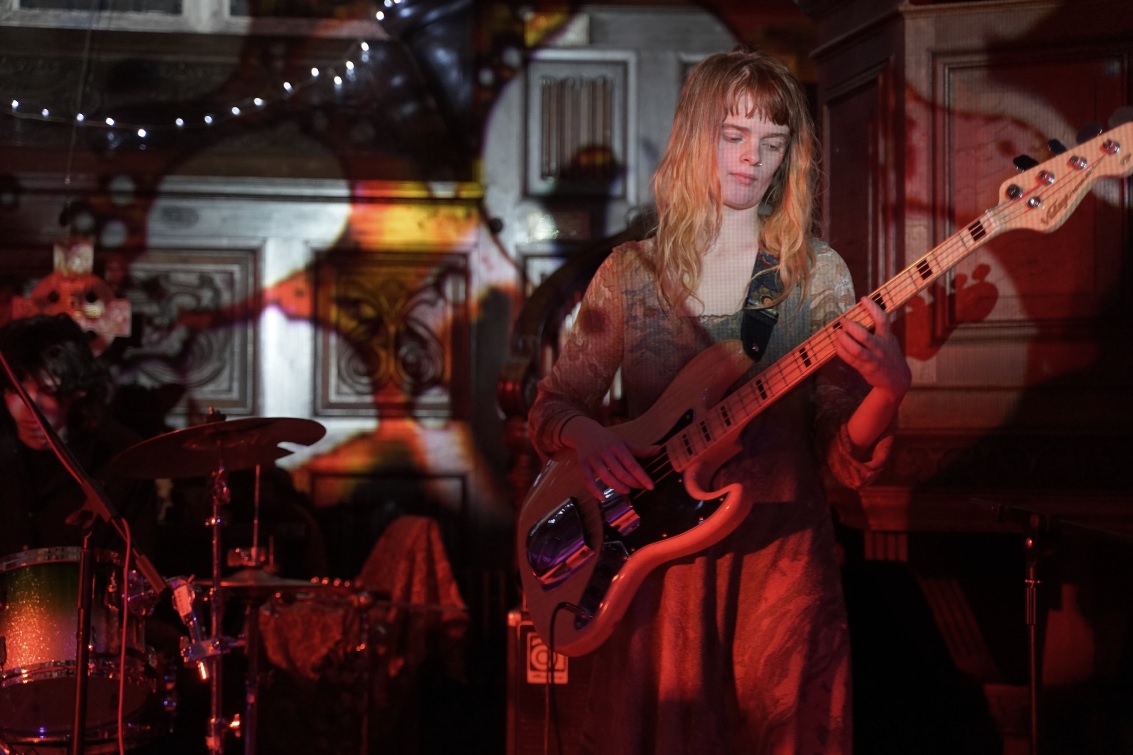 Our building this evening is known as Westgate (Tom Paine’s Chapel) and is run by volunteers and is most certainly a hidden gem which offers the perfect acoustics for such an event as the annual Lewes Psychedelic Festival.

Tonight, the chapel was displaying hymn numbers 194, 181, 35 and 201, but this most certainly was not the setlist for those gathered. It was a more modern affair. But when I say, more modern, I’m in fact mainly referring to sounds akin to those first heard circa 1970, but those that had tuned in, turned on and possibly dropped out.

On offer this evening we had Vanishing Twin, Wax Machine and Sleeping Creatures. We pulled up a pew and absorbed ourselves within the wonderful psychedelic world, which was visually assisted by local visual arts team of Innerstrings who are co-promoters of the event along with Melting Vinyl. International visual artists, Innerstrings, bathed the interior of Westgate Chapel in a bath of swirling liquid light, not unlike being in a giant lava lamp. We were set to go…..

Historically the Lewes Psych Fest has a founded reputation for bringing together a wide variety of acts under the psych umbrella, and has always sold out of tickets well in advance. Suffice to stay the 2020 event has again maxxed out on capacity. 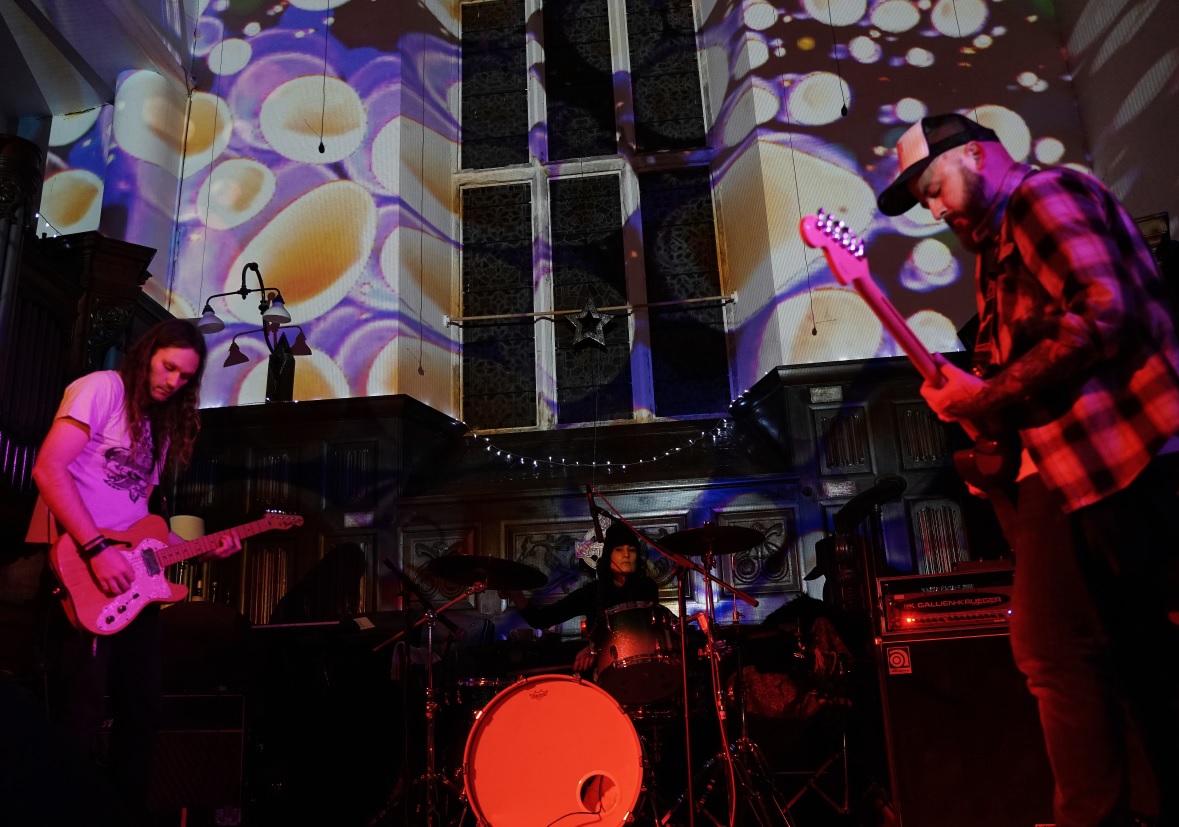 First up this evening were Sleeping Creatures who are based in Brighton. They commenced their 35 minute set bang on time. The trio consists of Richard Allwood guitar, Sean Michael Cox guitar, and Jennie Howell drums. There are no vocals during this performance, just echoey, floaty improvisation with occasional distortion thrown into the mix.

The soundscapes ambled along and the Innerstrings projections were certainly doing their job and certain sections of the crowd closed their eyes and were whisked away to the happy world of 1970. 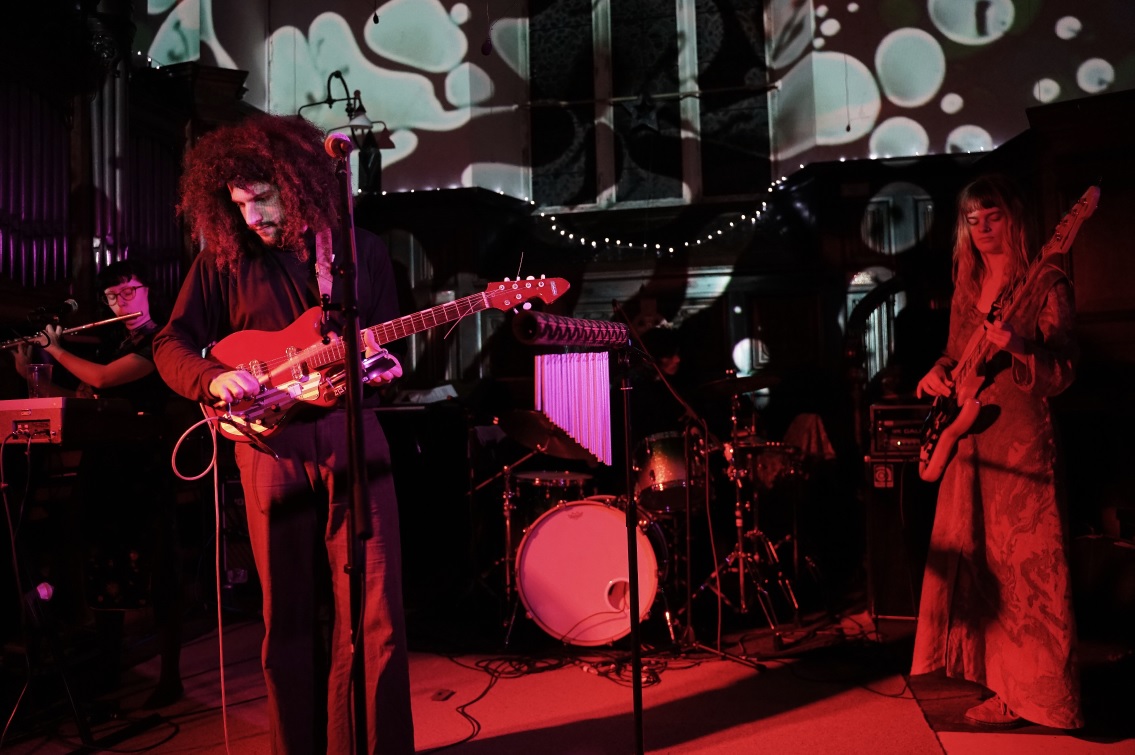 Next up were Brighton’s very own psychedelic time-warp specialists Wax Machine, who commenced their 33 minute set five minutes early at 8:55pm.

Here is a two boy, two girl band that are clearly sporting the ‘children of the sun’ look that no-one ever sports anymore. Surely some of their garments are originals, they look that convincing, especially their bass player! Why aren’t they based in Woodstock or Glastonbury you may ask? Simple, Brighton’s THE place to be musically!

Accompanying their retro hippy look is their music which includes chimes and flute and certainly had a nod to the early prog sound drenched in spiritual jazz. It reminded me of an old black and white 1970 video I watched years ago of very early Kraftwerk on a TV show with the kids sitting on the floor grooving out. If NEU! and the first two Kraftwerk albums, (the ‘forgotten’ ones with the red and green traffic cone covers) are you bag, then you will be contented to watch Wax Machine all day long. Clearly folk roots Krautrock is a big thing in their houses. We were read the sermon from the vocalist little black book and the congregation enjoyed it.

You can catch them live in Brighton at their forthcoming ‘Earthsong Of Silence’ album launch up at The Hope & Ruin on Saturday 21st March – tickets HERE. 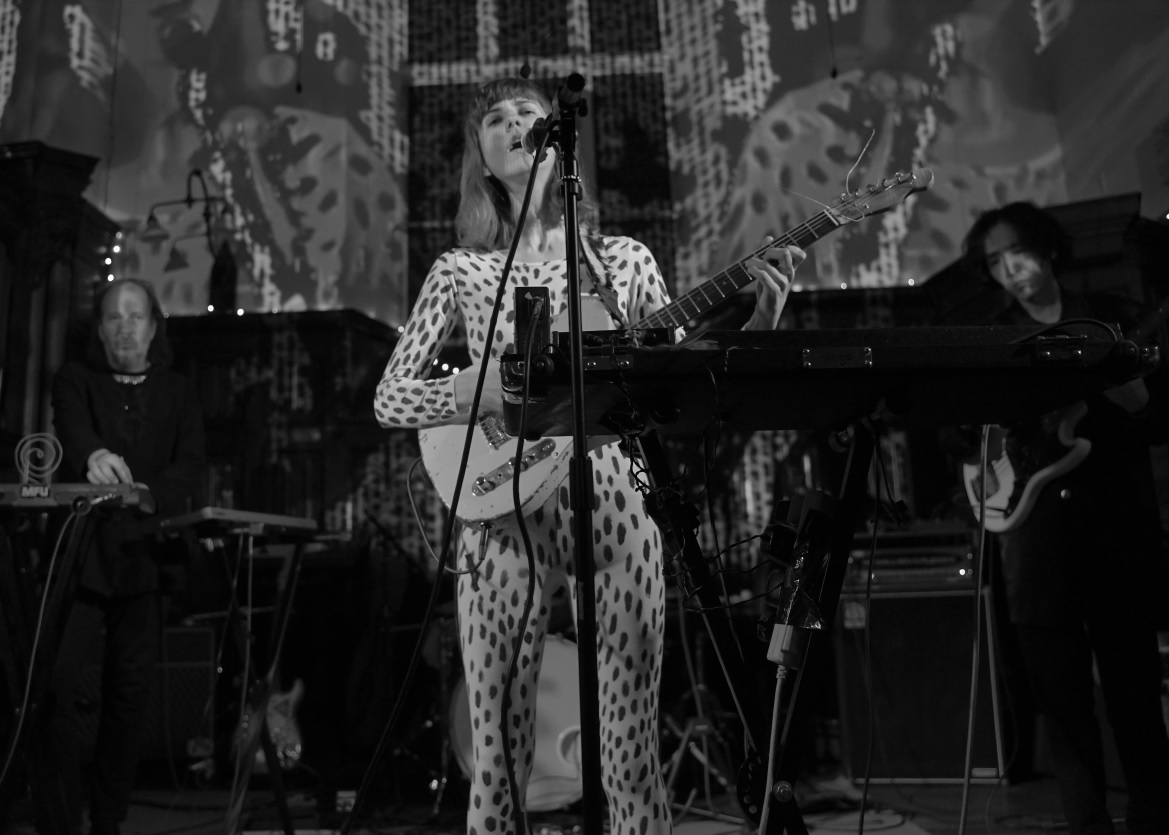 Heading the bill this evening were Vanishing Twin who formed in 2015 and were making a welcome return to Lewes Psych Fest. They got their set underway six minutes early at 9:54pm, and met the 11pm curfew, by concluding 53 minutes later at 10:47pm. This must have met the approval of those rushing to get public transport after an entertaining evening.

Their Facebook page lists five band members, namely Cathy Lucas, Valentina Magaletti, Elliott Arndt, Phil MFU, Susumu Mukai, however, there were only 4 in attendance at the front this evening. We had for one night only Cedric sitting in on drums instead of Valentina. The band members may come from Japan, Italy, France and America, but they have all made England their home. Thus we get a fine combination of sounds delivered as one complete unit.

I most certainly have to flag up that it was well worth venturing out on a cold January night simply for the four minutes of wonderful dreamy escapist joy that is the song ‘Magician’s Success’ which is found on the latest album ‘The Age Of Immunology’. It was introduced by a barefooted Cathy with a whisper as “a pop song for you”. Sitting there, I was astounded as to how this track was not a long lost song from Broadcast or even Slowdive, Saint Etienne or Stereolab. No wonder Natasha Youngs co-owner of Brighton’s Resident music was in attendance! You can always find Broadcast albums still in stock in her shop!

For Vanishing Twin, there was dancing in the main aisle to their occasional early Kraftwerk style motorik beat. I had earlier observed a small passage within one of their compositions that most certainly reminded me of Gary Numan’s ‘Cry The Clock Said’, which was most pleasant indeed.

They are clearly an experimental lot and draw on sounds outside of the usual pop vocabulary, aided by the use of obscure drum machines, home-made electronics, and the like. Thus invoking the esoteric psychedelia of lost soundtracks, radiophonic experiments and minimal music orchestras.

Here is a band that I would enjoy seeing perform live again. 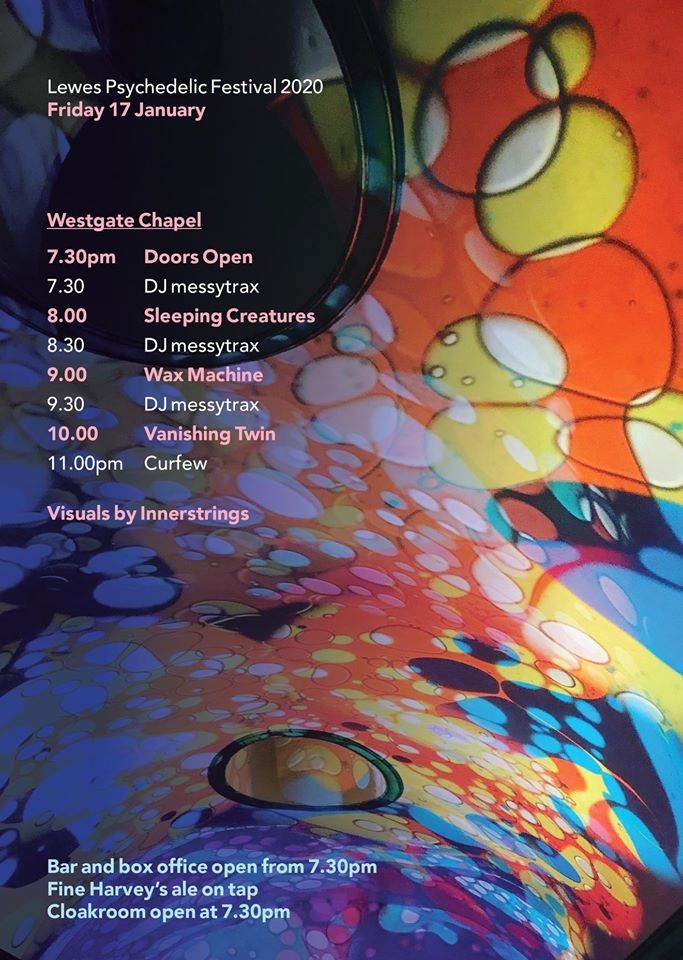