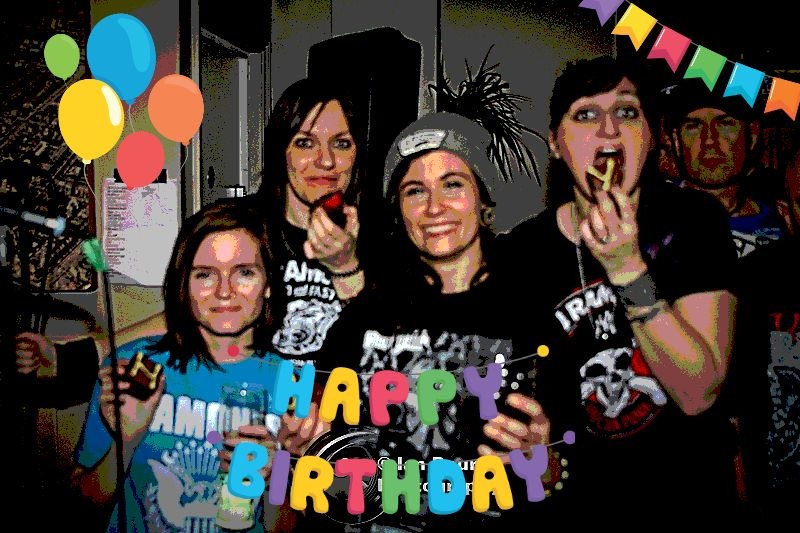 An acoustic night had been planned out in Worthing to mark the band member’s birthdays, you see they all fall in January. This had been in the planning stages when I last spent a few hours in the company of these guys, and that was at The Hope and Ruin I think. Well, tonight’s the night as they say. It happened to be the first gig of 2020 for The Ramonas.

The Egremont pub (located at 32 Brighton Road, Worthing) was well and truly packed. The crowd generating their own steam heat well before The Ramonas appeared. I noted Cockwomble members were out, including Victoria as she is in Cockwomble and the Ramonas! I saw members of Strange Brew in attendance and also the Sussex UK Subs tribute band, Crash Course. A lot of regular faces seen at Ramonas gigs were there tonight in force to help along all the birthday celebrations. 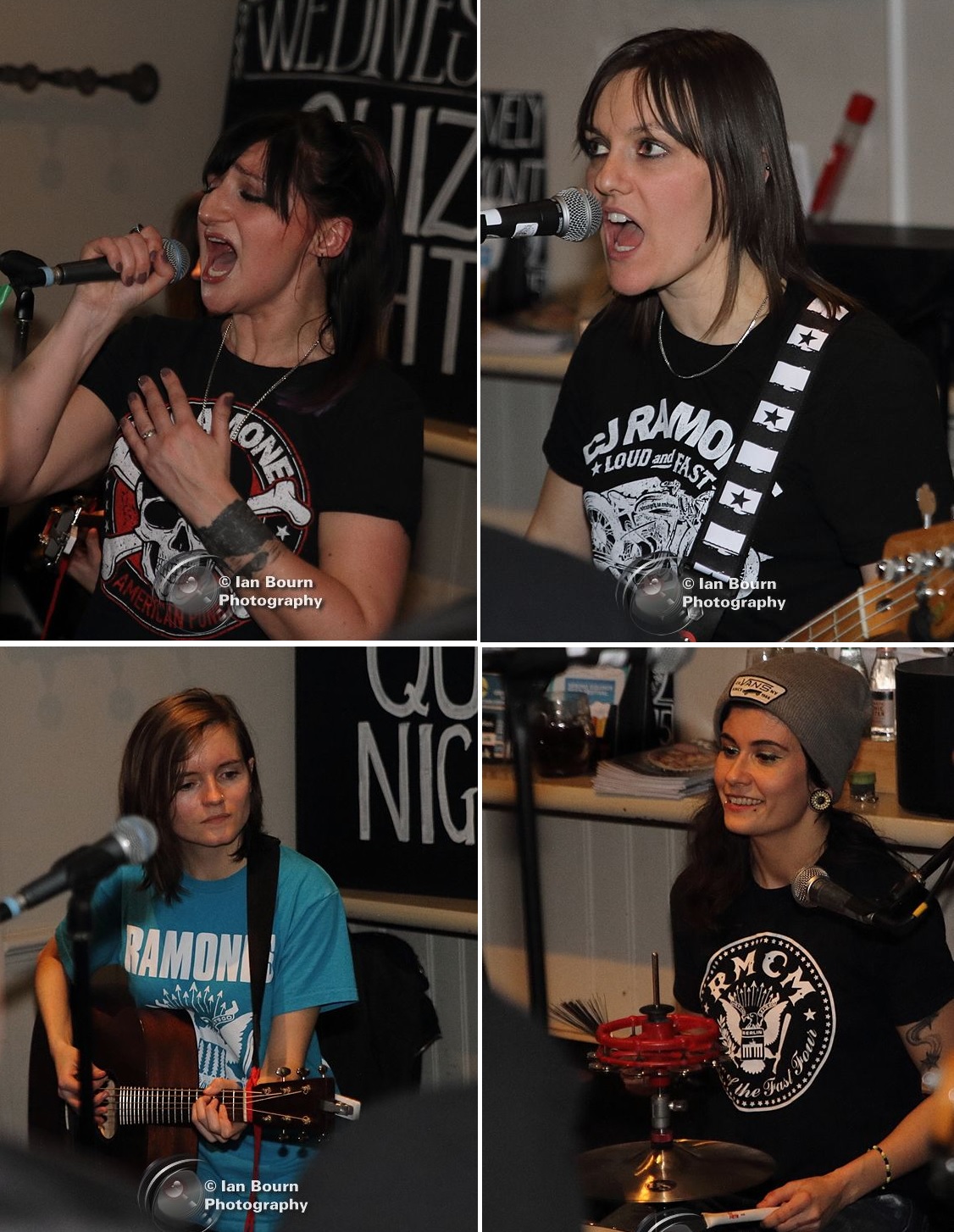 The Ramonas live at The Egremont, Worthing 17.01.20 (pics Ian Bourn Photography) (click on pics to enlarge!)

The Ramonas took to the “stage” bang on time and were greeted warmly from the gathered crowd. The set opened up with ‘Glad To See You Go’ and ‘Oh Oh I Love Her So’ and ‘I Wanna Be Your Boyfriend’. It is odd hearing Ramones material presented in this way. It is all very subdued and almost calm. The songs all sounded kind of different but in a refreshingly good way. A couple of self penned tunes followed from the Ramonas album with ‘Cotton Wool’ and ‘Sue Me’. Maxine’s acoustic guitar had been turned up after the first couple of songs and now the Ramonas were cooking on gas!

A Ramonas gig is usually very loud and fast. It was a delight to hear the sometimes missed harmonies that they can produce. It really was vocal perfection at times. It was a joy to hear Maxine’s extraordinary guitar playing and to be able to pick out Victoria’s bass playing. Cammy is a force of nature and even with a stripped back kit and a cajon you just knew she was there, a raw rhythmic backing. She was hunkered down giving it everything.

The guys had spent the day before the gig in the studios finalising the recording of a new album. We were treated to a few of those new songs tonight. The Ramonas can write a belting good song! One stand out new track was ‘Broke’, which was quite late in the set. Now if you got The Ramones, The Ramonas and Lulu (OK, the Isley Brothers) to sit down and write a new 2020 ‘Shout’, then this would be it! It was a fabulous song, even in a stripped back format, it rocked.

Other stand out moments included ‘Poison Heart’ and Lisa poured her heart into that one. The always brilliant live ‘Daily Fail’. Even UK Subs frontman Charlie Harper was given a mention as the band fired up ‘Tearaway’.

This was a fabulous evening of crowd participation “Hey Ho Lets Go” as Ramones classics were covered, Ramonas songs were tucked in there including some new material.

The end of the evening was a request slot and I have to say the Ramonas cover of ‘Chinese Rocks’ was something else.

Bottles of Prosecco were opened and cake was handed to the Ramonas along to a rousing Happy Birthday. This was a truly fun night.

Chatting afterwards they all said how much fun these acoustic sets were. They had done two, one at Rebellion, and I had been present at the other. They quite fancied doing more. Fingers crossed on that and put me down for a ticket.

For more information on the Ramonas visit: www.ramonas.co.uk and www.facebook.com/ramonasuk. 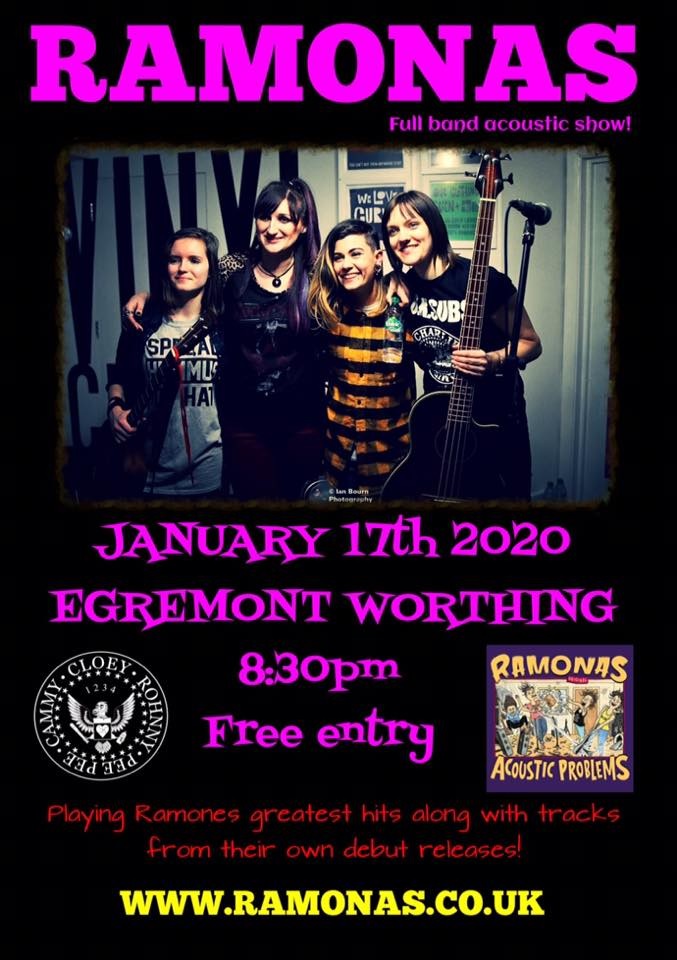