Brighton and Hove have offered a three-and-a-half-year contract to loan signing Aaron Mooy. 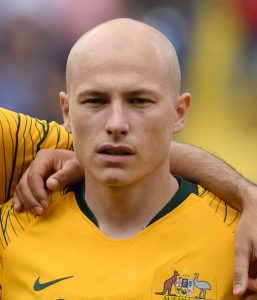 The 29-year-old Australian international is joining Albion in a move reported to be worth £5 million.

“The Australian international has signed a three-and-a-half year contract after impressing during an initial loan spell during the first half of the season.”

Head coach Graham Potter said: “We are delighted to have agreed a permanent deal with Aaron and Huddersfield.

“He’s been an important player for us and will have a key part to play going forward.

“We knew what Aaron would bring and he’s proved to be an excellent addition to our squad and a great professional both on and off the pitch.”

Albion said: “Mooy was born in Sydney and initially moved to England and Bolton Wanderers in 2006, joining their academy as a teenager.

“After two years with Bolton, at 18 he left to join SPL side St Mirren to play senior football.

“After two seasons in Scotland, a four-year spell back in Australia followed. That saw stints with Western Sydney Wanderers and Manchester City’s sister club Melbourne City.

“His form at the latter saw him win the Australian PFA Player of the Year. That prompted a move to England and to the Etihad to join City in 2016.

“He was immediately loaned to Huddersfield and in his first season helped the Terriers win promotion to the Premier League – alongside Albion – and was named in the PFA and EFL Championship teams of the season.

“That prompted Huddersfield to make the move permanent and Mooy was Town’s standout performer during their two-year stay in the top flight.”

They were reported to have made donations already through the Australian PFA – and Albion said that the club would match the $30,000 donations made by the pair.