A man from Hove has been jailed for carrying out an armed robbery at knifepoint. 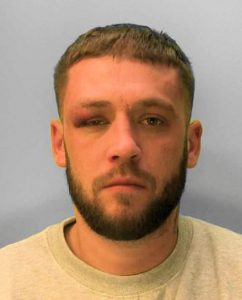 James Creaghan, 29, of Marlborough Court, The Drive, Hove, was sentenced to 40 months in prison for holding up Connaught Leisure, in George Street, Hove.

Creaghan admitted robbery and having a knife in public when he appeared before Judge Jeremy Gold at Hove Crown Court.

Sussex Police said: “A man has been jailed for carrying out a knifepoint robbery at an arcade in Hove.

“James Creaghan, 29, of The Drive, Hove, was charged with robbery and possession of a bladed article in a public place following the incident at Connaught Leisure on Tuesday 14 January.

“Creaghan was seen by members of the public to drop a large kitchen knife in George Street before picking it up and concealing it as he headed inside the arcade around 3.20pm.

“He produced the knife and demanded money from a member of staff inside the business.

“Creaghan left with a quantity of cash in a carrier bag but was seen by witnesses to drop some of the money as he left the arcade and headed toward Blatchington Road.

“The staff member was unhurt by very shaken by the ordeal.

“Officers attended the business and identified Creaghan as the suspect from CCTV footage.

“They executed a warrant at his address on Wednesday 15 January and he was arrested and charged with the offences.

“Clothing matching that worn by the suspect in the CCTV footage was found in the communal bins behind Creaghan’s address, including a red sock with the toe cut out that he’d used to cover distinctive hand tattoos.”

Judge Gold jailed him for 40 months for the robbery and six months – to run concurrently – for having a knife in public, making 40 months in total.