The rules around social distancing in response to the coronavirus pandemic seem to have inspired some of our councillors to lead the way in the new practice of “lockdown shaming”.

A few have been a little too eager to warn about a creeping “holiday atmosphere” and the risks posed by crowds descending on the city’s seafront.

There have even been headlines about “Coronavirus Brighton” and “Rowdy parties at holiday flats”, and talk of involving the police and trading standards.

In one report we were told that holiday let landlords continue to accommodate tourists and weekenders despite the lockdown.

In another report a much more specific accusation was levelled at short-stay Airbnb lettings agency Airhost For You.

One councillor appears to have been the source of both stories, claiming that “residents feel these properties are being used for parties by people coming down to Brighton to take a holiday”.

He added: “Property owners should not be letting out flats or rooms to tourists during the coronavirus lockdown.”

I was puzzled. Nothing in either news story substantiated the claims although in the second story there was what was meant to be a self-incriminating tweet from Airhost.

It said: “What better place to be in lockdown? Beach views and seaside walks for daily exercise. And the sea looks so inviting right now.”

But in adjacent tweets Airhost made its position clear. It was taking bookings only from NHS and other frontline covid emergency key workers – or travellers, students or migrant workers caught here when the lockdown began.

Pulled out of context, you might feel the tweet looked a little off-message. We might even wonder if it tips a wink to “outsiders” who might fancy faking their NHS ID (not easy) and taking a sneaky trip to the seaside for a “rowdy party”.

But if our councillors are in possession of hard evidence of lettings agencies and property owners smuggling in tourists, they’re not telling us about it.

So I remain puzzled. Early in the lockdown, Airbnb UK (and across the world) effectively closed for business.

It gave over its platform as a means to offer emergency accommodation to NHS workers and alike – either discounted or free. This is Airhost’s only business. I would be amazed if its profits weren’t dwindling. 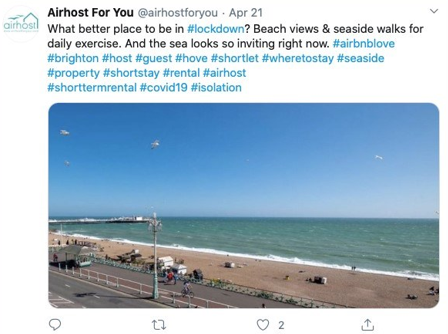 Airhost is not the wrongdoer in this troubling situation, despite being falsely damned as “frankly disgusting” – guilty by tweet.

It’s those whose misplaced virtue-signalling on a breeze of moral outrage have prejudged a business for “trying to entice people who aren’t key workers to simply book holidays in our city in flagrant breach of the current restrictions”.

I’ll apologise if I’m wrong but the evidence suggests that someone clearly jumped the gun. The eagerness to presume guilt reveals bad faith with words and actions that harm others and reveal, frankly, prejudice.

Did any of our councillors try to investigate the rumours with a view to resolving community tensions? There is no sign of that.

Instead, as a trusted public official, the only service provided to “worried” residents was to call the police so that they don’t have to.

Tantamount to a “prejudice superspreader”, one councillor shared their outrage with the media.

Harmless? Before the lockdown, residents in Cumbria became worried that tourists were flooding in to holiday lets and second homes. Already fearful, their worries were understandable. Politicians and media simply played to the fears.

And then, a few weeks ago, a few locals resorted to vigilante action. In a case of mistaken identity, a nurse who had self-isolated in a friend’s holiday home had her tyres slashed. Elsewhere in the county, “Go home” has been dubbed on car windscreens. 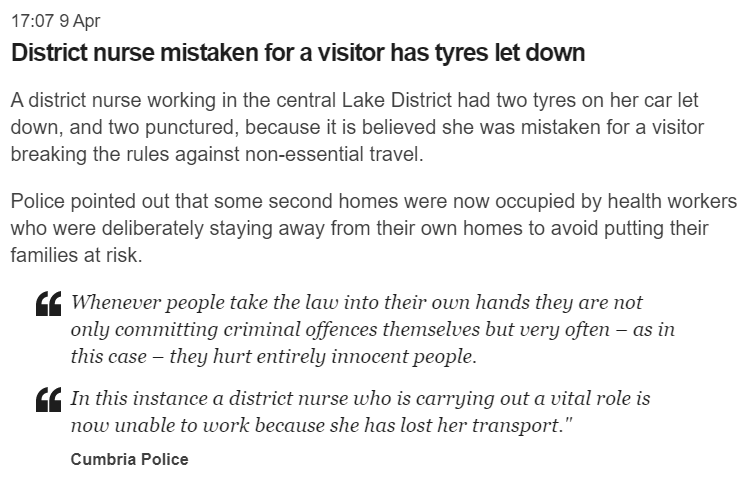 A BBC report from April

Well intended? Those who tried to “lockdown shame” Airhost – and others who applauded them – would never view themselves as prejudiced and certainly not inciters of abuse or vigilante behaviour.

Under one of the stories in question there was a comment from Airhost insisting that the business is innocent of the damning accusations. Under that another commenter wrote “scum”.

On Twitter, a Brightonian who read the article and trusted its veracity, vilified Airhost, ending a tweet with #shameless #moneygrabbing #irresponsible #careless #thoughtless.

To his credit, this tweeter soon realised the lack of evidence and the risk of encouraging a twitch hunt. He later tweeted: “Apologies about that.”

What to make of it all? We should be free to speak – speak out of turn even – but most of us wouldn’t expect a councillor to lead the pitchfork mob.

Our councillors are trusted to act diligently, resist vanity and definitely avoid engineering a trial by media. 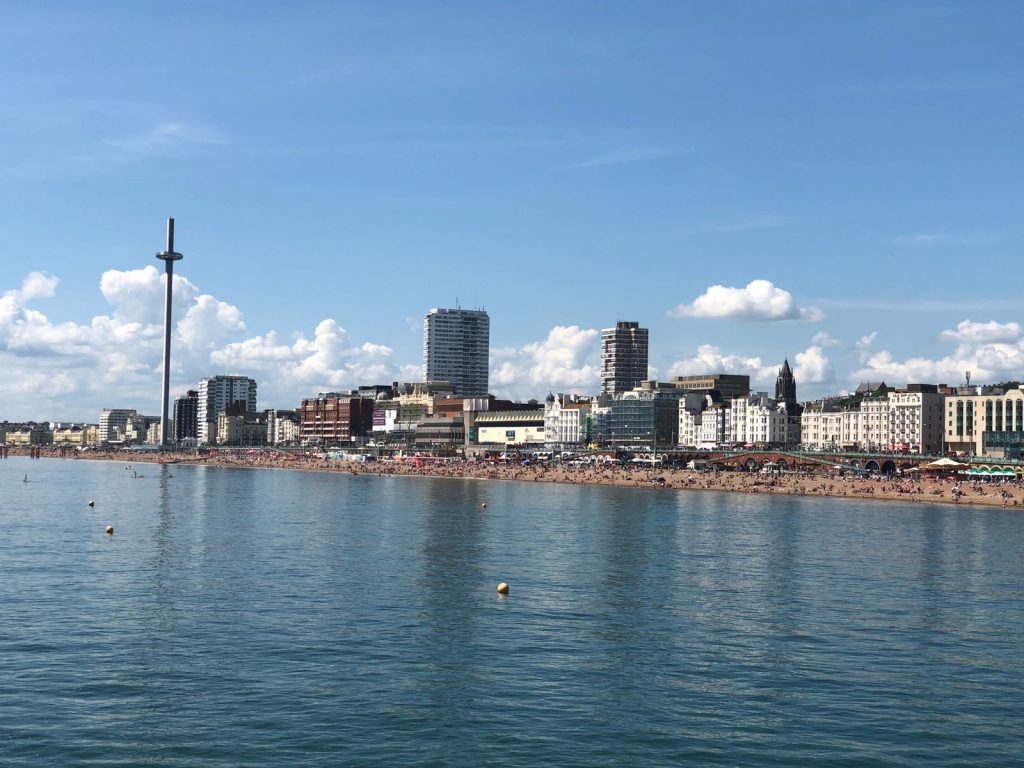 If a councillor damns Airhost for risking public health to turn a profit, then others may well assume that his judgments are sound.

With epithets like “disgusting” issued by an elected official, we might imagine that the money-grabbing capitalists at Airhost ought to be punished, right?

Let’s punish their clients too! How dare they! Who are these people anyway? We know their sort.

And yet it’s not hard to find out the facts. Although I used to rent a floor in my family home as an Airbnb space, I have had no dealings with the three people who run Airhost For You.

I understand that the operations manager Ivan Caglioni is from Italy and supervisor Raul Robaina is from Spain.

I don’t know about you but my only pre-judgment is that, coming from Italy and Spain, Ivan and Raul might be taking the covid emergency as seriously as anyone? 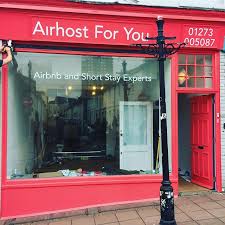 The tiny loft apartment at the top of my family house stopped being an Airbnb for weekenders and conference-goers (twice now a favourite of Labour Party conference-goers as it happens) in early March. All pre-booked guests cancelled.

My partner, my 16-year-old son and I had a chat and made a decision. The loft is safe and self-contained so we gave it to an NHS frontline worker who needed to split off from his husband to stave off infection risk.

After a 12-hour shift, he confirms that a sea view and a bit of luxury helps get him through.

It can sound like a rowdy party is in full swing if you pass our house in Carlton Hill but you need to talk to the 16-year-old about that. Who knew one kid and a PS4 hooked up to a dozen ex-year 11 Varndean kids could throw parties like this? (I’m glad they do – they need to.)

In early April we had another house meeting. Our NHS worker joined in too – on WhatsApp, despite being up in the loft. We came up with an idea.

We wanted to let other Airbnb hosts know how they could put to good use the estimated 2,000 empty Airbnb flats in Brighton and Hove – by offering free emergency stays. It was an idea that I approached my local ward councillor with. But more than a month went by without a response. 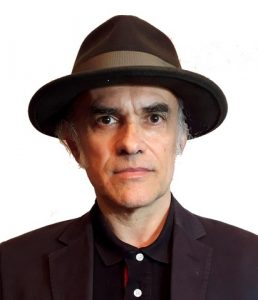 The councillor I emailed with our constructive idea to help frontline carers in a crisis was the same councillor who was so quick to try to lockdown shame a local company doing something practical in response to this pandemic.

I bombed Airbnb groups with the proposal, hoping the journalists and councillors who sometimes post would notice. I thought that they could help get the message out.

I freely admit that I have an axe to grind – the party problem we have in Brighton and Hove isn’t the rowdy knees up kind.

The Labour, Green and Conservative parties would do better if internecine squabbles, tribal warfare and political “image crafting” activities left any time for these party-focused councillors to serve their electors.

Help with intransigent officialdom and lending weight to neighbourhood problems is welcome.

Sadly, many of us don’t bother to seek their help. Too often when we do, the best we get is elected representatives acting as a passive go-between. A message service. They just remind us that our council is officer-led.

Be it lockdown renegades, party houses or anything else, if there’s a problem in the neighbourhood that we can’t resolve and it drives us to call the police or the local paper, we are far better off doing that for ourselves.