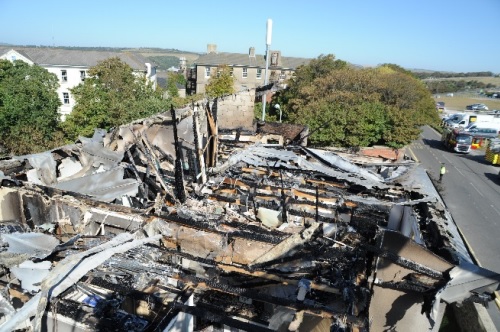 Damage to the roof of the block of flats. From South East Fire Investigation Group report

Some fire breaks were missing from the roof of a block of flats destroyed in a rapidly-spreading blaze last year.

A fire investigation report into how flames spread at the block of 12 flats in Pankhurst Avenue says it took just 17 minutes for the fire on a balcony to become visible until the roof was fully on fire.

The South East Fire Investigation Group report, released after a freedom of information request, found the fire was started by a couple of cigarettes stubbed out in a plant pot full of used butts.

After the blaze, two neighbouring blocks were evacuated because the fire service advised Guinness Partnership Housing Association, which owns the block, to make safety work.

Residents are still not allowed back because Guinness is still waiting to hear from the original developer, Geoffrey Osborne Ltd, how best to undertake the remedial work. 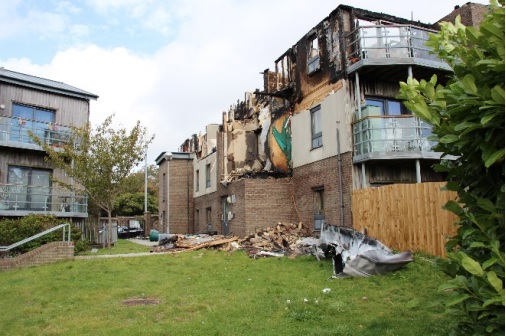 Damage to the rear of the block. From South East Fire Investigation Group report

The report said: “Reference to the timeline highlights a period of 17 minutes from the first visible effects of fire being recognisable on the balcony to a fully developed fire within the roof void.

“Regarding measures to limit fire spread, the fire stopping in the roof void did not prevent rapid horizontal fire spread throughout the structure.

“It appears flexible fire stops in the way of cavity socks were utilised, however it was noted that these were not present in some of the vertical voids and their absence could not be explained due to the extensive fire damage.

“Fire Action notices were in the communal stairwells which advised occupants to stay in their flats unless fire starts to affect their flat.

“It appears that occupants did not pay heed to this advice and evacuated immediately as they became aware of the building being involved in a fire.

“In hindsight the speed and extent of fire development showed this to be a rather fortuitous move.

“This was an accidental fire evolving from the careless discarding of a cigarette on a balcony, whereby the level of fuel loading on the balcony produced a heat flux of great enough magnitude to spread with some ease into the internal structure of the building.

The report also confirms that the balconies were partly made out of wooden decking, which the Government had advised building owners to remove as soon as possible.

The fire investigation concluded that the fire started when the two men living in the flat where the fire started put their cigarettes out in a plant pot on the balcony shortly after 4pm on September **.

They had then gone to the pub and got back at 7pm, when they played on their Xbox inside until the power went off.

One of them went to the kitchen and saw five foot high flames on the balcony, so they left the flat, alerting their immediate neighbours as they went.

The man living in the flat below first smelled smoke at about 5.45pm but couldn’t work out where it was coming from.

Another neighbour said she left the building when she heard someone shouting “Fire!” outside but didn’t hear any smoke alarms.

The report says the plant pot was half full of cigarette butts, but the remains of a plastic plant tub were also found inside, suggesting it contained organic matter.

It said when cigarettes are stubbed out into a container, they usually end up vertical, and might not be completely extinguished.

The report is dated 14 October 2019, but it wasn’t until this month that East Sussex Fire and Rescue Service announced their investigations were complete.

The Guinness Partnership said: “The report’s conclusions about the fire stops is consistent with our observations in the aftermath of the fire, as shared with residents at the time and in subsequent discussions.

“Clearly this raises questions that we are discussing with the relevant parties involved in the design and construction of the building before it was handed over to Guinness.”

Geoffrey Osborne Ltd said it would not be commenting because the precise cause of the fire remains under investigation. When Brighton and Hove News clarified that the investigation is complete, it did not respond.