A man has been jailed for eight years for raping a woman in the Wimpy in Portslade. 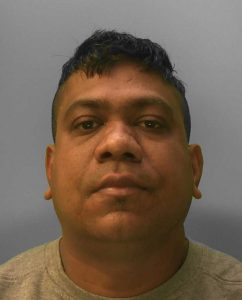 Sussex Police said today: “A man has been jailed for raping a woman Portslade.

“Peraslingam Nanthvavaraman, 40, of Sheppard Way, Portslade, appeared before Lewes Crown Court on Friday (7 August) where he was sentenced to eight years’ imprisonment.

“Police were called to the Wimpy restaurant in Boundary Road at 11.15pm on Sunday 8 March where Nanthvavaraman worked as a manager.

“A woman was found unconscious and partially clothed with bruising on her body.

“CCTV and the lights at the restaurant had been turned off prior to the attack.

“Nanthvavaraman was arrested by officers at the scene and remanded in custody.

“Traces of his DNA were found on the victim. She has received specialist support from officers throughout the investigation.

“Nanthvavaraman pleaded guilty to the offence of rape and assault causing actual bodily harm and has been jailed for eight years.”

Detective Sergeant Jemma Paterson said: “This was a horrific ordeal for the victim as Nanthvavaraman completely violated her trust in this pre-meditated assault.

“It was an extremely distressing incident for the victim and her family who had to witness some of the events that occurred that night.”

“I would like to praise the bravery of the victim following the traumatic ordeal she was subjected to.

“No one should have to be a victim of this sort of crime and we urge anyone who has been to get in contact with us.”