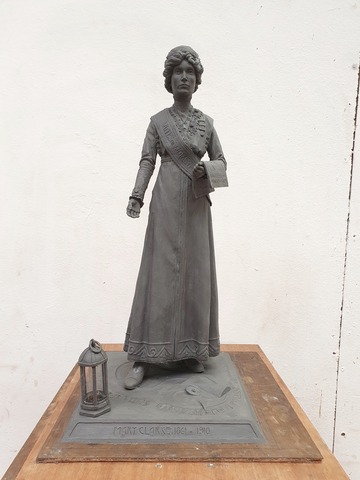 A model of a proposed statue honouring suffragette Mary Clarke has been revealed.

Sculptor Denise Dutton, created a miniature or maquette of the proposed statue of Brighton’s Women’s Social and Political Union (WSPU) organiser, thanks to £10,000 from Brighton and Hove City Council.

On Thursday 24 September, members of the Tourism, Equalities, Communities and Culture (TECC) Committee are due to discuss how the authority has supported the charity’s progress with fundraising.

The Mary Clarke Statue Appeal charity hopes to raise the final thousands and have permission to put the statue in front of Brighton Museum in the Royal Pavilion grounds.

Other options include Old Steine and New Road.

The statue shows Mary Clarke after her release from prison, where she was force-fed after going on hunger strike.

Her figure is stepping over forced-feeding equipment and holding a copy of the suffragette newspaper Votes for Women.

Mary Clarke was the first of three women who died as a result of police violence during a protest outside Parliament on 18 November 1910, known as Black Friday.

Born in Salford, she was Emmeline Pankhurst’s sister and appointed the official (WSPU) organiser in Brighton in 1909.

The report going before the committee says Visit Brighton and the authority’s arts team have promoted the appeal on their websites and social media.

Future ideas include creating a suffragette trail centre on the statue and other locations linked with the cause during this period.

Blue plaques for Octavia Wilberforce and Elizabeth Robins in Montpelier Crescent, Minnie Turner in Victoria Road and Clementina Black at the WSPU office site at the Quadrant, were funded by the Royal Pavilion and Museums.

The report said “A representative of the Appeal group recently met with the council’s Head of Engagement at the Royal Pavilion and Museums to discuss the profile of women within the city’s museums, which includes clearer representation of the suffragettes, for example through the education work at Preston Manor, which focuses on the Edwardian period.

“The Head of Engagement and the Appeal group will meet later in the year when staff have reopened all museums and can work on refreshing exhibition material.”

A public art consultation event is due to take place in October, to set out a strategy for future art in public spaces across the city.

The TECC Committee meets from 4pm on Thursday 24 September with a live webcast on the council’s website.

For details of how to donate towards the statue, visit maryclarkestatue.com.