Artist’s i360 exhibition to raise thousands for homeless youngsters

When a homeless man, huddled in a red sleeping bag, took up residence in a seafront shelter, an artist who had watched the man from his window, decided he had to help.

But as time went on, and George became a more permanent fixture, Mr Mills wanted to find another way to help out.

He said: “One night I saw him asleep and the idea came to me…paint the picture and if it sells, give him the money.”

The initial painting, 8 Miles Away (the name refers to the lights of the Rampion wind farm, 8 miles out to sea), was finished in February 2018. Just 36 hours after completion, it was sold to a woman living in Australia. The painting, along with subsequent prints, raised several thousand pounds.

Now, two years later, Mr Mills is holding an exhibition (also called 8 Miles Away) which includes seven more paintings depicting homelessness in Brighton. They are currently being exhibited at the i360 West Side event room until the beginning of  December.

Money raised from the sale of the paintings, via silent auction, will go towards helping seven homeless youngsters in Brighton and Hove.

George, the inspiration for the original painting, is now in permanent accommodation.

Mr Mills said: “I wanted the money to make a difference.  I started working with homeless charities in the city and we were able to help him.

“He had never claimed benefits so we were able to get those back dated for him.

“We got him into temporary accommodation and decided the money from the painting would go towards set up costs when he finally went into permanent accommodation.”

The Foyer, Sanctuary Supported Living, a charity working with  homeless youngsters aged between 16 and 25, will handle funds raised from the latest sale. 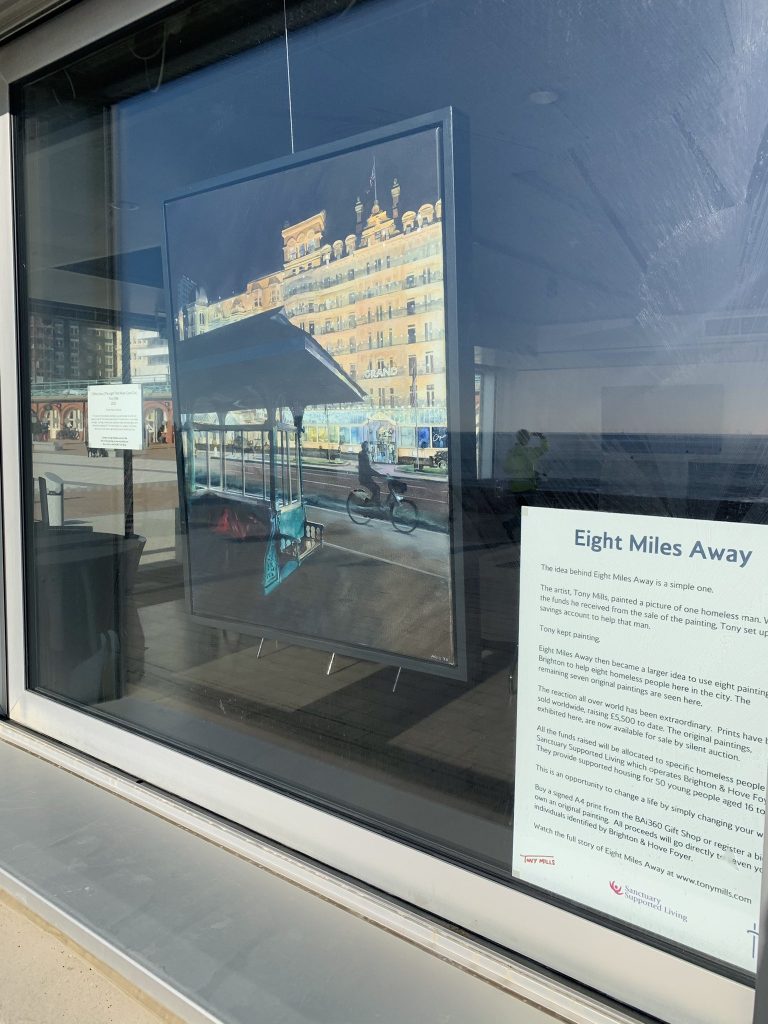 Money raised will help homeless youngsters turn their lives around.

Mr Mills, who loved art as child, did not paint for 30 years and began a career with American Express, where he still works as a Director.

He added: “I hope to inspire others. I’m just a painter who has used art to help but maybe others have music, or other skills, they can use.

“Maybe we will emerge from lockdown a more caring, thoughtful society.”

Ian Hart, Chief Operating Officer of British Airways i360 said: “We are delighted to support this great event. Tony’s 8 Miles Away exhibition and auction is an extremely valuable Brighton community project, providing eight homeless people with an essential life-changing resource.

“This is exactly the sort of local social venture that the owners and the team at BA i360 want to promote and publicise for the benefit of others. We hope that people from across the area visit the exhibition, and in turn raise valuable funds and awareness for a fantastic cause.”

If you would like to bid on one of the paintings via ‘Silent Auction’ you can do so buy visiting www.tonymills.com. The bids start at £800.

*George is a pseudonym. Mr Mills chose not to identify him because of his vulnerable status.