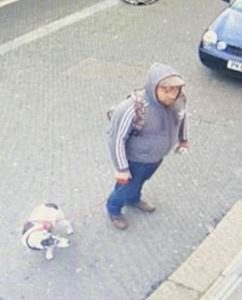 Police are trying to identify this man

Sussex Police published a security camera picture of the man who hammered at the window in Church Road, Hove, at about 3pm causing relatively minor damage.

The force said: “Detectives are appealing to identify the man pictured after damage was caused to a window in Hove.

“Police received report of a man hammering at the window of an office using a dog lead in Church Road at 3pm on Wednesday (30 December).

“The man was wearing jeans, a hoodie with stripes, he had a small dog with him and left the scene westbound towards the city centre.

“Officers are keen to identify and speak to the man about his motivation for causing the damage.