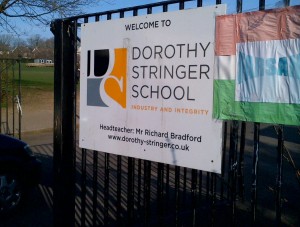 Parents of children who have been allocated places at schools miles away from home say they are angry after discovering money meant to be spent on boosting capacity at their preferred school was instead partly spent on a fence.

Dorothy Stringer was allocated £2 million extra money in 2018 to help it take an extra 90 pupils over three years, while Varndean permanently increased its intake by 30 a year.

Of that, £280,000 was spent on temporary classrooms and further sum on refurbishing the toilet block. But there are still only ten girls’ toilets – and £136,000 of the money was spent on installing a perimeter fence rather than extra capacity.

Meanwhile, as children have left the school their places have not been filled, and the school now only has 31 extra pupils, not 90.

Caroline Lucas said this week she was now pushing for extra money to be released so that improvements which should have been made two years ago could be made now.

But she said Dorothy Stringer’s head Matt Hiller had told her in a virtual meeting that the extra pressures of this pandemic year meant the school was standing firm and saying it could not take another bulge.

Amy Hyland, who started a petition pleading for another bulge class, said: “We really don’t understand how this can happen – the funding was intended for the accommodation of bulge classes and some of it now appears to have been allocated to a fence and gate.

“If those funds had been spent on toilets and other facilities then surely there would be room to accommodate another bulge year?

“Councillors keep telling us that all schools in the city are rated as “good” however this has never been a concern – these children are being dispersed across the city, facing long journeys on multiple public buses, without any friends.

“This will have a devastating impact on them yet the council are not willing to help, these children have been completely let down.”

Anna Cole said: “We have been told that the reason our children have been sent to schools out of catchment, miles away from home, is because of pressure on the facilities at our catchment school.

“I find it unbelievable that the school is allowed to spend basic needs funding that, as I understand it, was designated for improving facilities such as toilets and communal areas, on a fence.

“Surely now that it is clear that there are excess children in the catchment again this year the money should be reallocated to improving the facilities so that the school can accept those children?”

Another parent, who wished to remain nameless, said: “The admissions authority and the school are both stating that the reason for refusal of more pupils this year is one of capacity of amenities. This is despite the school having less pupils now than it did with the previous bulge classes.

“If the school had used the funds appropriately two years ago 62 families would not be facing the awful situation we are now in.

“Urgent questions must be asked of the council and the school regarding this misuse of public money.

“We have been met with a wall of silence from the council and the school and it appears that the misuse of public money may be a reason why.

“If any administration puts a fence and gates above the education and welfare needs of our children then they are not fit for office and should be thoroughly ashamed.”

Ms Lucas said: “I fully understand how angry and upset many families feel over this, particularly coming, as it does, after such a difficult year for our young people.

“The clear message from both the local authority and the school is that, unfortunately, there’s no extra space, and already far too much pressure on toilets (there’s only provision for 10 toilets for girls, for example), and the canteen etc.

“I am pressing for funds to be released to enable more toilets, and other improvements, to be built – as they should have been two years ago – but sadly that won’t help the current group of children who haven’t been allocated a place.”

She added: I’ve always done what I can to support parents and pupils affected by allocation problems when bulge years have happened in the past.

“However, with the schools indicating that they simply cannot increase their capacity because of the pressures they face this year, it does complicate the situation and further restricts alternative solutions.”

A council spokesman said: “The council has kept the decision under review. But given all the circumstances we are satisfied that it is not appropriate to impose bulge classes.

“Schools and the council have a duty of care to all pupils as well as to each new intake. The logistics of managing a school in terms of the physical space available, health and safety issues and timetabling are extremely complex.

“Even with the additional temporary classroom space provided to accommodate previous bulge classes we believe that further increase in the size of the schools has the potential to compromise the educational offer to pupils.

“This year, in addition to some of the previous logistical issues, with the ongoing pandemic it has also been important to consider the health and safety implications of placing more pupils into the existing footprint of the schools.

“The council does not believe this is necessary, given the school places available in the city as a whole.”

The spokesman also said that although the school routinely has 12 forms a year, which at 30 pupils a class could accommodate an extra 30 pupils across the year, some practical lessons are taught outside form groups and so would require more space.

He added: “There are other schools in the city who will be able to accommodate these children without having a detrimental impact on the educational offer by necessitating an increase in class sizes.”

A spokeswoman for Dorothy Stringer said: “Practical subjects have a maximum capacity and therefore adding additional numbers would mean that we would not be able to teach these subjects in specialist rooms.

“The funding has been allocated to a number of projects, including temporary classrooms which currently house languages and an additional photography classroom.

“A toilet block has been refurbished, however this is the only block in the school. The fencing has been completed, as this had been identified by previous Ofsted reports as a safeguarding issue.”

There are 62 children living in the joint catchment for Varndean and Dorothy Stringer who haven’t been given a place.

And because of the way Brighton and Hove City Council’s lottery allocations system works, these pupils are at different schools and have been sent to schools all over the city, meaning most children won’t know anyone at their new secondary school.

These plans followed the scrapping of more ambitious plans to build a new school in East Brighton and comprehensively redraw the catchments across the city.

Dorothy Stringer and Varndean then released a joint statement which said it was making the offer to avoid “unnecessarily unsettling our school communities, adversely impacting accessibility and travel time to schools.”

Meanwhile, both BACA and Longhill remain undersubscribed, which means they miss out on crucial funding based on pupil numbers.

Pupil numbers are forecast to drop over the coming years which the council hopes will mean there will be enough places at Varndean and Dorothy Stringer – but suggests a bleaker outlook for pupil numbers at the east Brighton schools.